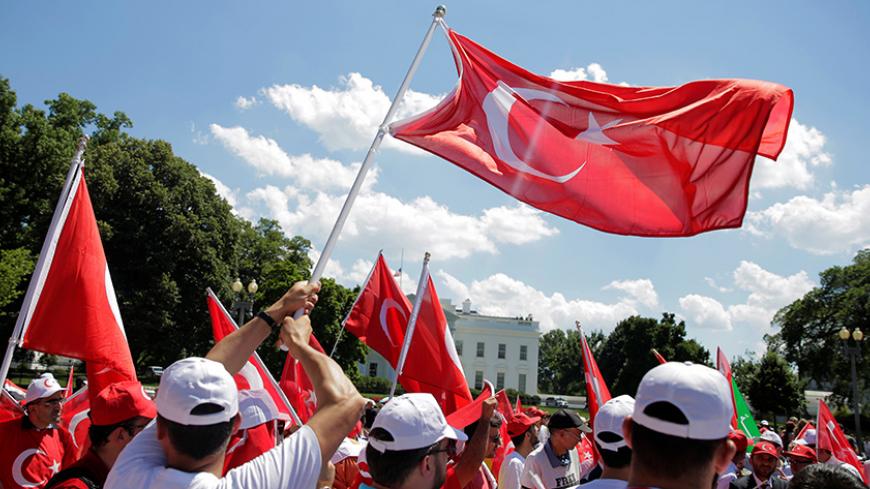 Turkish demonstrators rally against the coup attempt in Turkey at the White House in Washington, July 17, 2016.

Turkish President Recep Tayyip Erdogan has long accused Washington of siding with his country's enemies in Syria and harboring them inside the United States.

Heady after the failure of a coup he has called a "gift from God," the Turkish president now seems convinced he can force the United States to rethink its support for the Syrian Kurds and turn over his Pennsylvania-based nemesis, Fethullah Gulen. Erdogan demanded the cleric's extradition at an Istanbul rally on July 16, less than 24 hours after the coup attempt.

"I call on the United States and President Barack Obama: Dear Mr. President, I told you this before, either arrest Fethullah Gulen or return him to Turkey. You didn't listen," Erdogan said ominously. "If we are strategic partners or model partners, do what is necessary."

The Obama administration has demurred, warning that any such action would need to go through the legal system — a process that could take months or even years. Gulen has denied any involvement in the coup and insists he is being scapegoated.

"Give us the evidence, show us the evidence," Secretary of State John Kerry told CNN July 17. "We need a solid legal foundation that meets the standard of extradition in order for our courts to approve such a request."

Long before the high-stakes diplomatic spat exploded onto the public scene, Turkey had been taking steps to make just such a case.

The embassy in Washington hired international lawyer Robert Amsterdam in October 2015 for $50,000 a month to shut down a network of Gulen-affiliated charter schools that the Turks say generate a half-billion dollars a year. That contract is in addition to the $1.7 million Turkey spent in 2015 on its general lobbying arrangement with the Gephardt Group of former House Majority Leader Dick Gephardt, D-Mo., and its six subcontractors.

Amsterdam's firm suffered a setback in December when a court in Pennsylvania threw out a lawsuit on behalf of three Turks who claimed their human rights were violated by the cleric's religious followers. Erdogan claims Gulenists operate a "parallel state" and has used the coup to further purge the ranks of alleged Gulenist sympathizers throughout the public sector.

The firm has also filed legal complaints against the charter schools in California and Texas, alleging that they're violating immigration laws and ripping off consumers. Amsterdam has put together a small army of lobbying and public relations firms to help make its case in court and in the press, hiring one new subcontractor every month during the first six months of 2016, according to lobbying disclosure records. And he has personally met with legislative aides to top members of the House and Senate Judiciary Committees, including Rep. Jason Chaffetz, R-Utah; Sen. John Cornyn, R-Texas; Sen. Dianne Feinstein, D-Calif.; and Sen. Ted Cruz, R-Texas.

"What we've been doing is explaining to a bunch of people what he's been doing in the United States," Amsterdam told Al-Monitor. "It's a massive, massive conspiracy that they're involved in."

Amsterdam said he's had to hire regionally focused firms to counter Gulenist influence nationwide. He estimated pro-Gulenist lobbying nationwide at anywhere from $7 million to $12 million — not including donations to political candidates — but offered no concrete evidence.

"We can't even begin to keep up with what they're spending, and they're doing it on the state, federal and local level," Amsterdam said. "He uses these political donations to try to shelter his conduct."

As part of its contract, Amsterdam's firm has also been retained to "provide legal advice and representation related to the extradition of persons from the United States to Turkey as required by treaty.” Amsterdam said the Turkish government itself has handled extradition-related issues for now, but that his firm had to cover "every eventuality" as part of its lobbying registration with the US Justice Department.

"That activity is conducted by Turkey, though obviously if asked I would support it in any way," Amsterdam said. "I'm sure there will be further filings [with other lobbying firms] down the road as well."

Gulen and Erdogan are former Islamist allies in Turkey's ruling Justice and Development Party who had a falling out in 2013. The influential cleric has lived a quiet life in a Poconos compound for the past decade and a half, but his supporters have long been suspected of playing a powerful role behind the scenes.

"You must move beyond into the arteries of the system without anyone noticing your existence until you reach all the power centers," he famously said in a 1999 sermon broadcast on Turkish television.

Gulen's supporters are believed to be behind Turkish-American nonprofits such as the Turkic American Alliance, the Rumi Forum and the Rethink Institute, as well as a number of political action committees especially active in states where Gulenists operate charter schools. Gulenists may also have funded some 200 congressional trips to Turkey over the past decade, according to a USA Today investigation. As Ankara has intensified its crackdown, the pro-Gulen umbrella group Alliance for Shared Values in May hired the powerhouse Podesta Group to lobby on "human rights issues."

"For more than 40 years, Fethullah Gulen and Hizmet participants have advocated for, and demonstrated their commitment to, peace and democracy," the Alliance said in a statement as the coup was unfolding. "We have consistently denounced military interventions in domestic politics."

Ankara for its part can count on an assist from sympathetic associations such as the Turkish Coalition of America, the Turkish Heritage Organization and the Turkish Institute for Progress. The former has spent more than $1.1 million to fund 178 congressional visits with Turkish officials since 2000, according to LegiStorm, while the latter two have hired a total of three firms over the past 10 months to lobby on behalf of US-Turkish relations.

Adding to the mixed messages, representatives for the secularist opposition Republican People's Party and the pro-Kurdish Peace and Democracy Party also have offices in Washington, which they've used to warn against Erdogan's authoritarian drift and get expatriate voters organized.

While the focus for the foreseeable future will remain on the failed coup and its aftermath, Ankara isn't expected to let down its lobbying against US support for the Syrian Kurds who are carving out a de facto Kurdish state on Turkey's southern border. The US military relies on the so-called People's Protection Units (YPG) to fight the Islamic State (IS) because of a dearth of Sunni Arab allies in Syria, but Turkey says they're a terrorist group aligned with Turkey's banned Kurdistan Workers Party.

As the leader of a NATO ally on the front lines of the war against IS, Erdogan has quite a few ways to exert pressure on Washington to rethink its alliances in Syria. Ankara turned off the power at the Incirlik Air Base used by US strike aircraft for a week after the coup, forcing the US Air Force to rely on a backup generator and curtail anti-IS operations while YPG fighters were getting clobbered.

Erdogan has also purged hundreds of top military officers who regularly work with their US counterparts, upending the bilateral military relationship. All that has some US observers worried that Turkey's efforts to repair relations with Russia and Israel are but the prelude to a larger scale pivot away from the United States if Erdogan doesn't get his way.