Turkey is lobbying heavily to try to rekindle a once-promising relationship with the administration of President Barack Obama that has markedly deteriorated over the past year. 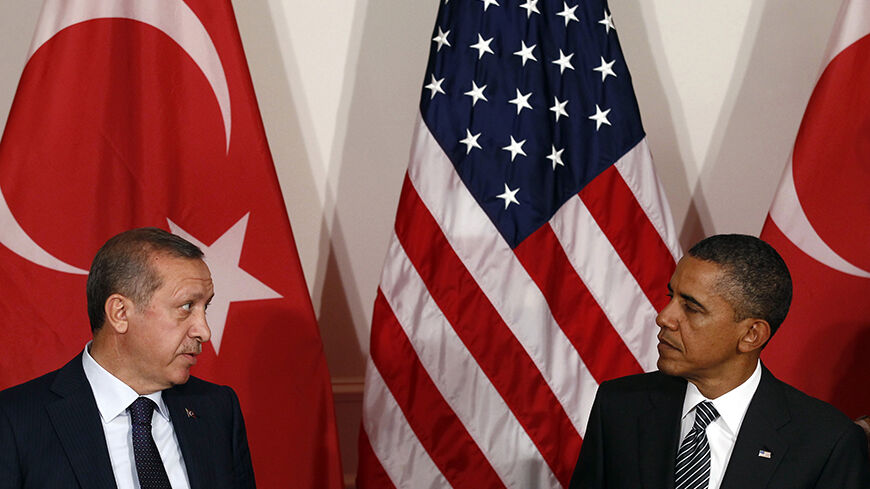 Turkey is lobbying heavily to try to rekindle a once-promising relationship with the administration of President Barack Obama that has markedly deteriorated over the past year.

Back in 2009, Obama made Ankara his first stop in the Muslim world and held up Turkey as a model for bridging Islam and the West. Relations have since soured significantly, with the two countries at odds on a host of foreign policy issues ranging from Syria to Egypt to Israel even as Washington grows increasingly critical of Prime Minister Recep Tayyip Erdogan’s crackdown on dissent.

“In the past, I was calling him directly,” Erdogan said of the US president in a July 21 interview with Turkey’s ATV. “Because I can't get the expected results on Syria, our foreign ministers are now talking to each other."

Dwindling patience on the US side, meanwhile, was on full display during the July 15 nomination hearing for Obama’s pick for ambassador to Ankara.

“Are you concerned about Prime Minister Erdogan’s desire to change the constitution and other actions that we have seen on the part of Erdogan as a drift toward authoritarianism?” Sen. John McCain, R-Ariz., asked John Bass. McCain went on to warn that he would hold Bass’ nomination unless he answered.

“It is a drift in that direction, yes,” Bass replied.

Turkey is spending upward of $2 million a year on lobbying and public relations to help reverse that impression.

Gephardt and Gruaz have their work cut out for them.

Turkey and the United States don’t see eye to eye on a number of issues, with Erdogan’s Islamist government sharply critical of Israel and the Egyptian military’s overthrow of former President Mohammed Morsi while urging Obama to step up US armed assistance to the rebels fighting President Bashar al-Assad in Syria. Allegations that Turkey outed Israeli intelligence agents in Iran and considered buying a missile defense system from China have also undercut Turkey’s ability to buy US weapons, notably drones, according to the Congressional Research Service.

On a positive note, Secretary of State John Kerry gave Turkey a boost on the diplomatic stage when he turned to Ankara to help negotiate a cease-fire in Gaza. And Vice President Joe Biden has expressed interest in negotiating a free trade agreement with Turkey, which fears the repercussions of being left out of the proposed US-EU trade deal.

In Congress, resolutions slamming the Erdogan government’s restrictions on Internet and press freedom — Turkey is the world’s biggest jailer of journalists — have been introduced this year in the House and Senate. And in June, the House Foreign Affairs Committee passed bipartisan legislation requiring the State Department to report on its efforts to persuade Turkey to return Christian sites and objects to their “rightful owners.”

“Attempts by anti-Turkish circles in the US Congress, driven by domestic political considerations, to push such unconstructive and baseless initiatives are unacceptable,” a furious Turkish Foreign Ministry immediately responded.

The statement is an oblique reference to the powerful Armenian-American lobby, which has long pushed for Congress to label the killing of an estimated 1.5 million Armenians under the Ottoman Empire as “genocide.” In addition, last year, Jewish and Greek members of Congress — two groups that have strained relations with Ankara — joined forces to launch the Congressional Hellenic-Israel Alliance, further exacerbating Turkish grievances.

“One of the issues on Capitol Hill that’s of concern to most Turkish-Americans is the lack of balanced dialogue on the Hill,” Lincoln McCurdy, president of the Turkish Coalition of America (TCA), told Al-Monitor. “So a lot of our efforts are educational, trying to present the Turkish perspective on historical issues and current events.”

While the privately funded group doesn’t work for the Turkish government, it provides an assist on issues of concern to the estimated 500,000 Turkish-Americans, notably in opposition to the genocide language. The organization is also one of the biggest private sponsors of travel for lawmakers and their staff, having organized 170 trips worth a total of $1.09 million since 2000, while its Political Action Committee gave $139,775 to political candidates in the 18 months to June 30.

TCA was founded in 2007 by Massachusetts microchip millionaire Yalcin Ayalsi, whose family has spent hundreds of thousands of dollars in political contributions over the years to members of the 144-member Congressional Caucus on US-Turkish Relations and Turkish Americans. The caucus is co-chaired by Reps. Ed Whitfield, R-Ky., Virginia Foxx, R-N.C., Steve Cohen, D-Tenn., and Gerald Connolly, D-Va.

“I am fearful that in our haste to make a statement that provides understandable comfort to our constituents, we are going to rupture one of the most important bilateral relationships we have right now,” Connolly said in opposition to the Christian churches bill.