Turkey has shut down the country's first and only Kurdish-language channel for kids, dealing a blow to efforts to keep the children connected to their culture. 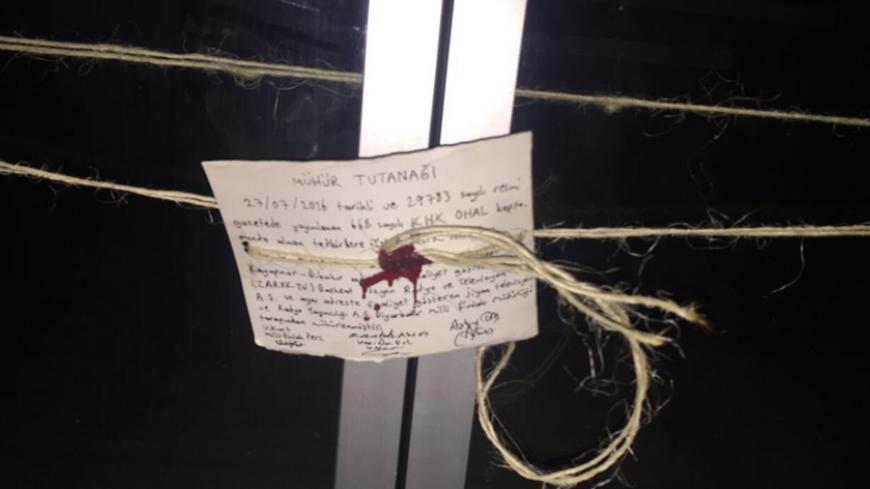 A seal on the door of the Kurdish-language children's TV channel Zarok TV, put in place after the channel was closed down by Turkish authorities, Diyarbakır, Turkey, Oct. 4, 2016. - Twitter/‏@doganburak29

DIYARBAKIR, Turkey — The Smurfs, Maya the Bee and SpongeBob SquarePants finally started speaking Kurdish in Turkey last year, courtesy of Zarok TV, the country’s first and only Kurdish-language channel for children. But their voices were silenced last week as the channel fell victim to the Turkish government's continued purging since the July 15 failed coup.

The station’s debut in March 2015 came as the latest in a series of hard-won cultural freedoms for Turkey’s Kurds who, until the early 1990s, were banned even from speaking their language. The channel was meant to be more than just a pastime for children, doubling as a vessel to teach them their mother tongue and help them maintain a bond with it.

Only 19 months later, Zarok TV (Kid TV) was back in the headlines, this time as the first children’s channel to be shut down for backing “separatist and subversive” activities in Turkey. The Sept. 28 closure order, which covered 23 radio and television stations, took effect abruptly late in the evening, leaving many people bewildered in front of empty screens. It was part of the massive crackdown Ankara has waged, using extraordinary powers made available by a state of emergency, against suspected coup supporters and others. Though the coup bid was blamed on Fethullah Gulen’s community, the clampdown has extended to Kurds and other “dissident” groups.

Many social media users went into lampoon mode, asking, “Who is the separatist: SpongeBob or Papa Smurf?”

Dilek Demiral, Zarok TV’s chief broadcast coordinator, has difficulty understanding how the channel might have irked the government. Kurdish-language TV stations are no stranger to bans in Turkey, but hardly anyone expected a children’s cartoon channel to join the club. A perplexed Demiral told Al-Monitor the channel had never received even a warning penalty from the Higher Board of Radio and Television (RTUK), the government's media watchdog, which many consider to be heavy-handed.

Demiral said the decree the government used to close the stations “speaks of separatist and subversive broadcasts and channels” affiliated with the so-called Fethullah Gulen Terror Organization, a term Ankara uses to refer to Gulen followers.

“We are struggling to understand what sort of separatist and subversive activity we could have possibly engaged in [by] broadcasting cartoon movies by world-famous producers,” she added.

The first Kurdish-language channel to reach Kurds in Turkey was Med TV, which began broadcasting from Britain in 1995 as bloody conflict simmered in Turkey's southeast between the security forces and militants of the Kurdistan Workers Party (PKK). The channel, which was supportive of the PKK, drew large audiences hungry for Kurdish-language programs, and satellite dishes soon became a fixture on rooftops in the region.

In the late 1990s, Kurdish-language broadcasts began from inside Turkey, sometimes legally and sometimes not. Their numbers grew in the next decade as Ankara came under European Union pressure to expand Kurdish rights. By 2009, even public broadcaster TRT had a Kurdish-language channel.

It was against this background that Zarok TV was born for the youngest of Kurdish audiences. Before its inauguration, the Diyarbakir-based station surveyed thousands of children to fine-tune its programming and had several months of test runs. Officially licensed by RTUK, it was formally launched on March 21, 2015, the day on which the Kurds celebrate Nowruz, their traditional New Year. The channel became an immediate hit, broadcasting popular animations dubbed in the Kurdish dialects of Kurmanji, Zazaki and Sorani, as well as several homemade programs.

Along with other Kurdish channels launched around the same time, Zarok TV was seen as a welcome byproduct of peace efforts underway between Ankara and the Kurds. In a community where many children grow up speaking only Turkish, especially in urban areas, thousands of Kurdish families came to rely on Zarok TV to teach their children their native language.

Demiral recalled how prominent this sense of linguistic mission was in creating the channel.

“When we were starting out, we made a promise to do whatever we can to make sure the new generations don’t go through the same language problems we experienced as children, so they can have fun and do whatever their peers do, in their own language,” she said.

“We tried to keep our promise and did bring our broadcasting quality to a certain level. Very emotional messages are now coming from Kurds across the world,” she said. “How can a channel be closed without any justification, without a single warning penalty in its past? We want to believe this decision was made by mistake, and we expect it to be rectified in the shortest possible time.”

The state of Turkey’s media scene, however, offers little reason for optimism. In a joint condemnation of the government’s latest onslaught, a group of press organizations said the number of jobless journalists in Turkey jumped to more than 10,000 — up from 7,000 — as dozens of media outlets have been closed since the coup attempt. Almost one-third of journalists are now out of work in Turkey.

The case of Zarok TV, an entity with no political aspect, has led many to believe that the government can ban anything Kurdish simply for being Kurdish. In only 19 months, a cartoon channel — perhaps the cutest reflection of Kurdish hopes — has turned into a gloomy symbol of their eclipse.