Turkey’s first Kurdish-language institute has been torn between the government and the Kurdish movement, while attracting scholars from all four parts of Kurdistan. 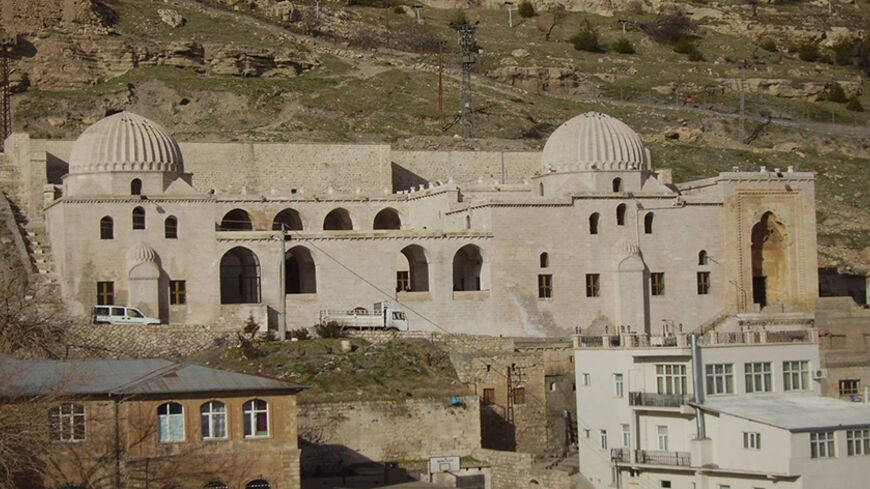 A promotional photograph depicts Artuklu University on a hillside in Turkey’s southeastern city of Mardin, Nov. 13, 2014. The Institute of Living Languages, Turkey’s first Kurdiology department, was founded at the university in 2010. - Artuklu.edu

The Institute of Living Languages, founded in 2010 at Artuklu University in Turkey’s southeastern city of Mardin, was one of Ankara’s most tangible steps in efforts to resolve the Kurdish problem. It became Turkey’s first Kurdiology department and the first to teach the Syriac language. Described as a “revolution” by President Recep Tayyip Erdogan, the institute has been a glimmer of hope amid the many snags hampering the Kurdish peace process.

Yet, the institute has faced obstacles and threats ever since its foundation, and has irked both Ankara and the Kurdish movement. The government was annoyed by the profile of the institute’s academic staff and the aspiring teachers it trained as well as the invitation extended to dissident journalists for its first graduation ceremony. The Kurdish movement, for its part, saw the institute as a government tactic to dilute their demands for full-fledged education in the Kurdish language. The project infuriated also the deep state’s apparatus, haunted by hysteria that Turkey was being dragged into partition.

Al-Monitor has learned that the security forces made their discontent known in various ways and the institute’s administrators received anonymous threat letters.

Security clearance investigations of Kurdiology students reflected the level of resistance against the Kurdish opening in the state establishment. In 2012, 480 out of 500 students admitted on the basis of their command of the Kurdish language and literature were deemed objectionable because of their political leanings. Eventually an investigation of institute Director Kadri Yildirim began, on allegations the institute was selecting its staff from among supporters of the Kurdistan Workers Party (PKK) and the pro-Kurdish Peace and Democracy Party (BDP).

The investigation, however, has failed to produce any incriminating evidence, Yildirim said. “We admitted the students not on the basis of security clearances but their level in Kurdish. This got me in trouble. I was accused of favoring people from objectionable circles. A probe was launched against me, but nothing has come out of it. It seems they couldn’t find anything over the past two years. They have not informed me of any conclusion,” he said.

Tensions with Ankara have plagued the institute ever since its inauguration. In 2012, after the institute admitted the first group of 500 students, selected from 3,000 candidates, the Higher Education Board (YOK) slashed the program’s contingent by half. This led the institute to warn it would withdraw from programs to train teachers and prepare textbooks for selective Kurdish language courses in public schools unless all students who passed the exam retained their right to study at the institute.

Despite lingering misgivings, the institute graduated 1,000 people in two years, which is a remarkable achievement. But as the other legs of the Kurdish opening faltered, the graduates, who had enrolled in the program hoping to become teachers of selective Kurdish language courses introduced in public schools in 2012, were left unemployed. In August, they went on a hunger strike after the Education Ministry failed to allow openings for their recruitment. In talks in Ankara, Yildirim warned he would join the hunger strike if the problem persisted. The ministry was eventually compelled to recruit 18 teachers.

In remarks to Al-Monitor, Yildirim said their determined efforts had led both the government and the Kurdish movement to change their attitudes. He believes the attendance of both government officials and BDP lawmakers at this year’s graduation ceremony is a sign of prejudices being broken.

According to Yildirim, the institute’s progress and outstanding problems can be summarized as follows:

Yildirim recounted a tense episode over the letters Q, X and W, which Kurds were banned from using until last year in their names and writings on the grounds that those letters did not exist in the Turkish alphabet. “In the days when the ban was still in force, we were to write a textbook for the Education Ministry. We were warned against using Q, W and X. I told them we would pull out from the textbook project, for nothing is left of the Kurdish alphabet without those letters. We stood firm and eventually used the letters both in textbooks and dissertations,” he said.

In comments on the thawing prejudices, Yildirim said, “The state accused us of being BDP sympathizers, while the Kurds claimed we were in the service of the [Fethullah Gulen] community. This year, however, we felt relieved. Erdogan sent a message of congratulations for the graduation ceremony, while Mardin Mayor Ahmet Turk and Gursel Yildirim from the [pro-Kurdish] People's Democracy Party (HDP) attended the ceremony. When Erdogan visited Mardin during his presidential election campaign he praised our work. The BDP-HDP quarters, too, began to understand that we are engaged in purely academic activity. People have come to see that our only aim is to revive an assimilated language and culture. For the first time we have received acknowledgement from both the government and the opposition.”

Erol Dora, a HDP lawmaker for Mardin, said they had no objections to the institute itself, but argued that the government often used such initiatives as a distraction tactic. “The graduated teachers are not even recruited. If they really want to promote the Kurdish language and help education in the mother tongue, the teachers should be recruited,” Dora, Turkey’s first Syriac parliament member, told Al-Monitor. “There are some positive developments but they fail to meet our party’s demands, which call for a more fundamental solution that goes beyond selective courses and ensures [full-fledged] education in Kurdish.”

Some scholars who strive for the establishment of a Kurdiology faculty in Turkey say the Institute of Living Languages cannot be called a Kurdiology faculty, for it was not even allowed to have the word “Kurdish” in its name and, with doctoral studies off-limits, got a rather low status. They also stress that institute graduates recruited by the Education Ministry are described as “teachers of living languages and dialects” rather than “Kurdish language teachers.” As a result, they say, applications have decreased, with many now motivated not by the prospect of teaching but merely by their interest in Kurdish literature.

In sum, Artuklu University is gradually ceasing to be a conflict zone between Ankara and the Kurdish movement. But without a clear road map for a comprehensive solution, the troubles it has faced during the peace process are bound to recur. Given that the Kurdiology faculty are still receiving email threats, a more persistent effort seems to be a must.