Why is the Turkish government now targeting cartoons?

The Turkish government’s onslaught on small broadcasters with predominantly Kurdish, Alevi and leftist audiences sparks fears beyond the issue of press freedom. 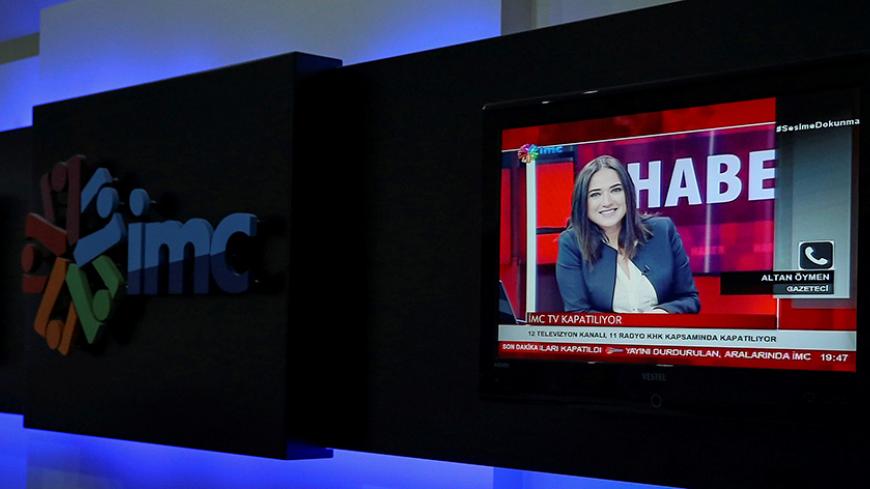 News anchor Banu Guven is seen on a screen during a news broadcast at a studio of IMC TV, a news broadcaster slated for closure, in Istanbul, Sept. 30, 2016. - REUTERS/Huseyin Aldemir

ANKARA, Turkey — Late Sept. 28, the Turkish prime minister’s office issued orders for the closure of 23 TV and radio channels on the grounds they backed separatist and subversive activities. The decision was based on a legislative decree issued immediately after the July 20 declaration of the state of emergency over the failed coup attempt five days earlier.

Using the decree, the government moved the same day to close down all newspapers and radio and TV stations linked to the Fethullah Gulen community, which is held responsible for the putsch. With the state of emergency ongoing, the same decree was employed once again Sept. 28, but this time it targeted media outlets that had nothing to do with the Gulenists. They were all broadcasters with overwhelmingly Kurdish, Alevi and leftist audiences. The channels were accused of spreading propaganda in favor of separatist and subversive activities and the so-called Fethullah Gulen Terror Organization, a term Ankara uses to refer to Gulen followers.

The closed channels include the music-only Govend TV and Turkey’s first Kurdish-language cartoon channel for children, Zarok TV. Zarok’s chief broadcast coordinator, Dilek Demiral, expressed dismay at the move to Al-Monitor. “We are a cartoon channel. We broadcast cartoons from the Cartoon Network and similar channels after dubbing them into Kurdish and Zazaki. Those include the Smurfs, Garfield and SpongeBob. How could we possibly engage in separatist and subversive activities?” she said.

The other Kurdish-language TV channels the prime minister's office targeted had news programming in their broadcasts. Judging by the scope of the decision, it seems the only Kurdish channels that were spared were those that broadcast solely music videos.

Some of the channels were not only taken off the air, but had their properties sealed. Denge TV was one of them. Channel manager Ferhat Sevim recounted what happened after their broadcast was terminated by Turksat, the country’s satellite provider, on the evening of Sept. 28. He told Al-Monitor, “We came to the studio on Sept. 29, and at around 5 p.m. police and Finance Ministry teams arrived. Our lawyer examined the decree, and it included a provision for the seizure of assets. They took the inventory of the building, then sealed the section where all the technical equipment was and took away our outside broadcast vehicle.” The raid has left the staff bewildered, Sevim said, adding, “I never expected that. We had always maintained impartiality and abided by universal broadcasting norms.”

The list of closed channels includes also TV10, which is popular with Alevis. Since Sept. 29, Alevi organizations have been holding protests, with a banner reading “TV10 is the voice of Alevis, it cannot be silenced” hung on the channel’s building. Veli Buyuksahin, the TV10 board chairman, stressed the channel was closed at the beginning of Muharram, the Islamic month held sacred in the Alevi faith. “We’ve come to a point where words fail,” he said.

The closed media outlets may be relatively small but each has a symbolic importance for being the voice of Kurdish, Alevi and socialist groups. Their closure is perceived not only as an affront to media freedoms, but also as a threat to the very existence of each of those communities.

The protest held Sept. 29 outside the building of Hayat TV in Ankara attracted mostly people of leftist socialist leaning. Al-Monitor witnessed scores of solidarity visits by representatives of trade unions, leftist socialist parties and human rights organizations to the inside of the building. Though the channel was off the air, a program featuring leaders of the Labor Party and the Peoples’ Democratic Party continued in the studio broadcast via the internet. Soon, however, the online broadcast was also cut.

Hayat TV reporter Cem Gurbetoglu, who was on duty on the evening of Sept. 28, said workers learned the channel had been taken off the air from viewers who began calling the station. “We then called Turksat and they told us our broadcast had been terminated in line with a Prime Ministry decision. We have received no official notification so far,” he told Al-Monitor.

Gurbetoglu said he was on duty also on the night of July 15 when the coup attempt unfolded. “I was on air here, reporting that a coup attempt is underway in Turkey and taking a stance on the side of democracy. The channel as a whole took a stance on the side of democracy because our [movement] is one that has suffered a lot from military coups,” the journalist said. “Yet the aftermath of the coup attempt has turned into an onslaught on those who stood against it, against those who defend democracy and labor.” According to Gurbetoglu, the ruling Justice and Development Party has taken advantage of the coup attempt to launch “a counter-coup against its opponents.”

Radio Yon, one of the 11 closed radio stations, represents perhaps the most poignant irony in this latest onslaught on the media. Yon, which is popular with Alevis, broadcasting mostly folk music, was among the media outlets that the Higher Board of Radio and Television had thanked for their anti-coup stance after July 15.

In the 2½ months under emergency rule, the state of press freedom and free speech in Turkey has regressed far beyond the already alarming point it stood before the coup attempt. According to the Turkish Journalists’ Association, more than 100 journalists have been arrested since July 15, in addition to 2,500 who were left jobless and 660 who saw their press cards canceled.

Yet seeing things only from the perspective of press freedoms and the freedom of information leaves the picture incomplete. The opposition groups protesting the government’s latest move see the media closures as a matter of their own survival. These anxieties are bound to grow as the government appears in no hurry to lift the state of emergency.