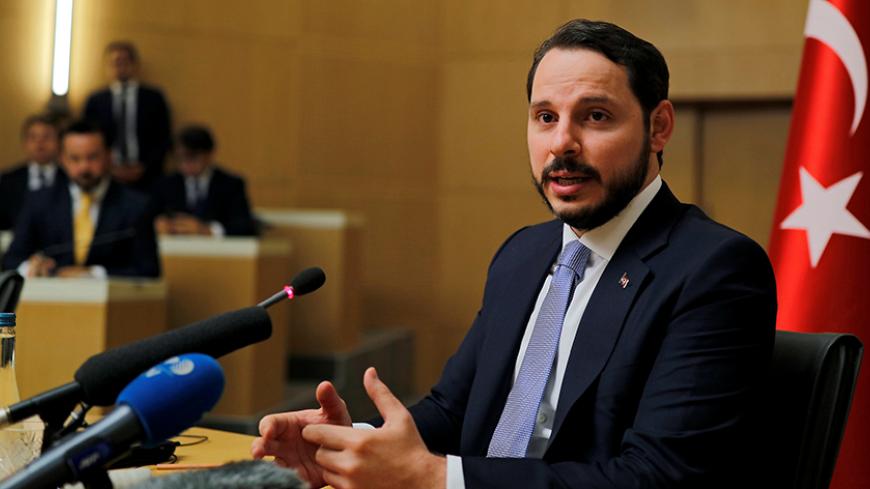 A correspondent in Turkey

On Sept. 23, RedHack, a Marxist-Leninist-Maoist computer hacking group, announced that they hacked into Turkish President Recep Tayyip Erdogan’s son-in-law’s email accounts. Berat Albayrak is not only Erdogan’s eldest son-in-law, but he is also Turkey's energy and natural resources minister. RedHack demanded that Asli Erdogan, an author and human rights activist, and other imprisoned left-wing activists be released by Sept. 25 or they would release the emails to the public.

Introducing themselves as one of the world’s oldest “hacktivist groups,” established in 1997, RedHack is older than its global counterpart, Anonymous. Their activities are considered criminal according to Turkish law. Yet they have some public support. In a documentary, they explain some of their hacking activities as standing by the “oppressed against the oppressor.” Scholars in this documentary pose the question, “If RedHack is criminal, why does a generation consider the group as a hero?” It seems their operations are diverse enough to convince the public they are not after personal gain, but are rather taking risks to protect public interest. For example, in April 2012 when then-Interior Minister Idris Naim Sahin ridiculed a citizen to do cartwheels to show his appreciation, RedHack replied by taking over the ministry’s website telling Sahin it was his turn to do cartwheels for the public. They have openly challenged the Gulen movement multiple times and hacked into their webpages. RedHack carried out bold acts as well: In 2005, they hacked the police’s webpage and erased all unprocessed traffic tickets, and in 2013, they erased the debts people owed to governmental entities.

They also seem to have a sense of humor, as they have chosen nicknames after the Smurfs, such as Papa Smurf, Hard-Working Smurf and Honest Smurf. The Justice and Development Party (AKP) government has intensified its battle with the group, making arrests with terrorism charges. Since 2012 and through dozens of court cases, the government has failed to establish any sort of link between RedHack and the individuals arrested as RedHackers. RedHack has suffered attacks itself from allegedly government-sponsored hackers, such as Akincilar Group. Akincilar aimed to provide evidence that RedHack is a terror organization and has connections with armed terror organizations.

Going back to the current case of RedHack allegedly hacking into Albayrak’s email accounts, Albayrak and other government officials have been silent. They have not released any prisoners either. Once the deadline passed, RedHackers kept their promise and released photos of emails and voice recordings found in the emails to the public using social media.

The AKP government has promptly shut down multiple Twitter accounts and blocked access to the websites. On Sept. 24, police began operations to arrest those who were charged and acquitted from being RedHackers years ago.

On Sept. 28, a few marginal television channels announced they would be airing the allegedly hacked emails. On the same day, dozens of channels, known as opposition media associated with Kurdish, Alevi and leftist groups, were taken off the main satellite programming. Halk TV was still able to report some of the emails on Sept. 28.

Pro-AKP newspapers and social media accounts have started a subtle campaign claiming RedHack is now being run by the Gulen movement.

RedHack is releasing more emails from Albayrak’s account despite all censorship attempts. So what is in the alleged emails released so far? They are mostly emails sent to Albayrak and can be explained in three categories.

The first category is the intricate relationship Albayrak and other family members established with the mainstream media outlets, their owners and CEOs. Here we see two prominent issues. One is an email that shows pro-government columnist Hilal Kaplan sending emails to Albayrak with suggested speeches for the president. Second is a longer communication with Mehmet Ali Yalcindag, son-in-law of Turkey’s biggest media mogul, Aydin Dogan. Yalcindag is also the CEO of Dogan Publishing Holding. In short, he is in charge of the most popular TV channels and newspapers in Turkey. Yalcindag’s alleged emails indicate that he has a friendly relationship with Albayrak and his brother and is working rather hard to make sure news and opinion pieces released are in line with the government’s wishes. He even complains about his sister-in-law and some of the prominent editors in these emails. On Sept. 28, Yalcindag told the press that those pages were from his diaries. He said they were manipulated and they were not emails to Albayrak. He claimed hackers stole his diaries.

A recording found in Albayrak’s email account, which claims to be the voice of media mogul Dogan, tells reporters and columnists to refrain from obsessive and continuous criticism of the AKP government. He advises the writers to diversify — that is, if one day they are to criticize the government, why not the next day write about something else? If true, these releases show that even media outlets not directly owned by pro-AKP figures are controlled by them.

There were also emails about the budget for the AKP’s social media trolls as well as strategies to brand the Gezi movement as being supported by foreign capital, such as “Armenian businesses.”

The second category of emails contains individuals demanding Albayrak find a job for themselves, their husbands and their family members. These leaked emails generate another layer of proof for the depth of clientelism and nepotism. There are emails with resumes attached asking for government positions. Also, leaked emails show discussions about who should be on the nomination list for parliament seats.

The last category of emails is the broadest: family and friends. One popular email was from former Turkish Minister of European Union Affairs Egemen Bagis, who referred to Steven Cook, an analyst for the Council on Foreign Relations, as a “top pro-Israeli lackey.” Cook has criticized Albayrak in a Politico article. Bagis congratulates Albayrak, saying this shows Albayrak is on the right path. There are also emails from different international companies, such as a German company requesting Albayrak set up a meeting with Erdogan and an email where a map presents information to Albayrak about the routes Islamic State members enter Syria.

Yet the most popular emails in this category — judging by the intensity of social media activity — are the chatter about intra-AKP feuds. RedHack has signaled that there are several emails indicating how AKP members are in stiff competition. In one of those emails, a senior Erdogan adviser refers to another senior adviser as a “ticking bomb” and cautions the family that this person’s statements are inappropriate for public consumption.

RedHack has also announced that they would not share personal communications between Albayrak and his wife, indicating they mean business and respect privacy, to an extent. Yet they have shared a couple of photos of Albayrak’s family in Ottoman Palace costumes with the note, “We know this was your dream [to establish a sultanate], we will crush them.”

The leaked and unverified emails will not be sufficient to influence AKP’s base voters, but they have shown the divisions within Turkish society are deeper and more layered than any observer realized.