A mix of traditional Turkish fears and the Justice and Development Party's political ambitions has come to shape Turkey’s regional policies, especially in Syria and Iraq. 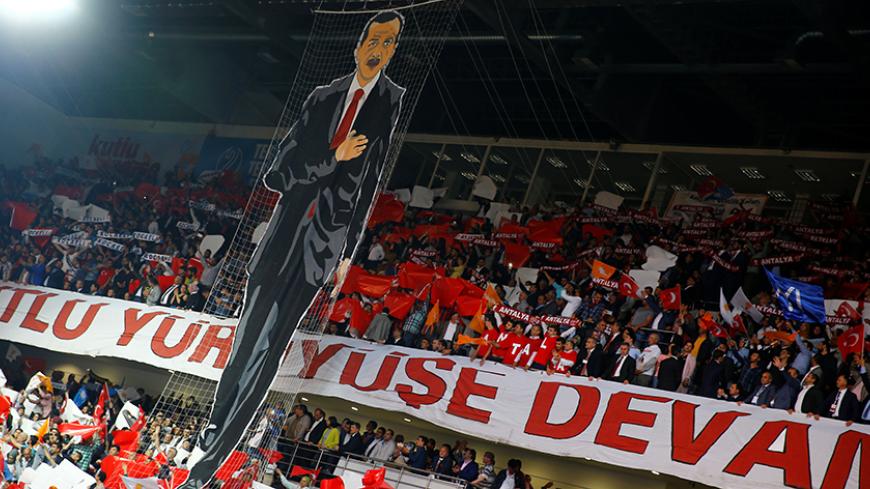 A banner depicting Turkey's President Recep Tayyip Erdogan is seen during a meeting of the ruling Justice and Development Party to choose the new leader, in Ankara, May 22, 2016. - REUTERS/Umit Bektas

“No issue in the Middle East can be discussed without Turkey.” So spoke Foreign Minister Ahmet Davutoglu in March 2013 as he boasted how the Justice and Development Party (AKP) had transformed Turkey from a country that “sought help from others 10 years ago” to a country that leads “an active foreign policy” and sees “the whole world” as the domain of its diplomacy.

More recently, on Oct. 22, President Recep Tayyip Erdogan grumbled about how the 1923 Lausanne Treaty, which led to the creation of modern Turkey on the ashes of the Ottoman Empire, “shrank our lands to 780,000 square kilometers [480,000 square miles] from 2.5 million square kilometers [1.5 million square miles] in 1914.” Things had to change, according to Erdogan. “Those who have kept Turkey confined to this vicious circle since 1923 have sought to make us forget the millennium-old memory of our lands.” he said. “We can’t go on with the psychology of 1923 in 2016. We can’t take pride in having preserved our 1923 posture while everything in the world has been changing since we established the republic. We have to abandon the notion of ‘defense lines’ in protecting the republic. … We have to resolve the Mosul issue at Mosul.”

Such AKP outbursts have often been criticized as neo-Ottomanism, expansionism and sectarianism. Such criticism has recently escalated, with added reproofs of irredentism fueled largely by Erdogan’s emphasis on a new security policy, which could be summarized as “intervention in developments that threaten the country’s interests and security, regardless of where they happen.”

Examples of this new approach include Turkish operations against the Islamic State (IS) and the Kurdish Democratic Union Party (PYD) on Syrian soil; Turkey’s military presence in Iraq; eagerness to take part in the liberation of Mosul; vocal objections to Shiite dominance in the area; and efforts to cast itself as Mosul’s protector. What does all this mean in political terms? To what extent is the AKP’s ideology swaying Turkey’s foreign policy?

Under the AKP, Turkey’s Middle East policies have been driven by two main factors: fear and ambition. The Kurdish question and the refugee problem lie at the core of its fears. In Ankara’s eyes, the Kurdish hegemony in northern Syria, the PYD’s expanding sphere of influence and the corridor it seeks to create along the Turkish border represent an existential threat to Turkey’s territorial integrity. The refugee waves, triggered by almost every major confrontation in Syria and Iraq, remain a serious concern, with Turkey already hosting some 3 million Syrians and wary of IS militants sneaking in in their midst.

Any development on these two issues is met with Turkish demands for response and prevention and, increasingly, with security-centered policies. No doubt, this is the government's design. Yet, sensitivities on these issues are not unique to the AKP. The fears over the Kurdish and refugee problems are shared by military and Foreign Ministry quarters, opposition forces like the Republican People’s Party and the Nationalist Action Party, and an overwhelming majority of the public. In other words, they seem to resonate with Turkey’s traditional attitudes.

But when it comes to Turkey’s ambitions, the pro-Sunni AKP’s ideological baggage and policies are indisputably the determining factor in Turkey's quest for patronage in the Sunni sphere and the region, a goal that has become increasingly pronounced since 2011.

These ambitions have always been intertwined with Erdogan’s “New Turkey” narrative, suggesting a vision that extends well beyond the confines of foreign policy. Still, foreign policy continues to play a major role in the AKP’s drive to reverse the Kemalist Republican tradition, which has been strictly Western-oriented and unwelcoming to the East and its values.

The AKP’s active, interventionist and patronage-seeking approach in the Middle East and the Sunni world has shaken the established ideological foundations of the Turkish state, but it has proven appealing to the conservative masses, imbuing them with heightened self-confidence, pride and a sense of being on par with the powerful.

Finally, it has pointed to a new perspective in fundamental strategic choices. Turkish conservatives have long nurtured a dream of challenging Western civilization — peacefully, but as a competitor. This ambition could also be described as a desire to build a different model or a political civilization that embraces the country’s religious values, cultural roots and historical institutions and concepts. This, in a sense, is what the AKP has pursued.

In foreign policy, this orientation has been demonstrated in the importance the AKP places on the Middle East and the Muslim and Arab worlds and the leading role it has sought to play there. This close contact, involving assertive and hard-line regional engagements, especially in the Arab world from Iraq and Syria to Egypt and Palestine, has inevitably pushed Turkey into the heart of the region’s hallmark conflicts — Sunni versus Shiite, Salafists versus constitutionalists and East versus West.

What really opened the way for AKP ambitions, however, was the Arab Spring. Essentially a Sunni-world story, the Arab Spring unleashed Islamic energy into the political realm, leading to new contacts and bonds between Islamic movements and politics. Both Salafist movements and those in the sphere of representative democracy like the Muslim Brotherhood and Hamas became the various and somewhat rival channels of this contact. For the Turkish conservative elite, it was an irresistible opportunity to build a realm, a civilization or a sphere of influence.

As the Arab Spring unfolded, Turkey stood up against authoritarian structures and at the same time, by supporting movements like Egypt’s Muslim Brotherhood via the idea of representative democracy, promoted another, unnamed idea: Sunni pluralism. Most importantly, it pursued a balancing role against Iran’s Shiite-corridor policy.

The failure of the Arab Spring did not end the AKP government’s ambitions. Rather, its shifting interests dragged it into an anti-Western stance, resulting in tensions with the United States. The AKP’s ambitions have persisted in Syria and are today hovering around Mosul in Iraq, compounded with a notion of natural patronage derived from Ottoman history. In sum, this spiral of fears and ambitions is greatly informing Turkey’s foreign policy today.