Shared cultural heritage often leads to cuisine wars between Turkey and its neighbors. 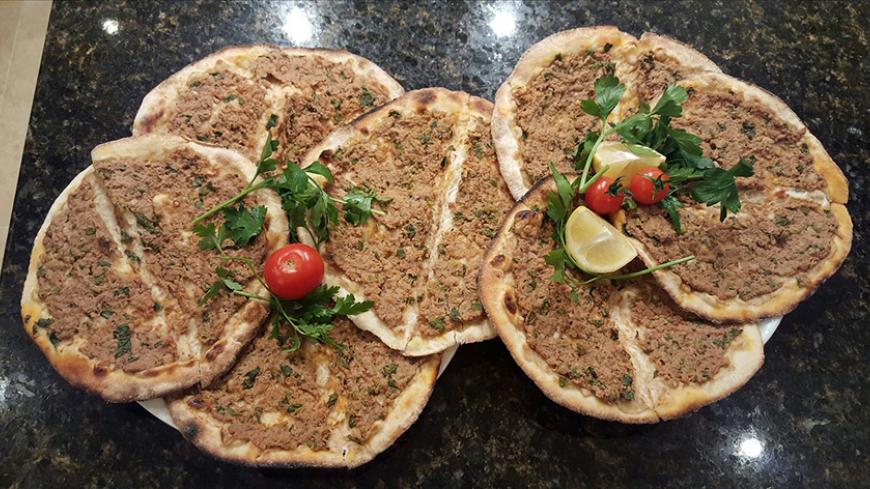 Lahmacun, or lamadjo, is a traditional food that is contested by both Turkey and Armenia. - Twitter/@ElcinJundi

Earlier this month, a Turkish newspaper reported that a new crisis was brewing between troubled neighbors Turkey and Armenia. The disputed issue this time is a popular foodstuff called “lahmacun” in Turkish and “lamadjo” in Armenian. According to the report, the Armenians had launched an international drive to promote it as an Armenian dish, opening two restaurants in Russia. The report sparked indignation among Turks, who also claim ownership of the dish, which is a thin piece of dough, topped with minced meat, vegetables and spices, ideally baked on a wood fire. Some television programs even took it upon themselves to explain why it was Turkish food.

The notion of food threatening diplomatic tensions may sound amusing, but Turkey and Armenia are already involved in a similar row on an international level over lavash, a thin flatbread similar to a tortilla. The crisis began after Armenia had lavash inscribed on UNESCO’s List of the Intangible Cultural Heritage of Humanity as “an expression of Armenian culture” in 2014. The decision drew protests from Turkey and other regional countries. Earlier this year, Turkey, Azerbaijan, Iran, Kyrgyzstan and Kazakhstan submitted a joint file to UNESCO, presenting lavash as a regional culinary heritage. The issue will be now discussed at UNESCO’s Intergovernmental Committee for the Safeguarding of Intangible Cultural Heritage, scheduled to meet Nov. 28 in Ethiopia.

Armenia’s lahmacun drive is also triggering counterattacks. Fatma Sahin, the mayor of Gaziantep, told Al-Monitor that the city, famous for its rich cuisine, had already won a spot on UNESCO’s Creative Cities Network in the field of gastronomy, and would lay claim to lahmacun as well.

Ironically, lahmacun is contested not only internationally but also between several regions in southern Turkey. Gaziantep, Adana and Sanliurfa have been locked in a long-standing rivalry over ownership of the dish. These days, Gaziantep, which borders Syria and has been the scene of Islamic State attacks, seems to be ahead in promotion efforts. Struggling to shake off its newly acquired image as a violence-plagued region and in an effort to revive tourism, the city is promoting lahmacun as “Turkish pizza.”

“To our foreign guests, we promote this delicacy as Turkish pizza. They like it very much, as it is both healthy and filling,” Sahin said. “This taste is utterly special to the Gaziantep cuisine, and what makes it different is the spices of the region. The lahmacun is otherwise consumed across Turkey, but ours is the most delicious one. You can’t have the same Gaziantep lahmacun anywhere else. I hope we’ll have it patented in the shortest possible time.”

Turkey’s culinary tensions are not with Armenia only. With Greek Cypriots, for instance, tensions have surrounded halloumi cheese, a hallmark of the Mediterranean island of Cyprus, which has been divided between its Greek and Turkish communities for over four decades. In 2014, the Greek Cypriots applied to the European Commission to secure protected designation of origin status for halloumi, or “hellim" in Turkish, drawing angry reactions both from Turkish Cypriots and Turkey. A year later, the issue arose on the agenda of peace negotiations between the two Cypriot sides, and the EU hailed a “common understanding” reached on the issue as a sign of the parties’ willingness to “build confidence.” Similar disputes have taken place over baklava, raki and olives between Turkey and Greece.

One easily notices that the food spats always involve nations with which Turkey has historical tensions. Haberturk’s diplomacy correspondent, Bahar Bakir — who reported about the lahmacun unease — stressed the commercial aspect of the disputes.

“The problem of food registrations has become a new crisis domain between nations. Countries that have political disputes are competing in other realms as well. … Serious trademark wars are underway around the world,” Bakir told Al-Monitor.

In Turkey’s neighborhood, she noted, the competition is especially heated as nations have a lot in common in their heritage. “The [contentious] products are actually regional products, meaning that the dishes belong to everyone. Yet, they are being registered by whichever nation takes action first,” Bakir said. “Turkey has a lot of registered trademarks, but some countries are leaving Turkey behind. And in a region where tensions are already running high, this leads to new crises — even if soft ones.”

For Turkey, the culinary spats come atop heavy historical baggage, including wars and population exchanges with Greece and a genocide row with Armenia. Though trademark wars have emerged as a new realm of rivalry in modern times, one should note that the disputed dishes often serve as a vessel for cultural connection as well. Trademarks may be important, but in a region so closely intertwined in cultural terms, drawing lines between cuisines and other traditions is not easy after all.

“Once, we took part in a Turkish Week event in Greece and put stuffed vine-leaves, baklava and mastic pudding as Turkish dishes on the menu. The Greeks said those were not Turkish but Greek dishes. And they were really the same dishes with the same names, but their ingredients and the way they were served were different,” Hayran told Al-Monitor.

The chef’s trip had other surprises as well. “As we took a walk in the streets, I heard the sound of bagpipes. I was so surprised that we shared not only dishes but also music,” he said. “Then, I sat down at a cafe and a Greek man invited me to his table. When I told him I was Turkish he started talking about Istanbul, and it turned out we had even common acquaintances.”

Hayran is fine with the shared heritage but believes Turkey should do more to promote its cuisine. “In a region with so many things in common, the common dishes are only natural,” he said. “The problem here is that Turkey lags a bit behind in promotion. We should be more aggressive in promoting our dishes, cheeses and other delicacies.”