Militants from Syria's Qudsaya prepare to leave for Idlib

The Syrian regime has recently pounded the city of Qudsaya, northwest of Damascus, in a bid to reach another one of its settlements that includes the evacuation of militants from the cities. 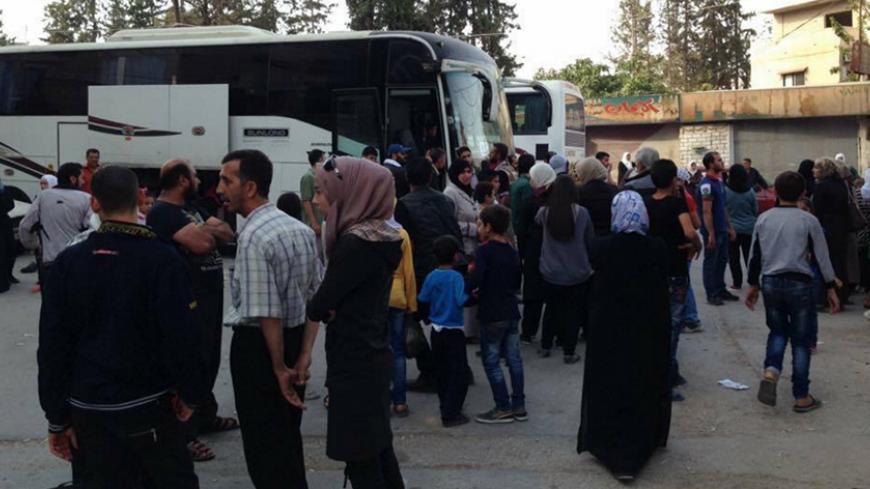 Residents of Qudsaya wait to board buses that will transport them to Idlib, Qudsaya, Syria, Oct. 13, 2016. - Twitter/‏@SiegeWatch
Mustafa al-Haj
October 14, 2016

DAMASCUS, Syria — A new region has been added to the Syrian regime’s plan to ensure the safety of Damascus’ surroundings through slow advancement operations in the areas controlled by the opposition forces. This operation coincides with the regime’s blockade on these areas, which would ultimately lead to a settlement and forced displacement of the citizens, just like what happened in Daraya on Aug. 27.

The same scenario is recurring in Qudsaya, in the northwest of Rif Dimashq, which has seen military escalation since Sept. 21. The opposition militants agreed to the regime’s settlement that allowed them to head north with their families to Idlib on Oct. 13.

Qudsaya is located 5 kilometers (3 miles) northwest of Damascus and has a population of around 150,000 people. It is located in a mountainous area that overlooks surrounding regions such as Dummar where large numbers of regime forces are present. It is close to strategic areas for the Syrian regime, such as Masaken al-Haras and Jabal al-Woroud that are inhabited by Alawites who work with the regime, whether in the army ranks or in the security apparatus. Also, Qudsaya is 2 kilometers from the presidential palace.

The Syrian regime besieged the entire city in June 2015, and food and medical supplies have not been allowed in since then. According to university student Marwan who lives in Qudsaya, the main services have been cut off. He told Al-Monitor, “Warehouses and stores are almost empty, and the power conditions are horrible. People cannot leave or enter [the city] unless they have an employment permit or a university student card. The permits to enter and exit the city are restricted to official working hours [8 a.m. to 4 p.m.]."

In October 2015, the militants in Qudsaya reached a reconciliation agreement with the Syrian regime through mediators from the Ministry of National Reconciliation, after which the shelling stopped. Roughly 150 opposition militants headed north toward Idlib, which is under the opposition forces’ control.

But the calm that engulfed the city was broken Sept. 21 after a shooting between the opposition factions and regime forces near al-Afrah checkpoint and al-Nazihin area. As a result, a member of the Syrian regime forces was injured, according to the Syrian Observatory for Human Rights, and the clashes continued until Oct. 3. Six Syrian regime forces were killed, and the armed factions detained a wounded soldier who was later handed over to the regime through a mediator.

According to Muhannad al-Shami, a field activist in Qudsaya, the clashes broke out following the regime’s attempt to control the tall buildings surrounding the city. The regime forces focused in September on al-Uyun, al-Shamiyah and al-Khayatin neighborhoods that overlook 80% of the total surface area of the adjacent cities of Qudsaya and al-Hamah under the opposition’s control. This would allow the regime to turn the tables when separating the two cities of Qudsaya and al-Hamah and cutting the support lines between the fighters present in both cities. Shami told Al-Monitor, “This prospect provoked the opposition militants and flared up the situation in the city once again.”

During the past two weeks of the attack, the regime used tanks and heavy machine guns in addition to ground-to-ground missiles (Elephant Missiles) and air cover. Helicopters dumped roughly 50 explosive barrels. Public facilities were also destroyed, and schools and hospitals were shut down after Sham al-Amal Hospital in Qudsaya was targeted with a cannonball and the civil security office in al-Hamah with an explosive barrel. As a result, the two facilities went completely out of service.

The Syrian regime’s media outlets exploited the protest to their advantage. The official Syrian news agency Sana wrote Sept. 30, “Hundreds of citizens took to the streets after the Friday prayers in Qudsaya to condemn the practices of armed groups and to demand their immediate departure from the city.”

Amid the shelling, the Syrian regime proposed a solution Sept. 29 through the presidential guard command and the Damascus mufti, Adnan Afiouni, to stop the shelling, resume the provision of services and expel the militants who refuse to be settled in the north. Such a scenario resembles the Daraya settlement of Aug. 27.

The solution also entails erecting checkpoints for public committees formed by the regions’ inhabitants in Qudsaya and al-Hamah. The mission of the committees is to ensure the area’s security and give a grace period of six months to the men who are wanted for conscription to submit their applications for postponement of their enlistment, provided that all documents — such as exemption requests for academic or travel purposes — are submitted to the Military Enlistment Division. Those who do not submit the documents within this time frame officially join the Syrian army. A period of one week was granted to approve the settlement or launch an intense military attack to invade the city.

The local affairs’ committees that are formed of well-reputed citizens who have connections with the fighters and the regime also sought to appease the situation in the city in response to public pressure in Qudsaya and al-Hamah. The people asked the opposition factions to agree to the settlement, out of fear of the regime’s threats to invade the city with its military vehicles.

The opposition Local Council of Qudsaya City posted on its Facebook page Oct. 2 that the groups that want to leave the city have agreed to the settlement on condition of completing the registration of the names of the army dissidents and the families of militants at the local affairs’ committee. Not everyone wanting to leave managed to register their names due to the short one-week notice that the regime imposed, beyond which it threatened to resort to the military solution. The council said in its post that the people want guaranteed protection by the United Nations for those willing to leave with their personal weapons.

On Oct. 12, Al-Monitor met with opposition activist Abdel Rahman Fattouh who registered his name with the reconciliation committee to leave the city. He said, “The city has been witnessing precarious calm since Oct. 3 after the opposition militants agreed to the settlement proposed by the regime.”

When asked about what he expects to find when he heads north to Idlib in the coming days, he answered, “The unknown.”

He added, “I am not one of those who carries weapons. I would not have left if my name wasn’t blacklisted. The security authorities are pursuing me and I might be arrested if I stay.”

The first phase of the evacuation of the militants in Qudsaya and al-Hamah in Damascus’ suburbs started Oct. 3. Buses arrived at noon, and militants and their families left for Idlib carrying their personal light weapons. The evacuation was carried out under the supervision of the Red Cross and the Red Crescent, without the monitoring of any UN agency. A source in the negotiations committee told Al-Monitor on condition of anonymity that 525 militants along with their families are expected to leave Qudsaya and 114 others with their families from al-Hamah, bringing the total to about 2,500 people.