Palestinians get glimpse of world’s largest mosaic in Jericho

A Japanese-funded project to protect and exhibit the largest mosaic floor in the Middle East, an ancient creation dating back to the Umayyad period, promises to protect this treasure of Palestinian heritage and attract thousands more visitors to Jericho. 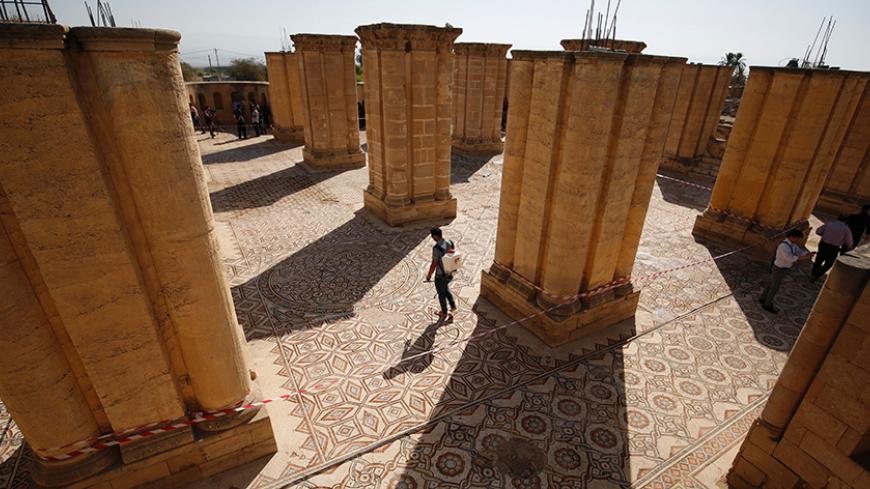 RAMALLAH, West Bank — In Jericho, one of the oldest cities in the world, the Palestinian Ministry of Tourism and Antiquities has unveiled the largest floor mosaic in the Middle East for public display. The Oct. 20 ceremonial opening in Hisham Palace was attended by numerous official figures and public personalities, including Tourism Minister Rula Maaya, Secretary of the Palestine Liberation Organization’s Executive Committee Saeb Erekat, Japanese Ambassador to the Palestinian Authority Takechi Okubo and chief representative from the Japan International Cooperation Agency Yuko Mitsui.

The mosaic, dating back to the Umayyad era, covers the floor of the reception hall between the office of the caliph, which was used to host high-level visitors, and the large bathroom in the Umayyad Hisham Palace, built in 724.

The mosaic is made up of 38 connected panels, each with a unique design that includes decorations and geometric forms. Altogether, these panels form a large mosaic floor spanning a total area of 827 square meters. The most famous image, the “Tree of Life,” shows a lion preying on a deer on one side of the tree, with two other deer foraging peacefully on the other. The room containing this section was blocked off, with the mosaic viewable through doors and windows that are blocked with iron bars.

The director of the Palestinian Tourism and Antiquities Ministry, Iyad Hamdan, told Al-Monitor, “This archaeological piece is an expression of life in times of war and peace.”

Hamdan said that the mosaic floor, which had been buried under sand to protect it from erosion, was unveiled in the presence of officials as part of a project to protect the mosaic before displaying it to the public. This project was funded by Japan through the Japan International Cooperation Agency at a cost of about $12 million and is due to start in three months. This process of constructing protective and exhibition facilities is expected to take up to a year and a half before the mosaic is displayed to the public in early 2018.

Hamdan explained that a protective barrier made of insulating and environmentally friendly materials capable of withstanding temperature fluctuations will be constructed without changing the site, to prevent visitors from stepping on the mosaic floor and to provide a view from above.

On the sidelines of the unveiling ceremony, Maaya, the tourism minister, said that this mosaic floor is the largest in the Middle East and perhaps in the world. “This mosaic portrays the history of the Palestinian people and has great historical value,” she said.

Mitsui said, “A Japanese engineering team, in collaboration with the Palestinian Ministry of Tourism, the technical team and the consulting committee, are discussing the best design for the mosaic floor’s protective cover, which must be suitable to the nature and environment of the [palace] and must preserve its historical value.”

Saleh Tawafsha, the general director of the Ministry of Tourism's Department of Antiquities Protection, told Al-Monitor, “The Japanese team, in cooperation with the Palestinian team, will execute the project to construct protective and exhibition facilities consisting of high bridges between columns that the visitors will cross to view the mosaic floor without stepping on it.” He added that a specialized Palestinian team will conduct the necessary restoration works.

He noted, “The mosaic floor will not be displayed for public viewing until the completion of the project, because some of it needs restoration and maintenance and uncovering those parts to visitors will expose them to significant harm.”

The massive mosaic was discovered in 1935 by Palestinian archaeologist Dimitri Baramki, who headed a British excavation team in his capacity as director of the Palestinian Department of Antiquities under the British mandate. The team explored Hisham Palace, which covers an area of about 40 dunums and was destroyed by an earthquake in the year 749, according to Jihad Yassin, the general director of museums and excavations in the Ministry of Tourism and Antiquities.

Yassin recalled that in 2006, the Ministry of Tourism carried out some excavation works to examine the civilizational history of the palace. Between 2010 and 2015, the ministry and the University of Chicago conducted a joint excavation project that led to the discovery of the palace’s northern gate and allowed them to learn more about the nature of the northern area.

Tawafsha said that the PA's Ministry of Tourism had on several occasions carried out restoration work on the mosaic, covered and buried it in sand for protection. However, the PA has been unable to build protective facilities to display the mosaic to the public, as such a project would be very costly. The PA proposed a project that failed to gain approval because the designs suggested were not compatible with the mosaic floor's cultural landscape.

Yassin explained, “Mosaics in Palestine date back to the Roman period. This art has evolved over the centuries, especially in the Byzantine era and the Islamic era. Aesthetics have changed and work on mosaics has become more professional. It is widely used in public buildings, churches and monasteries. The mosaic flooring in Hisham Palace is a unique piece of art and the largest mosaic floor in the Middle East, with harmonious colors and meticulous assemblage.”

The Ministry of Tourism hopes the unveiling of the mosaic floor will increase tourism to the city of Jericho. Hamdan said, “Most visitors who come to Jericho asking about the mosaic floor do not believe that this treasure, featured in tourism publications, is buried under sand, which forces some tour guides to uncover some part of this mosaic for them to believe.”

He added, “After the completion of the protection project, we expect the number of visitors to Jericho and specifically to Hisham Palace to double compared with about 1.248 million visitors last year.”

The protection, maintenance and eventual unveiling of the mosaic floor will add to the aesthetic value of the Umayyad Hisham Palace and solidify its status as the most important archaeological site in the city of Jericho.