A recent study found that despite the significant role foreign aid plays in the Palestinian economy, the private sector is not receiving the support it deserves. 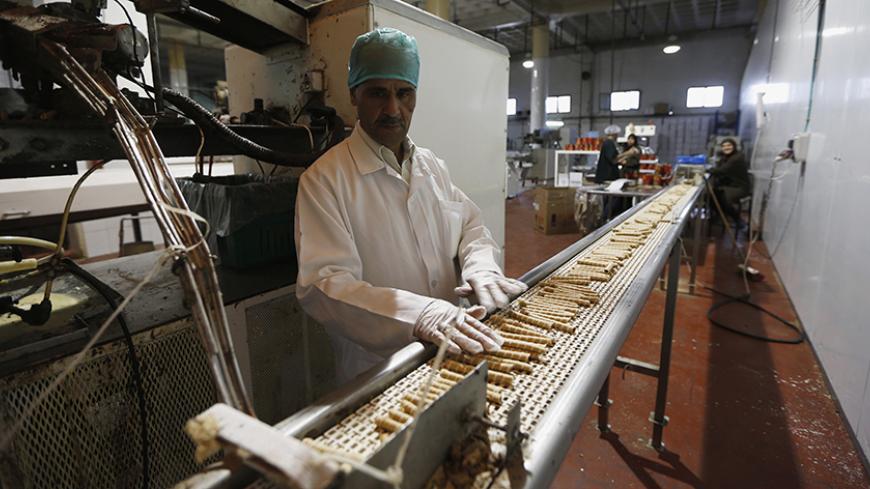 A worker stands near a conveyor belt at a chocolate and baked goods factory in Ramallah, West Bank, Oct. 27, 2013. - REUTERS/Mohamad Torokman

RAMALLAH, West Bank — At an Oct. 16 seminar held in Ramallah to discuss the role of foreign support in promoting the private sector, a group of economists concluded that the importance of the private sector in Palestine’s economic growth did not translate into the necessary level of attention or size of funding allocated to that end.

Foreign support consists of the donations and aid offered by foreign countries to the Palestinian Authority (PA) as per the Oslo Accord signed in October 1993 and which were set at $2.4 billion. This amount, which would be paid in installments over the years, aims at funding the building of the PA’s institutions and development works.

The seminar, organized by the Palestine Economic Policy Research Institute - MAS, came in the context of a study, which is currently being revised before publication, conducted by MAS on foreign support to the Gaza Strip. The seminar, which was attended by economic experts and representatives of the private sector, aims to measure the effect of foreign support on the private sector, which is one of the pillars and engines of the Palestinian economy.

In this regard, director of the study Samir Abdallah told Al-Monitor, “The private sector was allocated a slight share of foreign support; in other words, less than 5.2% of the total amount estimated at $230 million throughout the period between 2002 and 2014.”

According to Abdallah, this was a marginal rate given that the private sector generates 63% of the gross domestic product and employs 62% of the workforce in the Palestinian local market.

Aliqtisadi website editor Mohammad Fareed attributes the low figure of 5.2% to the limited number of organizations offering support to the private sector, compared to those supporting civil society and nongovernmental organizations (more than 60%, according to experts). “The donations allocated to the private sector are deducted from the total amount in donations the PA receives. The private sector uses these donations to procure the machines and equipment necessary for boosting production and expanding the market share, instead of achieving quality to the benefit of the citizens. This contradicts the purpose of foreign support, which is originally deducted from the taxes paid by the citizens of donor countries,” Fareed told Al-Monitor.

Although the study’s analysis was based on the fact that the private sector's share of 5.2% is real, Abdallah noted that this figure may not be accurate. “While conducting the study, we had to deal with imprecise data and the firms’ lack of transparency in that respect. Also, firms benefit indirectly from an additional rate of foreign support offered to the government and civil society organizations, since these firms are the ones that implement the projects [of NGOs and civil society institutions] funded through said support,” he said.

In turn, Fareed explained the inaccuracy of these figures saying that financial support is usually transferred directly by the donors to the private sector, which means that it does not figure in the state budget, but rather that of the recipient firm or the donor country. Furthermore, private firms prefer not to disclose this support in order to obtain additional donations from various stakeholders.

The limited support was not the only problem addressed by the study that also tackled distribution to the different components of the private sector, which mainly targeted those who do not need it.

According to Abdallah, the majority of support goes to small- and medium-sized enterprises. As a result, the study recommended the redistribution of this support in a way that focuses on microenterprises.

Economic expert Misyaf Misyaf stressed the study recommendations, telling Al-Monitor, “In fact, large firms don’t need support. It is microenterprises that really need it, since they are marginalized by both the government and the private sector.”

Misyaf further criticized the form of the support, despite its scarcity, saying, “This support is not without conditions and does not take into consideration the Palestinian economy’s needs. It chiefly targets large enterprises that don’t need support to begin with.”

For this support to be more effective, Misyaf called for the establishment of a joint central administration composed of representatives of the private sector, the government and civil society. Such administration would be tasked with elaborating a national strategy for the private sector’s needs. As part of this strategy, support would be allocated based on priorities. Misyaf further stressed the importance of regional redistribution and focusing on marginalized areas located far from the centers of major cities.

Despite the need for increasing this support, as recommended by the study, it should be noted that the Palestinian private sector remains a fledgling sector, founded with the advent of the PA in 1995. It is still unable to compete with its Israeli counterpart, which will benefit the most from foreign support should it increase, as all crude materials needed for foreign-funded projects in Palestine are imported from the Israeli private sector.