Cultural initiatives in Gaza are short on cash

The Palestinian Cultural Palace, a cultural center created by a youth group in the Gaza Strip and aimed to preserve the cultural heritage of the Palestinian people, may not be able to flourish in light of the lack of government financial support. 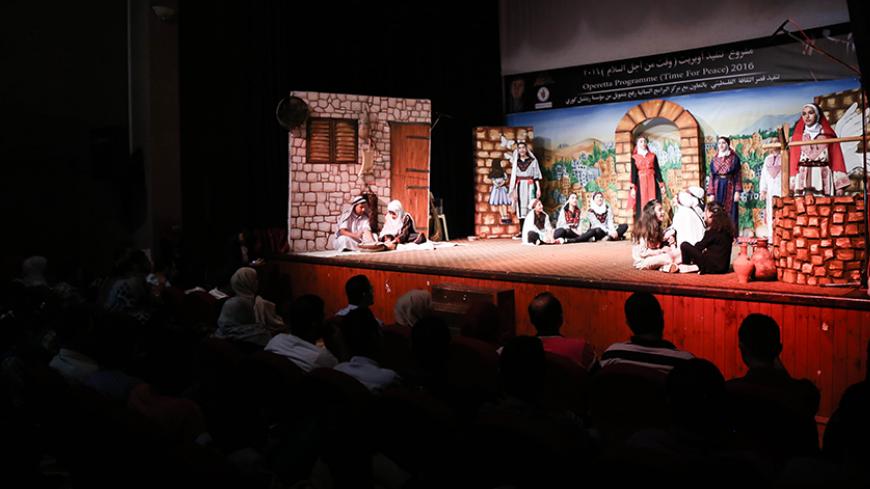 GAZA CITY, Gaza Strip — The Palestinian Cultural Palace, a cultural center created by a youth group in the Gaza Strip, organized its first artistic and cultural activity funded by the Rachel Corrie Foundation and in cooperation with the local Women’s Programs Center on Aug. 22 in Al-Mishal Theater in Gaza City.

The center’s first artistic group, made up of children ages 12-16, organized a national folkloric play titled “Operetta: Time for Peace," which targets all social categories of all ages.

The Palestinian Cultural Palace has limited finances in light of the lack of government and international financing. This pushed its young founders to rent Al-Mishal Theater for $1,000 every four months to perform their cultural and artistic activities. It should be noted that the activities and training sessions offered by the center have brought in around $3,000 since the opening on Aug. 22.

He said, “The cultural center seeks to foster and promote numerous cultural activities and reproduce them in the best civilized cultural manifestations. This includes theater, drama, tragedy, national folklore, the Dabke dance, the zajal poetry, music and singing, as well as modern sports such as parkour and street sports, visual and expressionist arts and writing. All these activities will be offered free of charge if the proper and sufficient financial support is provided, otherwise a minimal charge will be imposed.”

Poet, writer and observer of cultural affairs in Gaza Rizk al-Bayyari told Al-Monitor, “Despite the absence of required funding for the Palestinian Cultural Palace to allow its founders to secure all of their requirements, including a fixed headquarters, the achievements of those in charge of this cultural center … reflect their high artistic potential and creativity.”

He pointed out that their positive energies will guide them toward success and will help them get the required financial support.

Bayyari added, “However, for this success to be achieved, it must be backed by governmental logistical and financial support. The government in the Gaza Strip, especially the Ministry of Culture responsible for such activities, is not providing the sufficient financial support, which nipped in the bud numerous ideas of similar centers. This is the reason behind the limited number of such initiatives in the Gaza Strip and the scarcity of their artistic and cultural activities.”

Bayyari asserted that if the idea of the Palestinian Cultural Palace thrives and if all of its artistic, literary and cultural plans are implemented, it will become a leading institution in the Gaza Strip given the comprehensiveness of its activities and the creativity of its officials.

Sami Abu Watfa, the general director of the civil works department at the Gaza Ministry of Culture, told Al-Monitor that his ministry has always sought to overcome the obstacles hindering any cultural activity by any cultural center or independent youth group.

He added that the ministry is supporting, in various ways, everything that serves the Palestinian cultural scene and Palestinian society, explaining that this support may be moral or logistic such as providing venues for events.

He said, “Recently, the ministry’s financial support was affected by the financial crunch faced by all of the ministries of the Gaza Strip. However, given our desire to serve the cultural scene and support creative youth teams, we have alleviated the licensing conditions imposed on cultural institutions and allowed youth teams to work as long as their activities serve the cultural scene. Since 2012, 35 cultural centers have been licensed in Gaza.”

Abu Watfa stressed that the new youth cultural centers that were recently licensed aim to promote culture in the Gaza Strip, noting that these centers are managed by aspiring young innovators in the artistic and cultural fields.

The Palestinian Cultural Palace is a manifestation of modernity and is part of the Palestinian cultural landscape in the Gaza Strip. Yet this center may be forced to close its doors in light of a lack of proper financial support that would guarantee its survival and the development of its services.