A restaurant in Gaza is hosting a cultural center that allows young Palestinians to express their talent and use it to further the Palestinian cause. 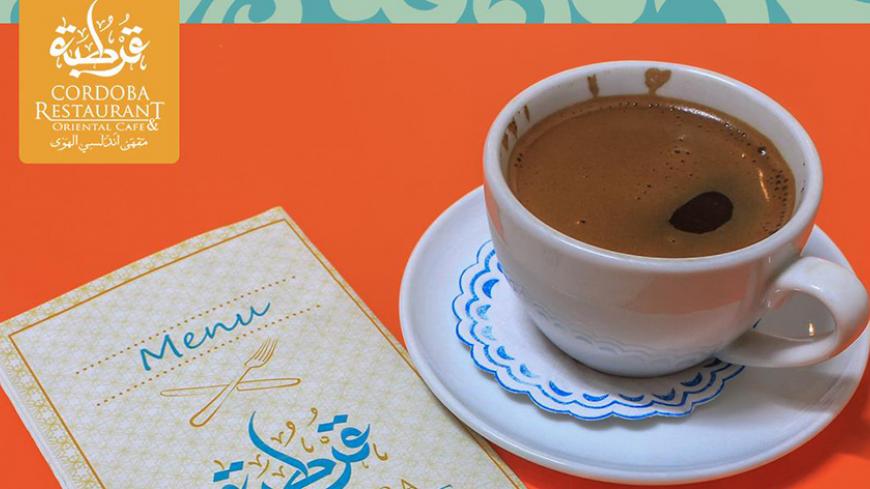 GAZA CITY, Gaza Strip — The Cordoba Students' Center started a recent meeting with the sounds of musical instruments and Arabic melodies. The attendees gathered in the Cordoba Restaurant, in southern Gaza City, where the meetings are held on the first Tuesday of each month in a private room. Arab originality and Palestinian heritage are showcased in the room's books, photos and other decorations.

The center has allowed young Gazan students to rebel peacefully together against their bitter reality of life under the stifling blockade on their city and against the backdrop of the Palestinian division. The group hosted its first art, culture and music festival Dec. 5 to proclaim to the world that Gaza has another side that eagerly embraces life.

The center opened July 1. Its founder, Yousri al-Ghoul, told Al-Monitor, “The owner of Cordoba Restaurant came to me with the idea of organizing a cultural activity at his restaurant. He believes it is very important to have a place that hosts youth cultural and artistic events, in light of the official institutions’ poor attention and capacities in this respect, due the Israeli blockade on Gaza and the Palestinian division.”

Ghoul added, “Following his proposal I decided with a group of young people to form a group that represents all spectra of the Palestinian people, to advance the cultural, literary and artistic situation in Gaza.”

He said its name refers to a civilization, a history and a heritage, and represents the group’s ambitions to renew this culture and create a community.

The Cordoba Students' Center consists of 20 young and educated members, including seven women, between the ages of 20 and 35. There are also 10 guests who are invited or who request to attend a monthly meeting relevant to their talents and interests.

“Gaza is full of educated and creative young people and we cannot limit the meetings to 20 members," Ghoul said. "This is why we invite new people every time, to allow them to express their talents and innovation and encourage them to form their own youth groups similar to the Cordoba Students' Center.”

“The Cordoba Students' Center aims to revive and promote Palestinian art, literature and heritage to confront Israel in a peaceful manner by investing in music and literature. It seeks to convey a message to the world that young Palestinians do not seek [martyrdom and death], but that they love life,” Ghoul said.

“The center aspires to make a quantum leap in the Palestinian culture and literature scene by establishing a major cultural institution that publishes books, adopts young talents and helps the Palestinian cause."

Ghoul explained that the group decided to increase its membership and to go from private to public. He said it started opening up to have an impact on its surroundings by organizing a cultural and art event that reflects a reality different from the prevailing political and partisan stereotypes.

The event was called Prova (Arabic for "rehearsal") and was held in November in the Red Crescent Center in Gaza, after the group obtained the approval of the Culture and Interior Ministries.

“After Prova, we are preparing for more events to hold in the future,” Ghoul added.

The Prova event featured performances of Palestinian traditional folk dance (dabke), rap performances and a stand-up comedy show satirizing life in Gaza, in addition to live instrumental performances and poetry readings. The event lasted two and a half hours.

Ghoul said turnout was high, with about 250 people showing up despite the small location and limited invitations, showing the public’s thirst for culture. He noted that the center is planning more events, on a larger scale in terms of equipment, invitations and locations.

The center refuses to rely on support from private institutions that might try to impose their political or ideological agenda on the group, which wants to keep its cultural orientations, opinions, ideologies and activities free from outside influence. At the same time, Ghoul said, public institutions have not stepped up to support young talent.

“We cannot fill the gap created by the official institutions’ neglect of culture and talent. We are trying to invest in young talent away from the political arena."

The center relies on self-funding or event sponsors. Prova, for example, was sponsored by independent news channel al-Ghad al-Arabi and Ain Media. The center organized Prova to promote otherwise obscure and talented young people in the community and allow them to find sponsors.

The center helped Nabil Diab, a satirical comedian who critiques social values and behaviors, in this manner. The name of his troupe is Fou Rire, which means "giggle" in French. It consists of four members, including his wife.

Diab told Al-Monitor that Gaza is full of talented people who have yet to be discovered. Many government and private institutions fail to encourage young talent, he said. Diab tries to promote his talent by choosing locations for his show that can accommodate a wide audience, to prove himself and his ability to make the audience laugh, stressing that like other arts, his performances also carry a meaningful message.

Sami Abu Watfa, general director of the civil works department at the Gaza Ministry of Culture, told Al-Monitor the ministry focuses on young people, who make up more than half of society, by holding literary competitions in poetry, prose and storytelling, organizing photo and painting exhibitions and cultural evenings and networking with institutions.

Abu Watfa explained that the ministry recently announced the results of the “Gaza’s poet” contest — which was planned for 2014 but postponed due to the 2014 Gaza war — and printed a collection of poems by the four winners. He said the ministry is also organizing the Jerusalem Poetry Award contest in Gaza in support of the current uprising in Jerusalem.

Abu Watfa confirmed that Israeli restrictions imposed on the Gaza Strip have hindered the work of cultural centers there. Financing has declined significantly. He stressed that the ministry offers help as it is able and according to financiers’ policies.

According to Abu Watfa, the Cordoba Students' Center gained fame thanks to its members and their contacts with political figures and other prominent people in society.

He explained that one of the main conditions imposed by the Gaza Ministry of Culture on youth initiatives and activities is respect for Palestinian society’s norms and traditions. However, he stressed that the ministry has never canceled any cultural event.

Life, just like death, finds its way to Gaza. Young Palestinians continue to strive to achieve their dreams and to send a message to the world that they are worthy of life.