How this new Palestinian coalition intends to fight climate change

The Palestinian Coalition for Climate Justice was recently formed to address the climate change issue and raise awareness about its repercussions in Palestinian society. 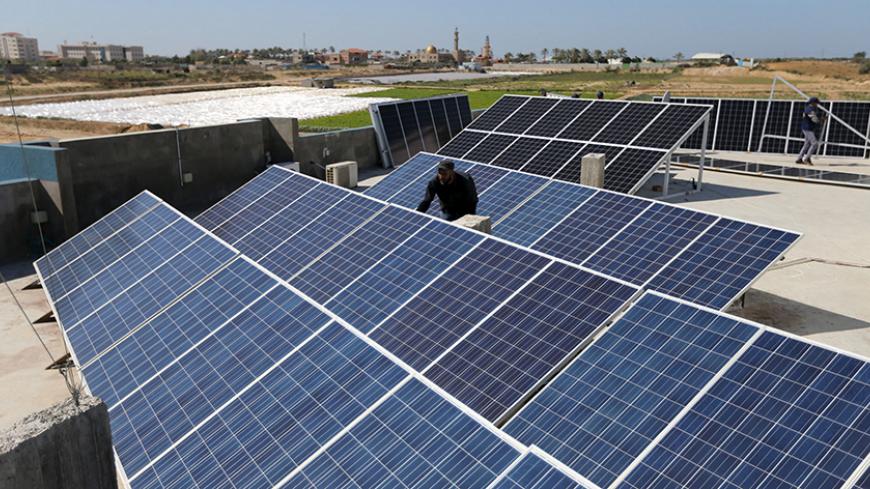 RAMALLAH, West Bank — On Sept. 27, 12 Palestinian civil associations launched the Palestinian Coalition for Climate Justice to attend to the climate issue that is a central priority for them and to take measures to curb climate change locally.

Many reasons pushed the civil associations to form this coalition. The head of operations and development at the UAWC, Fouad Abu Seif, told Al-Monitor that several of the associations participated in the Climate Summit that was held in Paris Nov. 30, 2015, but they lacked coordination and showed weakness in reflecting the Palestinians’ suffering due to climate change that has been exacerbating under Israel’s policies.

Director of the Palestinian Hydrology Group Abdel Rahman al-Tamimi told Al-Monitor that the coalition’s importance lies in “uniting Palestinian efforts to face water and environmental crises resulting from climate change. Research expects long years of drought.” According to Tamimi, this united Palestinian body can participate in global conferences dealing with climate change and coordinate efforts with official parties to play an influential role locally and regionally.

I’tiraf al-Rimawi, the director of the Bisan Center for Research and Development, talked to Al-Monitor about the coalition’s work mechanisms, saying that the coalition will focus on raising awareness among farmers about climate change, global warming and their main indicators like drought and rainfall fluctuation, and will put in place mechanisms to face them. He said that it will also focus on agricultural production and economic and agricultural development.

Rimawi said that, nationally, the coalition will keep track of the Israeli policies that are exacerbating climate change like extraction and usage of coal and the resulting dangerous gases, burying garbage in Palestinian territories — especially in Area C, which is under Israel’s control — coupled with its damaging effect on soil and depriving Palestinians of water.

He added that forming the coalition is a step that shows “Palestinian inclination to anti-capitalism global forces as they [Palestinians] believe capitalist policies lead to global warming and threaten our planet.” Within that framework, the coalition will monitor the Palestinian Authorities’ (PA) policies that have practically proven their resemblance to industrial and capitalist economic policies without taking into consideration the environmental aspects. The industrial area that was established in Jezreel Valley in Jenin is an example of these policies.

The Jenin industrial zone, which is mainly funded by Turkey, is considered the biggest Palestinian industrial city, and work there is ongoing. This project has sparked the ire of many environmental institutions.

Rimawi said that the coalition will rely on networking and communication with citizens as a plan of action through agricultural and farming committees and public and youth organizations in the provinces to highlight the effect of climate change on the Palestinians’ economic situation and livelihood. Meanwhile, Israel continues to implement its policies amid the government’s lack of interest and the absence of private sector investments.

The Palestinian Coalition for Climate Justice is trying to foster coordination with the Palestinian Environmental Quality Authority, which acts as the Ministry of Environment, to raise the bar of the Palestinian environmental action globally. Tamimi said that the government and civil associations in the Palestinian territories only recently started talking about climate change and global warming issues, which necessitate joint cooperation.

It seems that the PA is also picking up interest in climate change. President Mahmoud Abbas signed April 22 the Paris Agreement for Climate Change at the United Nations headquarters in New York. Moreover, the PA signed the UN Framework Convention on Climate Change (UNFCCC) Dec. 22, 2015.

Adalah al-Atira, the head of the Palestinian Environmental Protection Authority (PEPA), told Al-Monitor that the Palestinian territories started preparing their first national greenhouse gas inventories before joining the UNFCCC, which binds all signatory nations to submit the inventory within four years from signing. She said, “For that reason, we prepared the inventory before signing the agreement. It is now ready and will be submitted to the UNFCCC secretariat within a couple of weeks after passing through the government and president.”

Atira said that the inventory includes complete information about the level of emissions from Palestine (West Bank, the Gaza Strip and Jerusalem) resulting from gases, petroleum and agricultural activities. It also includes a national plan about how to face climate change and cope with it. The plan mentioned the 12 main sectors that are affected the most by climate change, such as the water and agricultural sectors. Parts of the plan will be implemented as soon as the right funding is available.

Abu Seif said that Palestinians must benefit from the climate agreement that was signed, and must see the change in their policies and national plans and coordinate with relevant civil organizations to allocate a budget to support the related sectors and set measures to reduce the repercussions of climate change. These measures include building water dams and expanding the activity of drilling wells to accumulate water amid Israel’s ban on drilling artesian aquifers.

Despite all awareness efforts and the preparation of theoretical plans and studies, Palestinians know that they cannot face the worsening climatic change issue single-handedly. They urgently need to develop their strategies to confront this problem and cope with it, which requires huge funding that is unavailable.