With the highest number of refugees and displaced people since World War II and continued brutal conflicts in Syria, Iraq and beyond forcing millions to flee, humanitarians lament a broken system running from crisis to crisis. 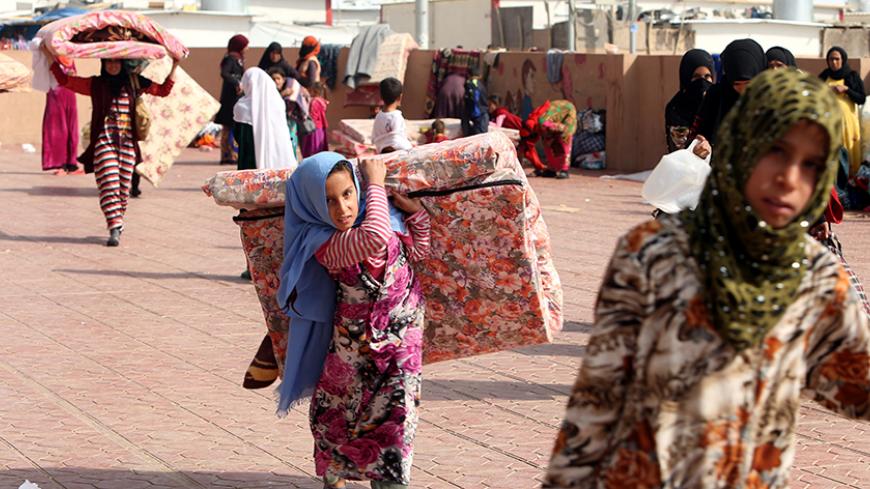 WASHINGTON — As the long-anticipated Iraqi military campaign to take Mosul from the Islamic State (IS) got underway this week, humanitarian aid groups warned of the plight of up to 1.5 million civilian inhabitants of the city, hundreds of thousands of whom may be displaced by fighting in the coming weeks. The United Nations said the scale of displacement that could be triggered by Mosul military operations, with estimates ranging from 200,000 to 1 million people, may pose one of the single biggest and most complex humanitarian challenges it has ever faced.

“Depending on the intensity and scope of the fighting, as many as 1 million people may be forced to flee their homes in a worst-case scenario,” Stephen O’Brien, the United Nations undersecretary-general for humanitarian affairs and emergency relief, said Oct. 16.

Preparations have been underway since February for the Mosul campaign, and the United Nations said it had shelters prepared to house 60,000 people, while construction of additional sites to accommodate up to 250,000 people is taking place.

But with Iraq already housing 3.3 million internally displaced people before the Mosul operation began, the UN had received only approximately 58% of its 2016 Iraq funding request of $861 million. “Despite generous new funding pledges, the US $284 million Mosul flash appeal … is only just over half funded,” the UN’s Office for the Coordinator of Humanitarian Affairs (OCHA) said. “As a result, key components of the response, including emergency camps, are critically underfunded.”

The daunting humanitarian burden anticipated for Mosul has further stressed already overwhelmed and insufficient resources to care for the over 3 million internally displaced people (IDPs) in Iraq — most of them who fled IS or earlier battles by the Iraqi government to retake towns from IS since 2014, said Daryl Grisgraber, a senior advocate for the Middle East and North Africa at Refugees International.

“This justified need to prepare and plan for Mosul is really taking some attention and resources away from the 3.3 million IPDs in the rest of the country,” Grisgraber told Al-Monitor in an interview Oct. 19.

Grisgraber, who traveled in Iraq between Sept. 15 and October 4 to investigate conditions for Iraq’s displaced, said she was struck by how little conditions had improved for them since a previous fact-finding trip a year before.

“Things are still very bad for IDPs countrywide, particularly in Iraq’s central provinces,” such as Baghdad, and Anbar province, she said.

“Even as [IS] is pushed out of these areas, they remain in certain pockets, … so [displaced people] can’t go back [to their homes] and it’s very insecure,” Grisgraber said. Meanwhile, the UN and foreign nongovernmental organizations largely can’t work where the IDPs are because security conditions are too risky and it’s too dangerous for staff, she said. “There is a real lack of humanitarian presence where the most vulnerable people are.”

Syria: the largest source of refugees in the world

Even as the situation for Iraq’s displaced remains bleak, the refugee crisis fueled by neighboring Syria’s more than 5-year-old civil war is truly overwhelming, almost apocalyptic in scale. With 4.9 million Syrian refugees and 6.6 million internally displaced since the conflict began in 2011, Syria has produced the largest number of refugees currently in the world — at 65 million refugees and displaced.

“We are now witnessing the highest levels of displacement on record,” the UN refugee agency writes. “An unprecedented 65.3 million people around the world have been forced from home. Among them are nearly 21.3 million refugees, over half of whom are under the age of 18.”

A UNHCR report, Global Trends, released in June, found a total of 65.3 million people were refugees or displaced at the end of 2015. “It is the first time in the organization’s history that the threshold of 60 million has been crossed.”

“Since 2011, when UNHCR announced a new record of 42.5 million forcibly displaced people globally, these numbers have risen sharply each year, … to 59.5 million in 2014,” the UNHCR Global Trends study reported in June. “This is an increase of more than 50% in five years.”

“The study found that three countries produce half the world’s refugees. Syria at 4.9 million, Afghanistan at 2.7 million and Somalia at 1.1 million,” UNHCR wrote. In addition, it said, Colombia, Syria and Iraq had the largest numbers of internally displaced people.

A "broken" system running "from crisis to crisis"

Bill O’Keefe, the vice president of government relations and advocacy at Catholic Relief Services (CRS), said the refugee problem is overwhelming and the system to deal with it is broken, treating refugees like a short-term problem rather than a protracted condition under which most refugees will be so for almost 20 years.

“The problems are overwhelming, and the system is broken to the extent that all anyone can do is run from crisis to crisis and respond,” O’Keefe told Al-Monitor in an interview. “We are clearly at an inflection point at refugee and displaced people, and the need for system reform is critical and the political will to drive that system of reform is not there.”

The world is experiencing the largest refugee flows in history due to the failure to prevent the wars that are driving people from their homes.

“All the failure to invest in social cohesion, community peace building, governance, all those preventative measures,” O’Keefe said. “And in the analogy of a patient, the world is a patient that has had no preventive care. We have cancer. There are no political solutions, no investment in prevention.”

Most critically, O’Keefe said, governments and UN agencies have not adapted to the reality that the conflicts driving out most of the world’s refugees last for decades.

“The system has not recognized or adapted to the reality that your average refugee is a refugee for 19 years,” O’Keefe said. “It is a long-term problem. But we still have a short-term response.”

“So people flee, and can’t go back, [because the] conflict is still there, and they can’t, and there are not enough resettlement opportunities in third countries. So they are stuck,” he said. “But the programming that governments provide still treat it like it is a year-by-year problem. We need to help, own up to that families are going to be there for 20 years. Help them live a normal life where they are. They need education.”

Helping refugees lead a normal life where they are

O’Keefe praised US President Barack Obama’s hosting of the Leaders’ Summit on Refugees at the United Nations on Sept. 20 that aimed to get pledges to support getting an additional 1 million refugee children in school.

CRS is providing schooling and psychosocial support for 65,000 Syrian and Iraqi refugee children in Lebanon, Jordan, Turkey and Egypt, he said.

The UN children’s agency UNICEF says there are more than 2.5 million Syrian children now registered as refugees outside of Syria, primarily in the neighboring host countries of Lebanon, Turkey, Jordan, Iraq and Egypt — 600,000 of whom are not in school. In addition, Syria is home to 2.1 million school-age children (ages 5-17) who are not in school.

In 2016, UNICEF requested $847 million in funds to support programs to get Syrian refugee children access to education and psychosocial support in Lebanon, Turkey, Jordan, Egypt and Iraq. In Turkey, UNICEF aimed to get 400,000 children access to formal education through direct support and systems strengthening, as well as 80,000 children provided with child protection or psychosocial support services.

In Lebanon, where Syrian refugee children account for 40% of the entire school population, UNICEF aimed to support 233,000 Syrian children enrolled in school, and psychosocial support to 185,000 children in 2016.

In May, UNICEF and other UN agencies launched the “Education Cannot Wait” initiative, to try to bridge the gap between humanitarian interventions during crises and long-term development afterward, through predictable funding. The aim is to raise nearly $4 billion to reach 13.6 million children in need of education in emergencies within 5 years, UNICEF said.

“We know education can quite literally be life-saving in crises — keeping children safe from abuses like trafficking and recruitment into armed groups — as well as providing children the opportunity to shape their futures,” UNICEF spokeswoman Aimee Gonzales told Al-Monitor by email. “Multiple surveys have shown that children and youth living in emergencies say that going to school is one of their most important priorities.”

Obama, while addressing the Leaders’ Summit on Refugees, lamented the largest refugee crisis in the world since World War II. And he acknowledged a collective international failure to end conflicts such as Syria’s that are driving such epic displacement, even as his own decision not to intervene to halt the violence there remains perhaps his most-debated foreign policy decision as his presidency nears its end.

“We are facing a crisis of epic proportions,” Obama told the leaders. “I called this summit because this crisis is one of the most urgent tests of our time — our capacity for collective action. To test, first and foremost, our ability to end conflicts, because so many of the world’s refugees come from just three countries ravaged by war — Syria, Afghanistan and Somalia.”

Obama continued, “The mentality that allows for violence with impunity is something we cannot excuse. And collectively, we continue to make excuses. … We all know that what is happening in Syria … is unacceptable. And we are not as unified as we should be in pushing to make it stop.”