Health crisis in the making as doctors flee Iraq

As a brain drain in the health sector and the war against IS continue, Iraq is facing a health crisis. 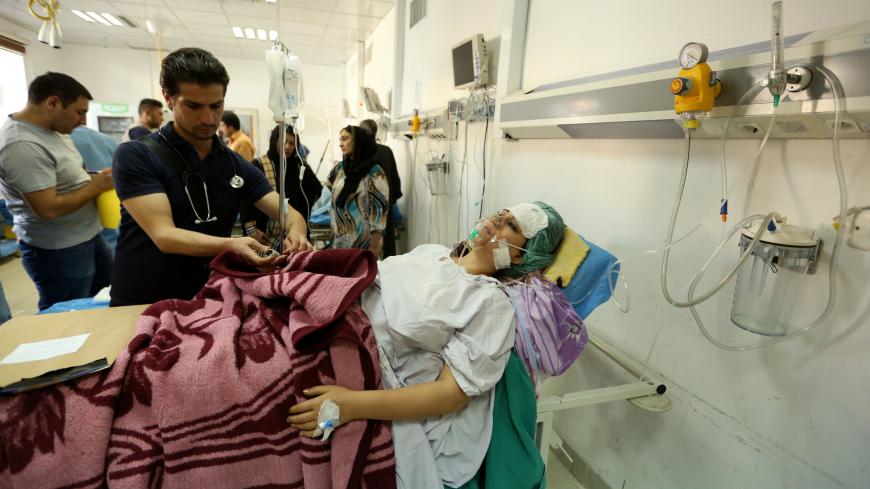 A woman who was wounded in a bombing at a Kurdish wedding in the northeastern Syrian city of Hasakah lies in a hospital in Dahuk province, Iraq, Oct. 4, 2016. - REUTERS/Ari Jalal

On Oct. 10, the Iraqi president approved a law passed by the parliament to provide comprehensive support to doctors in order to prevent the massive emigration in this sector and encourage overseas doctors to return to Iraq. Yet it is not known to what extent the law will achieve its goals and how the Iraqi government will implement it.

A growing number of Iraqi doctors are departing their war-torn country despite a shortage of medical professionals, namely because of threats to their personal safety, a lack of career prospects and unbearable working conditions.

The situation in remote areas such as Dahuk province in the north of Iraqi Kurdistan is worse, as doctors face more challenges and less support. The large number of Iraqis and foreigners who are displaced in Dahuk make health-care conditions there seem out of control.

In Dahuk, the imbalance between the number of doctors and patients has become excruciating as nearly half a million Syrian refugees and Iraqis displaced by the Islamic State (IS) onslaught in Iraq have found shelter in this area, while the number of physicians has been steadily decreasing as more and more choose to emigrate.

“The lack of doctors is an issue for Iraq as a whole … but [in] Dahuk [we are] suffering more than anywhere else,” Dr. Nezar Ismet, the director of Dahuk's Health Ministry, told al-Monitor. “We are trying not to shut down any hospital,” he added, “but we are hardly managing because of the lack of human resources.”

Dr. Qahraman Mohammed, 25, told al-Monitor, “I know three or four doctors who quit last year, and I know about 10 others who are planning on leaving the country. And if you ask the ones not making plans, they are definitely still thinking about it. More than 95% of the doctors here want to go abroad. Myself included.” He said he knew at least one physician trying to make his way to Europe through illegal means.

The capacities of the Health Ministry didn’t meet the needs of Dahuk’s home community even before the crisis, and the sudden influx of displaced families became hard to cope with. He said that if Dahuk had not had international support, "our health system would have collapsed.”

Then things got worse when an increasing number of doctors either quit medicine, joined the private sector or chose to emigrate, partly due to economic reasons.

The collapse of oil prices, the war against IS and a freeze on subsidies from Baghdad — not to mention persistent corruption — have wreaked havoc on Iraqi Kurdistan's finances, which in return cut the salaries of most government employees to reduce spending. Physicians now only receive between 25% to 40% of their monthly wages, and even then they only get paid every month and a half, Ismet said. Sometimes they only get paid every three months, Mohammed said.

There is currently one physician for every 2,500 people in the province, according to the Health Ministry’s director. Ismet said that the number of needed junior doctors amounts to 160.

Mohammed said, “You would expect this in Darfur, Yemen or Aleppo. Our situation is not much better than theirs. A disaster is in the making.”

By comparison, in east Aleppo, where medical staff say they are being systematically targeted by the Syrian regime’s airstrikes, aid groups estimate that there are only 35 doctors remaining — one for every 7,143 people.

“This problem is not new. When I was myself in med school in 1995, many of my friends went abroad,” Dr. Sabah Mohammed, the manager of the largest hospital in the city, told Al-Monitor. “But it worsened last year when the government cut salaries,” he said, referring to the situation as a new “brain drain.”

Since the military coup in 1968, consecutive waves of brain drain have dried up the number of trained medical personnel in Iraq, including after the US-led invasion in 2003, which led to a bloody civil war that paved the way for the rise of IS and yet another exodus.

A Middle East Institute article by Joseph Sassoon estimates that Iraq lost “probably 25-35% of its overall medical staff” just in the 18 months following Saddam Hussein’s fall. “With the departure of its professional elite, Iraq lost hundreds of years’ worth of experience,” Sassoon said.

Other factors explaining the current shortage is the inappropriate division of available health workers among the Kurdish provinces, as well as an insufficient number of students enrolled in Dahuk’s medical college over the past few years, Ismet said. And even an increase in med students now won’t have a positive impact until after they graduate in six years.

Besides having to include among their patients the civilians who fled the self-styled IS caliphate, doctors also have to treat those battling it. From the emergence of IS in June 2014 until the end of 2015 alone, 7,300 Kurdish peshmerga fighters were admitted to public hospitals. A project to build a military hospital to treat the peshmerga has fallen through due to a lack of funding, and so wounded peshmerga are continuing to be treated in public hospitals.

For the freshly graduated doctors working in emergency rooms, the war against IS also means having to treat conditions their textbooks never mentioned, such as sniper wounds and chemical gas attacks.

“It's a disaster. There are sometimes patients we can't even treat because it's too crowded. We are exhausted. You can't concentrate and you might make mistakes,” Dr. Helin Suleiman, 26, told Al-Monitor. “Patients sometimes die because there are not enough doctors,” she said.

Pessimistic about how the situation will unfold, and sick of the incessant confrontations with patients’ families, Suleiman said that she, too, wanted to emigrate to “anywhere but Kurdistan,” although she said she will not because it would be inappropriate for a single woman to travel alone. “We are all thinking about quitting,” she insisted. “The situation will get worse and worse.”