In a wide-ranging interview, Sudan's foreign minister defends his country's actions on Darfur and said dialogue to further ease US economic sanctions on Sudan continues. 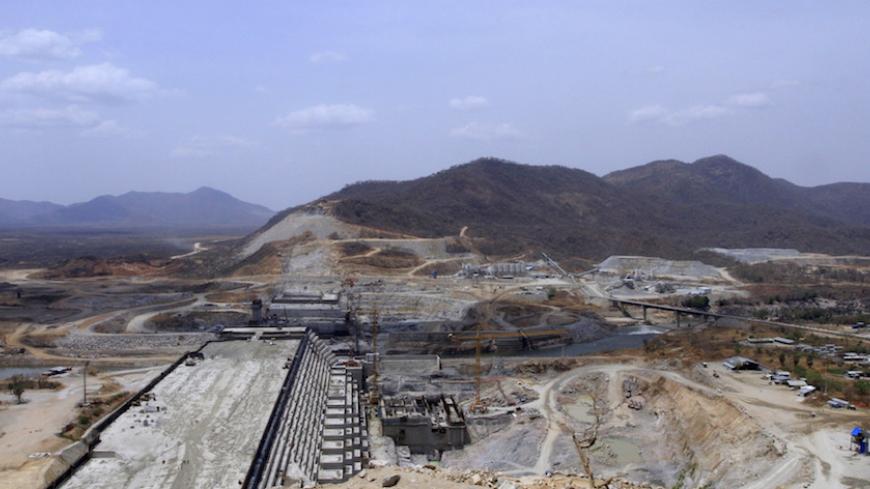 A general view of Ethiopia's Grand Renaissance Dam, as it undergoes construction, is seen during a media tour along the Nile River in Benishangul Gumuz Region, Guba Woreda, in Ethiopia, March 31, 2015. - REUTERS/Tiksa Negeri

CAIRO — As talks commenced between Washington and Khartoum to lift American economic sanctions on Sudan, imposed in 1997 after Sudan was listed as a state sponsor of terrorism, Sudanese Foreign Minister Ibrahim Ghandour told Al-Monitor that channels of dialogue and communication between Sudan and the United States would continue on all levels to reform ties.

However, he did not confirm any tangible results that could be announced yet, despite the positive indicators circulating among Sudanese politicians ever since Washington announced the partial lifting of economic sanctions on Sudan by allowing Khartoum to import communication devices, software and technologies in February 2015.

Al-Monitor interviewed Ghandour on Oct. 6 after the Supreme Egyptian-Sudanese Committee ended its session. “Sudan is keen on being transparent with the international and regional community concerning the situation in Darfur,” Ghandour told Al-Monitor. He denied that the United Nations requested the launching of an investigation on the use of chemical weapons in Darfur, and he condemned France’s request to begin an investigation into this issue. “No one will come to Sudan without being invited,” Ghandour said.

He also said negotiations on the Grand Ethiopian Renaissance Dam have "included political pledges that Ethiopia will not enjoy the benefits of the dam if Egypt or Sudan are subject to any harm."

Al-Monitor:  Sudanese politicians talk about a solution to restoring American-Sudanese relations and lifting of economic sanctions on Sudan, especially after several Sudanese officials visited the United States last year. Where are you on this issue, and do you have any indicators of a real change in the American position vis-a-vis Sudan?

Ghandour:  We look for normal relationships between Sudan and the United States. So far, talks are ongoing and we are still communicating on different political levels. Sudan is ready to open all doors until satisfying results are achieved.

Al-Monitor:  Despite the momentum that followed the US decision to ease economic sanctions in February 2015, the Sudanese government seems to have reservations about discussing this issue. Does this mean complicating the matter once more?

Ghandour:  We do not have any reservations. However, details of the results of the talks with the US administration into this issue will be announced at the right time. All we can confirm now is that Sudan is keen on making the dialogue successful and changing the US position vis-a-vis Sudan, especially after the efforts exerted by the Sudanese government to establish peace in Darfur, South Kurdufan and the Blue Nile.

Al-Monitor:  In an Amnesty International report, the Sudanese government was accused of using chemical weapons in Darfur. What is your position on the requests by the Security Council and the European Parliament to launch an international investigation carried out by the Organization for the Prohibition of Chemical Weapons into this file?

Ghandour:  Negotiations at the Security Council did not address demands to launch investigations into that matter. However, an official from United Nations Peacekeeping stated that the United Nations-African Union Mission in Darfur did not spot any use of chemical weapons. Moreover, any alleged evidence of chemical uses [is] weak. Most commentary in the Security Council session, especially those made by permanent members, confirmed that the evidence of incidents was weak, too.

Al-Monitor:  But France requested that an investigation be launched and said it was ready to take part once an international committee is formed. What do you think of that?

Ghandour:  France has nothing to do with this. Who invited it to participate? This is about Sudan and no one, not even those who want to, will come uninvited.

Al-Monitor:  Sudan’s foreign policy has lately shifted toward [an emphasis on] supporting relations with China and Russia. Will this policy make up for the weak relations with the West?

Ghandour:  Foreign policies are moved by interests. We will stand with whoever supports our interests as long as they do not interfere in our internal affairs. The Sudanese government is open to all political circles in the region and the whole world, and our relations with a country are not dependent on our relations with another.

Al-Monitor:  What is your perspective on the growing Russian role involving issues in the Arab world, especially in terms of Syria and Libya?

Ghandour:  It is not only the role Russia plays, but also the international interest in the Arab region. This influence is growing as a result of a weak Arab existence. What we look for is strengthening the Arab role. Negotiations by Arab foreign ministers in the last Arab League meeting referred to that matter, and Mr. Ahmed Aboul Gheit, the secretary-general, started the first session on Syria and the file under discussion now is Libya.

Al-Monitor:  Sudan and Egypt are both participating in the Libya Neighbors Mechanism despite their different positions on the Libyan issue. Which Libyan factions does Sudan deal with now?

Ghandour:  The Sudan government has a very clear position, which is to support the legitimate government in Tripoli under President Fayez al-Sarraj. The government came as a result of the Skhirat Agreement and it is the internationally acknowledged government.

Al-Monitor:  How about the Libyan army under command of Khalifa Hifter, which defines itself as the official military institution and is supported by Cairo?

Ghandour:  Hifter supports forces of the dissident Justice and Equality Movement, as they fight on his side in Libya. Therefore, our position is to support the legitimate government in Libya.

Al-Monitor:  How do you view the impact of the Supreme Egyptian-Sudanese Committee on the presidential level under presidents [Abdel Fattah al-] Sisi and [Omar] al-Bashir on the coordination and understanding between the two countries?

Ghandour:  Holding meetings headed by the two presidents represents a shift and turning over a new leaf in the relations between the two countries. The meetings resulted in signing 13 agreements in 31 different fields, as well as intensive meetings between ministers, experts and professionals in a positive atmosphere.

Al-Monitor:  Were there any agreements on the dispute between you and Cairo on implementing the Four Freedoms Agreement?

Ghandour:  It has been agreed to form a technical committee that convenes in November to look into that matter in Cairo. There are also clear political directives to solve this issue.

Al-Monitor:  How will you approach Egypt’s intransigence concerning its refusal to open dialogue and negotiate the issue of [the disputed border region of] Halayeb and Shalateen?

Ghandour:  Halayeb has always been a potential topic on any Egyptian-Sudanese table. No one could imagine solving this issue through a fait accompli policy. We imagine that the possible solution would either be a dialogue to reach a common understanding or resorting to international institutions that could adjudicate between us. We need honesty so that this issue does not remain on the table whenever there is a conflict between Egypt and Sudan, as we cannot imagine that the relations between the two countries could be depending on this issue.

Al-Monitor:  There are reports of Cairo seeking coordination with Sudan to open a new political path to negotiate directly with Ethiopia about its storing water behind the [Renaissance] Dam before waiting for the results of the technical studies that are expected to be completed after a year to determine the dangers of the dam. To what extent are these reports correct?

Ghandour:  The strategic agreement signed by presidents Bashir and Sisi at the end of the meetings of the Supreme Committee recommended strengthening the cooperation between the two countries. The dialogue between the two presidents addressed the importance of coordinating with other Nile Basin countries, especially Ethiopia. However, there are pledges that Egypt’s and Sudan’s shares of Nile water are where we draw a line in the sand.

Al-Monitor:  The slow pace of the Egyptian-Sudanese negotiations on the Grand Ethiopian Renaissance Dam [GERD] reflects Cairo’s disappointment toward reaching real guarantees to protect Egyptian and Sudanese water security. Is Sudan still confident about the continuing construction at the GERD site before waiting for the results of the technical committee to determine mechanisms of avoiding negative impacts?

Ghandour:  We are confident about the safety of the dam. We cannot gamble the safety of Sudan to support Ethiopia's building a dam that could destroy Egypt or us. We made sure that the dam is being built in a safe way so that Sudan is not harmed. I reassure that the negotiations that followed the three presidents’ signing the preliminary agreement on the GERD included political pledges that Ethiopia will not enjoy the benefits of the dam if Egypt or Sudan are subject to any harm. Sudan also made political pledges that Egypt’s water security cannot be jeopardized.