How Netanyahu is keeping secret his move to help Palestinians

Israel's failure to publicize a decision that benefits the Palestinians shows just how preoccupied Israel’s right-wing government is about a settler backlash. 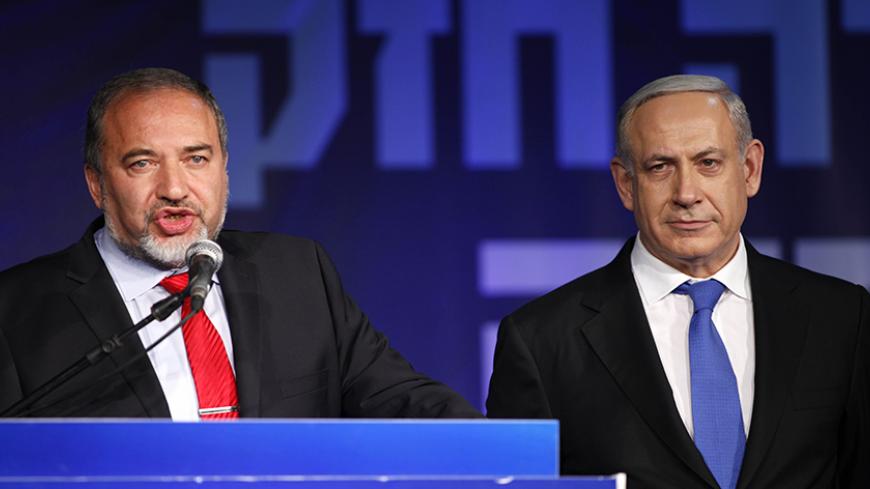 The public has been watching Avigdor Liberman with a critical eye since he was appointed defense minister at the end of May. Not only does Liberman lack any background in defense, while he served in the opposition, Liberman was not one to hold back his criticism of Prime Minister Benjamin Netanyahu. Instead, he insisted on offering his own solutions to eliminate the latest wave of terrorism and topple the Hamas regime in Gaza, and it will be a long time before anyone forgets his promise to kill Hamas leader Ismail Haniyeh within 48 hours if Hamas did not return the bodies of Israeli soldiers in its possession since the 2014 war on Gaza.

The surprises from Liberman haven’t stopped since. Take, for example, his attention-grabbing Oct. 24 announcement to the Palestinian Al-Quds newspaper that he would be willing to create an airport and seaport in Gaza provided that Hamas lays down arms.

This week we learned that last month, the Security Cabinet secretly approved a long list of zoning plans and construction permits for Palestinians living in Area C, which is under full Israeli control. It was all part of Liberman’s “carrot and stick” policy.

The plan was prepared by the office of the Coordinator of Government Activities in the Territories under Maj. Gen. Yoav Mordechai, where officials are well aware of the anger and frustration felt by Palestinian residents of Area C. While Palestinians see the housing units for settlers continue to multiply, they are not allowed to build in their own villages because of a supposed lack of approved zoning regulations or master development plan. In an interview with Al-Monitor, Raed Najjar, head of the Burin Village Council, said that the Civil Administration even denied him permission to expand the village school.

“They won’t allow us to expand our infrastructure or build new homes to ease the housing crisis,” said Najjar. “They even gave a demolition order for the Salman al-Farizi Mosque, which was built without a permit.” According to a B’Tselem report, Israel demolished 168 Palestinian residential units in the first half of 2016, leaving 740 people, including 384 minors, without a roof over their heads.

In contrast, a report released by the Israeli Central Bureau of Statistics on Sept. 27, ahead of the Jewish New Year, found that the settlements’ population growth rate in 2015 (4.1%) was double that of Israel’s overall rate (2%).

Some 60% of the West Bank, amounting to 3.6 million dunams, is defined as Area C, under full Israeli control. The ultimate authority in these territories is the Israel Defense Forces, through the Coordinator of Government Activities in the Territories. The division of the territories into distinct areas (A, B, C) was an integral part of the Oslo Accord (1993). None of the architects of this interim agreement imagined that this temporary division would last for more than two decades.

While there are no official statistics available as to how many Palestinian residents live in Area C, a 2014 report by the United Nation’s Office for the Coordination of Humanitarian Affairs estimated that the population was approaching 300,000. Some of these residents are Bedouin, who live in aluminum shacks and tents in temporary settlements without basic infrastructure such as electricity, water or plumbing. According to the report, only 1% of the territory is zoned for Palestinian development. Some 38 Palestinian settlements, home to about 6,000 people, are on territory declared “IDF firing zones” by Israel. Over 70% of the communities in Area C are not connected to electricity and water networks, forcing them to buy their water in containers that arrive in their settlements on an irregular basis.

In contrast, there are 125 Jewish settlements in Area C. Since the mid-1990s, another 125 illegal outposts that receive government support and assistance have also been established in the area.

“It’s too little, too late,” said Najjar in response to the decision. “We don’t know exactly what they approved and what they are planning to set up. We’ve been submitting [construction] plans for years and asking for permits for both buildings and infrastructure, but we’ve never received a positive response. We received contributions from the European Union and from other donors, who come visit us every now and then. They’ve seen how people live here. We’ve been screaming to high heaven for 20 years now, but nothing has budged here. Every building we put up they tear down. Even another 20 years isn’t enough to fix what was destroyed, and especially what was destroyed in our hearts.”

More than anything else, the Security Cabinet’s approval of the “carrots” without any publicity shows how decisions are made by Netanyahu’s right-wing government, and the influence that the settler leaders have on it. The recent decision may just be a meager answer to an enormous problem, and was a missed opportunity for Israel to adopt corrective measures in response to the EU’s sharp criticism of the demolition of buildings it funded and constructed in the West Bank.

It could also have been an opportunity for Liberman to prove to his critics that his “carrot and stick” really does include benefits and not just punishments. On the other hand, it seems as though concerns over the backlash from settlers, who consider any Palestinian construction in Area C untenable, outweigh any public, political, security or humanitarian ones.

Recall the response Liberman received when he first presented his plan in August. A letter he received from members of the Knesset’s Land of Israel lobby protesting the plan claimed that it would provide the support that Palestinian President Mahmoud Abbas needs to fulfill his own plans to take over Area C. Knesset member Yoav Kish of the Likud argued that it is inconceivable that benefits received by the Palestinians should be allowed to create intolerable differences with the Jewish population, which he called the main victim of Palestinian terrorist attacks.

Any government worried about the settlers’ response to its approval of projects necessary for hundreds of thousands of Palestinians under full Israeli control in those areas to go about their daily lives will be unable to move forward in a diplomatic process that demands much larger concessions.