After Obama, what comes next for US-Tunisia ties?

While the United States has a strategic interest in keeping Tunisia stable, its interest recently has been mostly lip service, and some argue things are unlikely to change after the November elections. 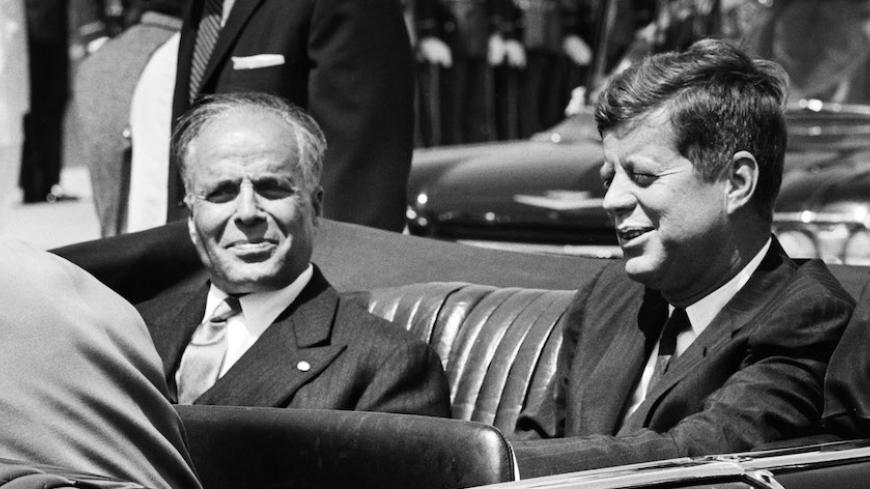 US President John F. Kennedy (R) and his Tunisian counterpart Habib Bourguiba ride in a car during Bourguiba's first visit to the United States as president, Washington, May 4, 1961. - ARCHIVE/AFP/GETTY

As a tiny, oil-less country that has historically been turned toward Europe, it can sometimes seem that Tunisia is too far removed to be a real strategic partner for the United States. So it might seem surprising that on May 3, 1961, President John F. Kennedy stood smiling on the tarmac at the Washington National Airport, ready to greet Tunisia’s first president, Habib Bourguiba.

“I think that it's most proper that the first head of state to pay an official state visit to this country in this administration should be President Bourguiba,” Kennedy said, waiting at the airport. The two presidents, who had been friends for years, greeted each other warmly, toasted each other at a state dinner and drove around New York in a convertible.

Tunisia’s relationship with the United States dates back to 1799 when — at the urging of John Adams — the two countries signed an agreement of trade and friendship. After Tunisia officially gained independence from its French colonizers in 1956, the United States was the first major power to recognize a sovereign Tunisia.

“US aid was very important in the early years of the republic, [in terms of] building infrastructure, the military [and] technical trainings,” Youssef Cherif, a Tunisian political analyst, told Al-Monitor.

With the North African country squished between pro-Soviet Libya and Algeria, the United States looked to Tunisia as a pro-Western stabilizer during the Cold War, Cherif noted. For decades, the relationship between the two countries was cordial and peaceful, though not without some sources of conflicts. Tensions came to a head in 1985, when Israeli forces attacked PLO headquarters near Tunis via aerial bombardment, killing between 47 and 200 people. President Ronald Reagan refused to condemn the attack, threatening to dissolve the relationship between the two countries.

Five years later, in 1991, anti-US sentiment in Tunisia reared again — this time over Iraqi leader Saddam Hussein’s invasion of Kuwait. However, economic incentives worked to patch up the two countries' relations, with USAID and United States-North Africa Economic Partnership programs bringing financial aid and investment into Tunisia. Until the 2011 revolution that ousted President Zine El Abidine Ben Ali, US policy toward Tunisia was mildly friendly — and if not dismissive, neither was Washington fully engaged.

But since the revolution, “the United States government started to pay a lot more attention to Tunisia and the relationship has grown stronger … with increased economic cooperation, security cooperation and increased diplomatic dialogue,” Sarah Yerkes, a visiting fellow at the Brookings Institution’s Center for Middle East Policy, told Al-Monitor.

Indeed, the continuing period of post-revolutionary democratic transition was enthusiastically received by the United States. “This is a real opportunity,” Jeffrey Feltman, then-assistant secretary of state for the Department of Near Eastern Affairs, wrote in an email to Secretary of State Hillary Clinton in early 2011.

“A lot of the US interest in seeing Tunisia succeed is not so much out of if they don’t succeed we will lose something major on a geostrategic level, but rather … it will be harder to make the case for democracy to take root in this part of the world,” said Sarah Feuer, Soref fellow at the Washington Institute for Near East Policy.

With Syria, Libya, Yemen and Iraq's having all descended into violent chaos that has brought about the killing and displacement of vast numbers of people, Tunisia has remained relatively peaceful. Still, its precarious geographic position, increased terrorist activity around the Mount Chaambi region, and exodus of young men and women leaving to fight in Syria and Libya have all been cause for concern.

Regionally speaking, Tunisia is a second-tier relationship for the United States. But still, “it is in the US interest to keep Tunisia moving forward toward consolidated democracy — or at least to prevent backsliding and the potential chaos that could cause,” Yerkes said.

To this effect, President Barack Obama's administration has focused on assisting Tunisia’s economic and security sectors. Tunisia has received hundreds of millions of dollars in loans and aid packets since 2011, with around $150 million worth of grants and loans in 2016 alone, according to Cherif. In 2014, the two countries launched a strategic dialogue, led by Secretary of State John Kerry. The following year, Obama announced that Tunisia would be designated as a major non-NATO ally.

Critics say that Obama can — and should — do more, pointing out that the financial packages Tunisia receives are far less than those of its regional neighbors, including Egypt, Jordan and Israel. Some are also concerned that the United States hasn’t recognized that Tunisia’s democratic transition is ongoing, and that the country requires more than security or economic assistance.

“What has been absent is the recognition of the continued need for support of the political institutions — parliament, the ministries, political parties, civil service reform, etc.,” said Yerkes.

With an election on the horizon, would a Donald Trump or Clinton presidency change that?

“In some ways I don't expect ... any radical change in the new US-Tunisia bilateral relationship, regardless of who wins,” said Feuer.

Trump, the Republican presidential nominee, has never publicly uttered a word on Tunisia. His foreign policy objectives are “so all over the place, it’s very hard to discern a coherent approach,” said Feuer, “but to the extent that [his] alliances need to be based on transactional relationships, I don’t know that he is going to feel inclined to help out a small, struggling state like Tunisia. Geostrategically, I could see him asking what are we really getting from this alliance.”

“With Trump, Tunisia will be regarded only from the security lens. … If Trump is president, Tunisia shall expect [fewer] symbolic gestures and less money toward development and democratization,” Cherif said.

The inflammatory comments Trump has made about Muslims and Arabs over the course of his campaign could potentially have negative implications. Hate crimes against Muslims have risen sharply in the United States, though Feuer points out that “in a kind of perverse way Trump doesn’t [seem to] have problems with Muslims who stay in the Muslim world.”

Clinton, a Democrat who was secretary of state during the Tunisian revolution, is widely considered a stronger candidate on foreign policy matters and the candidate more likely to continue to push for fiscal packages. “Clinton was a vocal supporter of Tunisia during the revolution and … I would guess she would be more interested in ensuring Tunisia’s success than the Obama administration,” said Yerkes.

But as Feuer points out, the biggest impact of a Clinton or Trump presidency will not come from the United States' direct relationship with Tunisia, but “in a potential change to the other major conflicts that stand to affect Tunisia quite significantly: Syria and Iraq, and the conflict in Libya. … If either one of them decides to take a more muscular approach to what’s happening in Libya, then you can imagine that if [the Islamic State] is really defeated, there could be folks coming back to Tunisia.”

Regardless of the US elections, that’s a grim reality for Tunisia.