Are US-Turkey military ties under threat?

Both Ankara and Washington seem to be oblivious to the changing nature of their relations. 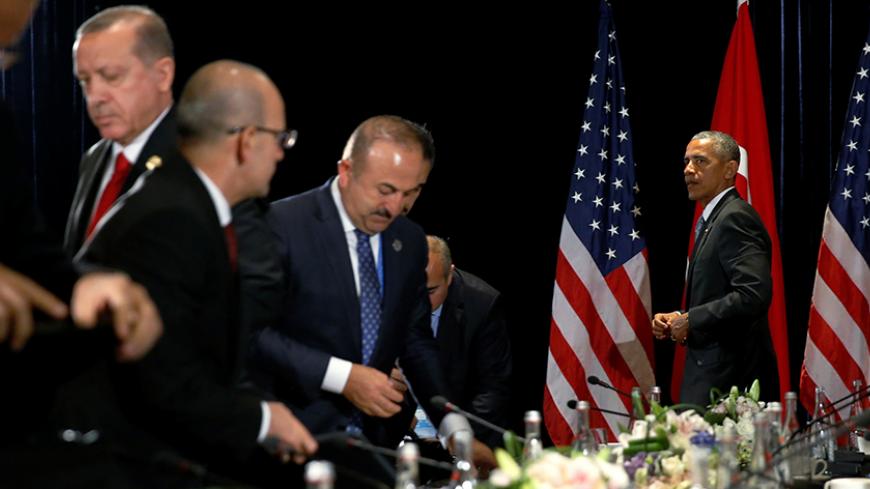 US President Barack Obama (R) tracks down Turkey's President Recep Tayyip Erdogan (L) for a brief private conversation after they gave remarks to reporters following their bilateral meeting along the sidelines of the G-20 summit in Hangzhou, China, Sept. 4, 2016. - REUTERS/Jonathan Ernst

Until two years ago, deep-rooted US-Turkey military relations were cited as a model of strength in the defense industry, military training and exercises, global peace support operations, global struggle against terror, NATO missions, and joint operations in Afghanistan. These were all signs of the high level of cooperation and interoperability between the US military and Turkish Armed Forces (TSK).

In those good old days, billions of dollars’ worth of defense projects between the two countries moved forward despite minor hiccups and, financed by the International Military Education and Training Fund, hundreds of Turkish officers and noncommissioned officers went to the United States for training. Every year, the two sides carried out about 20 bilateral or multilateral exercises and maneuvers, organized high-level military summits, and they even awarded each other medals of outstanding service.

The traditional model of US-Turkish military relations resembled a sort of "high politics" shaped behind closed doors by the Turkish General Staff and its US counterpart, where societal dynamics and the elected civilians of Turkey did not have much say. The relations were also an anchor of Turkey's untouchable links to the Western security bloc, thereby directly affecting Ankara's foreign policy choices.

Today, this traditional paradigm appears to be withering, as one can easily feel the cold winds blowing against US-Turkish military relations on the ground and at the diplomatic-strategic levels.

Ali Bilgin Varlik, a retired army colonel and an assistant professor of international relations at Esenyurt University in Istanbul, points to the societal dynamics that have begun to affect US-Turkish military ties, particularly after the July 15 coup attempt. Varlik told Al-Monitor that the Turkish public's lack of confidence in the United States has been overtaken by outright anger: "Turkey’s secular segments have been reacting to The Greater Middle East and moderate Islam projects the US was promoting at the beginning of the 2000s. After the 15 July coup attempt, the conservative circles of Turkey began to think that the US had planned the coup or withheld its support for the government against the attempt. … The net result is the loss of sympathy by most of the population. The 15 July coup attempt by Gulenists and the ongoing process for his extradition only amplified the lack of confidence in the US."

Ugur Gungor, a retired army colonel and associate professor of international relations, noted the government’s strengthening hand in civilian-military relations. "Now it is the civilian politicians of Ankara who determine the bilateral relations between the TSK and the US military and their cooperation in the field," he said.

Retired Gen. Ahmet Yavuz agrees with Gungor. Yavuz believes the United States, which sees the Syrian Kurdish group People's Protection Units (YPG) as a reliable partner in the struggle against the Islamic State (IS), is likely to maintain that relationship in the future. He also thinks that the United States intends to strengthen its diplomatic ties with the Democratic Unity Party (PYD), the Kurdistan Workers Party's extension in Syria, with the goal of replicating the Kurdistan Regional Government model of Iraq. But Washington also knows it needs the TSK's military support primarily for its Incirlik and Diyarbakir air bases in the war against IS.

Sources close to the US Embassy in Ankara, who asked not to be identified, view this perceptible weakening of US-Turkey military ties primarily as a structural issue rather than a result of daily issues, such as developments in northern Syria, the status of the PYD/YPG or the extradition of Fethullah Gulen. An American source in Ankara told Al-Monitor, "The constant daily changes in Turkey's attitude, the way Ankara comes up with excuses to turn down the alternatives we offer makes Turkey an unpredictable and at times incomprehensible actor. This ambiguity makes it hard for us to devise a robust structure for our military relations."

Another US source who also did not want to be identified said the transformation of civilian-military relations in Turkey that now allots a more prominent role to elected officials has been causing problems for the United States to identify the proper interlocutors in Ankara and in the field. "In the past, we had only one counterpart: the chief of staff. But now we don't know who we should be dealing with anymore. Shall we ask the chief of staff, the ministry of defense, the ministry of foreign affairs or directly the presidency?" he added.

A source in Turkey's security bureaucracy told Al-Monitor that the same problem also exists on the US side. In the past, the Turks generally knew who to approach in their military relations, but now that has become truly difficult: "In the old days, we used to coordinate NATO issues with the US European Command [EUCOM] and Iraq with Central Command [CENTCOM.] But today in Syria, for example, you have EUCOM, CENTCOM, Pentagon, CIA, the State Department and others. This complex structure creates issues of coordination between two countries and unnecessary misunderstandings."

Another US source said, "The US does not need to ask for Turkey's permission for steps it will take against [IS]. YPG forces in Syria have provided security for the international coalition fighting [IS] and proven themselves to be the best ally against terrorism. We still can't comprehend Ankara's intentions and final objective in combating [IS]. This is one reason for the loss of transparency and institutional deficiency in confidence between the two countries."

US sources note that when the civilian government in Turkey gains the upper hand, passionate narratives for domestic political consumption rather than rational reasoning take center stage. They note US officials resent the use of terms such as "selling out, back stabbing" in military relations between the two countries. Here, however, one must also take note of the deep suspicions in Ankara on whether US relations with the PYD are short-term, interested-oriented, purely military or a long-term strategic relationship that will have political ramifications.

"I think the US is still confused about its relationship with the PYD. The views of US Department of State officials who talk with us in Ankara do not mesh with signals we get from CENTCOM or the Congress," a source told Al-Monitor on the condition of anonymity.

In short, there is a major paradigm shift in US-Turkish military ties, but neither Ankara nor Washington appears to be aware of it. The following dynamics characterize the shift:

Finally, because of both Ankara’s and Washington’s obliviousness to these massive changes, there is no joint mechanism envisaged to manage and coordinate the new paradigm. This naturally means more crises, more confusion and ambiguity, and worse, disintegration of confidence in US-Turkish relations.

by Murielle KASPRZAK and Joseph SCHMID | AFP | May 26, 2022
END_OF_DOCUMENT_TOKEN_TO_BE_REPLACED