How will Turkey's Alevis react to Syrian gambit?

After years of facing pressure from the state and the country's Sunni majority, Turkish military involvement in Syria has caused Turkey's Alevi minority further problems in their relations with the AKP government. 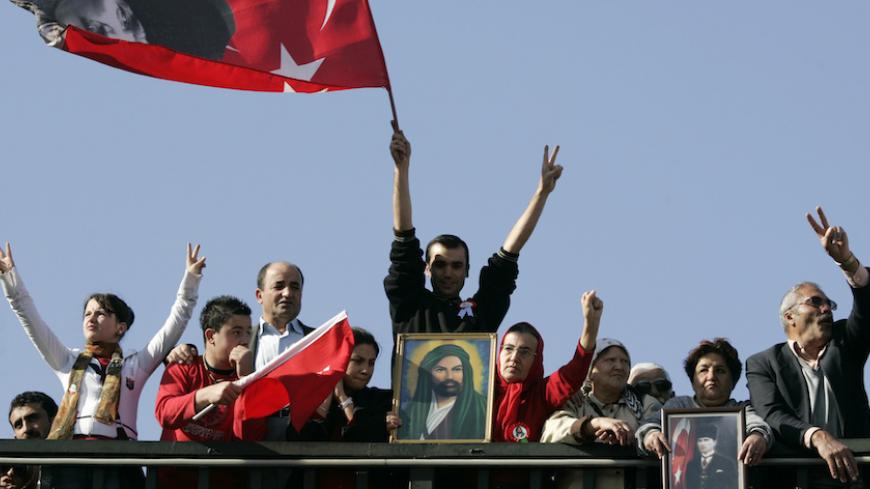 On the night of the July 15 coup attempt, a friend called from Nurtepe, a predominantly Alevi neighborhood of Istanbul. She was concerned about the hundreds of men marching on her street with sticks in their hands chanting Allahu akbar (God is Great). Turkish President Recep Tayyip Erdogan had called upon the people to come out on the streets and some saw it as an opportunity to intimidate Alevi neighborhoods.

Alevis have had notoriously sour relations with the Gulen movement, which many Turks suspect of orchestrating the coup attempt, so there was no reason to suspect Alevi involvement in the putsch. Indeed, at the end of August the government had announced that Dersim, a majority Alevi province, was the least infiltrated province by Gulenists among Turkey's 81 provinces. My friend, who had studied Alevi massacres in modern Turkey, was scared for her life. Has life as an Alevi gotten much more difficult in Turkey in the aftermath of the attempted coup?

Al-Monitor interviewed over 100 Alevis from different parts of the country to discuss this issue, which Turkey's mainstream media does not cover.

Erdal Dogan, a prominent human rights attorney, told Al-Monitor, "Any sort of military coup or intervention is a political situation almost all Alevis would refuse and resist; that was the first reaction of the Alevi community on July 15. Yet, the coordinated lynching attempts in heavily Alevi neighborhoods confirmed Alevi fears about security." Indeed, my friend's observations in Nurtepe were not isolated, several other Alevi districts were attacked in Hatay, Istanbul, Ankara and particularly Malatya.

Even if Alevis are the biggest victims and one of the most distant groups to the Gulen movement, pro-government media outlets published articles trying to generate conspiracy theories about Alevis collaborating with coup plotters. For example, daily Turkiye posted on its first page that "Alevi muhtar [elected head of a village or neighborhood] was ordered to massacre Sunnis." The allegations had no concrete evidence, no names of the muhtar, towns or other officials — just that it was in Hatay province on the border with Syria. Alevi leaders all around the country promptly issued a solidarity message against the coup attempt before tensions escalated any further.

A prominent sociologist from Istanbul who has done research in Dersim told Al-Monitor on condition of anonymity, "Since the coup attempt, the people of Dersim have all the bragging rights and they joke among themselves and [remind] outsiders, 'Did we not tell you [about Gulen]?' In 2011, Dersim held a 10,000-strong march against the Gulen movement. In Dersim, Gulenists were limited to the bureaucracy, over which local authorities had no control."

The sociologist, however, is concerned about the impact of the state of emergency law on Alevi communities of eastern Turkey. He said, "One of my colleagues in Dersim, an Alevi of about 60 years of age, told me, 'People of Istanbul or Izmir do not know what emergency law means, but for us, all of our life will be altered.' Now the city faces a double-edged sword with multiple areas announced as 'special sections' where your freedom of movement is significantly curtailed. Particularly people who are engaged in farming or raising livestock are quite bitter because their livelihood is directly affected by these regulations. They are angry against the government as well as the PKK [Kurdistan Workers Party]. … They also fear Islamic State [IS] attacks. There are rumors that Syrians settled in nearby areas are indeed IS supporters and that their first goal is to attack Dersim. Streets are deserted, people are scared to hold gatherings."

There are several issues that deeply worry the Alevi community. Alevis are not a homogenous group. While most are Turkish and some are quite nationalistic, there are those who are ethnic Kurds. But all are secular, so the intensification of Islamic rhetoric since July 15 scares Alevis.

Both on the day of the coup and thereafter, Erdogan's and other government officials' first reaction to terror attacks has been "the call to prayer will not stop." As comforting as this may be to some residents of Turkey, Alevis have suffered for decades of Sunnification. Building mosques and sending imams to Alevi towns have been a time-honored tradition of the Turkish government.

Now, Dersim suffers from this effort in another way, as a resident of Dersim told Al-Monitor. "They have put loud speakers into the mescit [prayer section] of the university, and now the whole city has to listen to the call to prayer five times a day. It is torture for us. We cannot hold our festival or visit our holy places due to security concerns. It is as if they would like us to leave our town. But if we go, we will be forced to assimilate so we stay where we can practice our faith," said the resident.

In addition, it has been all over the news that different Sunni religious orders have been allowed to perform their dhikr (devout Sufi chanting) ceremonies at the Presidential Palace in Ankara, just as they have been openly performing them at the democracy rallies since July 15. These performances could be enchanting for the believers of a religious order, yet worrisome for others. Considering members of such religious orders openly brag about naming Istanbul's new bridge that opened on Aug. 26 after Sultan Selim the Grim, who was notorious for his Alevi massacres in Anatolia, the ruling Justice and Development Party's [AKP] insistence on this name has alienated Alevis once more. Meanwhile, any talk about Alevi demands, such as the legal status of their prayer houses and exceptions to compulsory religious education for their children, are muted under the emergency law.

All Alevis interviewed told Al-Monitor they were concerned about the Turkish army's recent incursion into Syria. Hayri Tunc, a reporter and author who has provided diligent coverage from Istanbul's prominent Alevi neighborhoods, told Al Monitor, "There are very few if any Alevis who do not question the Turkish approach to the Syrian civil war. Especially Turkey's dubious relationship with IS and other jihadi militants is quite worrisome for Turkey's Alevis. Now that the Turkish army's incursions started, Alevis fear further attacks by IS inside Turkey. There are some Alevis who are against the PKK because they view the PKK as Sunni. There are also those who support the Kurdish struggle but not the war. Kurdish Alevis support neither the Syrian government nor Islamic entities in Syria."

On Sept. 4, several Alevi associations joined Kurdish groups on a hunger strike demanding to have a meeting with the PKK's captive leader, Abdullah Ocalan, to restart peace talks.

While Alevis are trying to make sense of life under the emergency law, they are not the only ones confused. On Aug. 29, seasoned AKP politician and parliament Speaker Ismail Kahraman told the press that Cuban leader Che Guevara (who is quite popular among Turkish leftists) is a "bandit" and "killer" and that Turkish youth should not be wearing T-shirts or pins with his image. This led to a boom in Che-decorated item sales. A young Alevi college student from Kadikoy told Al-Monitor, "I was not wearing any symbols of my faith for fear of attacks, but now I see that even a Che T-shirt could be a reason for hate. I think the country is at a breaking point."

The AKP's incessant intervention in individual rights and liberties, and encroaching violations of secularism worries Alevis. This, however, is not exclusively an Alevi issue in Turkey, and it is likely to become a major problem in the near future.