Women have regressed from a mere minority to a real rarity on Turkish political TV programs, and a protest movement is finding little support from their powerful male colleagues. 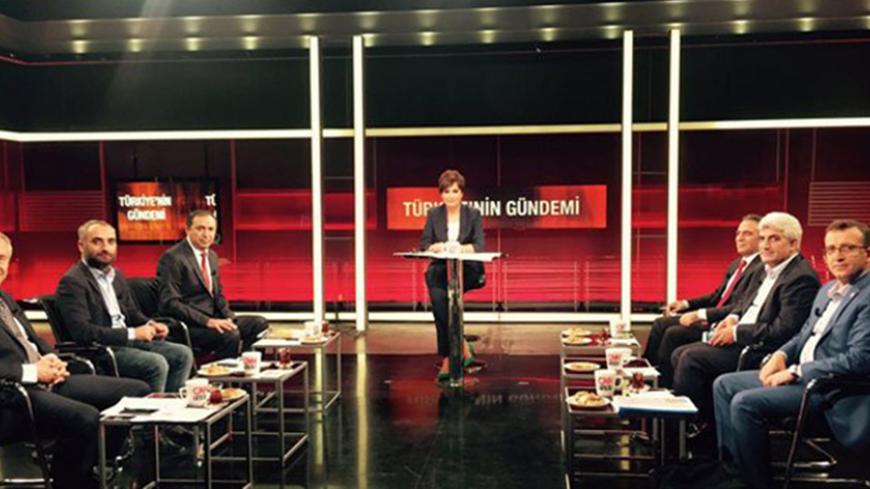 Since the July 15 attempted coup, the Turkish political sphere has been experiencing a gradual but perceptible masculinization. Increased security threats, expanded military operations into Syria and southeastern Turkey, emergency law, and continuing arrests and purges are facts of daily life now. This testosterone trend can also be seen on daily TV programs.

For most Turks, TV is their only source of information. Almost every night there are political talk shows featuring five to seven pundits focusing on a current issue. These shows are aired during prime time in the evening and they last two to three hours. For years, feminists have battled to have headscarved participants on these shows, yet as of late we see almost no women except for the moderator, whose personal views and analyses are rarely voiced.

At the end of August, Nilden Postalci, a communications scholar and political activist, along with a few others started a campaign on Twitter protesting all-male panels. Postalci told Al-Monitor, “Once the campaign started, it took off with two hashtags: #sirferkekpanel (all-male panel) and #menkafa (male/men head). Then Asli Tunc, a media professor from Istanbul Bilgi University, carried the issue to her column at the P24 website and we started to have a serious debate on social media.”

In her Sept. 4 column, Tunc reminded her readers how much these political discussion shows resemble Turkish coffee shops, where men sit sipping coffee and tea all day discussing politics. Tunc asks a rather difficult question, “Where are the women?” She highlights how important it is for individuals to take a stand against sexism all around the world and asks readers to sign a pledge to not be a part of all-male panels.

Tunc told Al Monitor, “Especially after the coup attempt in Turkey, the screens were filled with only male commentators discussing politics, security issues, military, etc. We started to hear only male voices, as if there are no educated, qualified women who can speak out on TV. Women were totally excluded from the serious media platforms and featured in light issues like fashion, cooking, reality shows, etc."

She reasoned that if some notable men would have the courage to actively join the campaign, producers would be likely to include female participants in the group. In the meantime, tweets poured in asking women not to watch programs where there were only male participants, as a form of protest.

Tulay Subatli, a journalist and the founder of the website Iste Kadinlar (Here are Women) — which focuses exclusively on the needs of businesswomen in Turkey — told Al-Monitor, “The message of increasing male dominance on the screen is, ‘Men are superior. They are the experts in all [security] matters, hence they should be the ones providing analysis.’ This is a mentality that ostracizes women from the public domain and, in some sections, it may be a rather unconscious choice. However, the solution is easy. The producers should make it a rule that unless half the panel is female, they will not air the show.”

Indeed, there is no shortage of women qualified to discuss politics or security issues, but when we look at the media we see what appears to be a conscious choice to segregate by gender. For example, pro-government channel 24 TV airs a weekly political debate program called "Kadinlar Meclisi" ("Women’s Parliament") where all panelists are females, along with the guests.

And it seems efforts to segregate by gender find support not only from Islamists, but from secular sections of society as well. For example, although they are Justice and Development Party (AKP) supporters, the regular participants (all journalists) and moderator of “Kadinlar Meclisi” don't present themselves as Islamist, and they don’t wear headscarves.

Al-Monitor columnist Kadri Gursel posted a tweet: “Those who demand female discussants on idiot boxes [TVs] — do they wish to watch women who are as illiterate, boorish and arrogant as their male counterparts currently on TV?” Indeed, Gursel voiced the thoughts of many men and women who are critical of exclusively pro-AKP contemporary mainstream media. As this is their first concern, they advise others to simply not watch television. Although this may be solid advice, it is difficult to follow for those who would like to observe the public closely. A majority of Turks watch these programs regularly.

How can we provide sound analyses of the country if we aren't aware of the information the public receives? Kumru Baser, a seasoned Turkish journalist living in London, is critical of the idea that people should just stop watching TV.

“Several analysts ignore that the problems of the media are multilayered," she told Al-Monitor. "With regards to the approach of the left [and secular sections of the public], we still remember there was a debate about the “future of the left in Turkey” where there were no female participants, and the lack of women on television did not, of course, start with AKP. Hence, the men of the left are quite comfortable with not having any female voices heard in public as well. Many of these men appeared on these channels, which were [actually] pro-AKP all along, when they were invited. Now that [these men] are banned [unofficially, by the government], their worry becomes the quality of female participants? For example, if there are no longer any female judges, can we say, 'Oh well, just ignore the justice system all together'? We cannot ignore the ‘idiot boxes,’ because millions watch them every night.”

As pro-Kurdish Peoples’ Democratic Party (HDP) politician Filiz Kerestecioglu explained, we have also seen an increase in male-dominant, macho politics, as not one female was nominated in the municipalities that the government took over after the coup and mostly from Kurdish mayors. HDP had introduced a 50% quota for women on all local positions, which was groundbreaking for the Turkish political scene, yet now all these accomplishments are being erased. Journalist Michelle Demishevich told Al-Monitor, “The message is clear: A woman's place is behind her man. Nowadays, women are asked to comment only upon women’s and LGBTI [lesbian, gay, bisexual, transgender and intersex] rights issues.”

Although media and social science faculties have a fair representation of women, when it comes to political and security issues, women are deliberately and frequently excluded in Turkey. Yes, male dominance on the screen is a global issue; however, several powerful men all around the world have openly declared they are boycotting all-male panels. Interestingly, this has not yet been the case in Turkey. Not even male or female hosts of prominent political shows are supporting the campaign. If women are not allowed to have a voice on security matters, how can we expect more women to become involved in politics?