Will Jenin’s only cinema be demolished to make way for mall?

Jenin Cinema faces the risk of demolition after it was put up for sale by its owners, and businessmen have made offers and expressed their intentions to build a mall in its place. 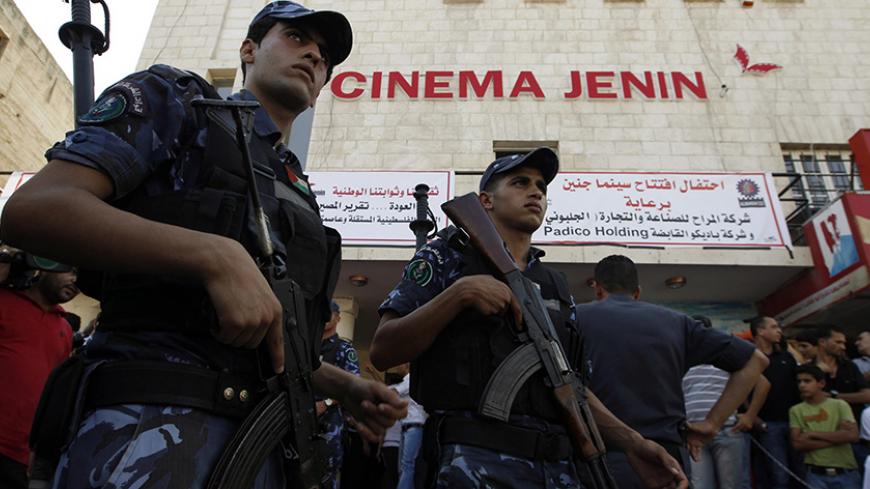 RAMALLAH, West Bank — The Palestinian Ministry of Culture is facing a major challenge as it considers saving Jenin Cinema, the only cinema in Jenin province in the northern West Bank. The cinema runs the risk of being demolished after its board of directors decided Aug. 23 to shut it down and put it up for sale, Jenin Cinema Director Lamih al-Assir told Al-Monitor.

The board's decision to sell the cinema — which was founded by four Palestinian families in Jenin in 1958 and was one of the largest and most successful cinemas in Palestine — was made after the cinema’s earnings tumbled over the last three years, leaving its owners with no other choice but to put it up for sale. As a result, the cinema that was the province’s only window to cinematic and cultural life shut its doors.

Assir, whose family is one of the cinema's founders and one of its largest owners, said that given its age, the cinema is seen as a cultural center of special character, and if the Palestinian Ministry of Culture does not intervene to buy the cinema, it will run the risk of demolition. A Palestinian businessman, whose name has not been made public, is seeking to buy the building for 1.25 million Jordanian dinars (roughly $1.7 million); he has proposed to demolish the cinema and build a mall in its place.

Several investors and businessmen have shown interest in buying the cinema, as it is located in Jenin's commercial center and is a public transportation hub for passengers from the surrounding villages and towns. According to Assir, four offers have been made by investors who are planning to demolish the cinema and establish a commercial project.

Assir explained that the board of directors wants to sell the cinema either to the Palestinian Ministry of Culture or to any Palestinian party willing to preserve it and keep it as a cultural and cinematographic monument. If the Ministry of Culture does not buy it, then the owners will have to sell the cinema to an investor who is likely to demolish it.

Since its opening, the cinema has been a center that witnessed many intellectual and cultural seminars, as well as Egyptian film and theater productions. Jenin Cinema closed Jan. 9, 1987, when the first intifada broke out and reopened Aug. 5, 2010, after it had been renovated and rehabilitated with German funding.

Assir said that when German filmmaker Marcus Vetter insisted on the first showing of his film “Qalb Jenin” ("Heart of Jenin") to take place at Jenin Cinema, it regained its stature as a cultural center. In this short film, which was funded by the German Foreign Ministry along with several German private institutions and financiers at a cost of 700,000 euros, Vetter documented the life and death of Ahmed Khatib, 12, from the Jenin refugee camp. Ahmed died after he was shot by the Israeli army in 2005. He was taken to Rambam Hospital in Haifa, where following his death his father donated his son's organs to six Israelis, four of them Jewish.

Following its reopening, Jenin Cinema faced great challenges. Chief among these was the societal rejection, as young activists in Jenin province accused it of normalization with Israeli institutions and figures, which led it to being attacked by unidentified parties on Jan. 5, 2011. In 2013, Assir stepped in and brought about reconciliation with the local community, according to Jenin Cinema public relations official Maysa al-Assir.

She told Al-Monitor, “The cinema became an important cultural center for the entire province as it organized cultural, entertainment and artistic events for all age groups, especially children. The cinema is now closed as we await the intervention of the Ministry of Culture, and we hope the ministry will buy it and preserve it.”

The cinema covers an area of ​​1,000 square meters (roughly 11,000 square feet), and has a multi-purpose hall that can host artistic and musical performances as well as cinematographic events. It has a two-level hall that can accommodate up to 350 people.

Minister of Culture Ehab Bseiso told Al-Monitor that his ministry is serious about finding a solution to the problem in cooperation with the owner of Jenin Cinema, the local community and the private sector, in order to preserve the building.

Bseiso said, “Not only does the ministry want to preserve the building, but it also wants to have the cinema operational. This requires concerted efforts on our part and on the part of all the concerned parties, and we will be keen on making such efforts in the coming period.”

He added, “Jenin needs a cultural and cinematographic center, which is why the ministry wants the cinema to be used for multiple purposes and serve as a film hall, a theater and a seminar hall. Therefore, all those interested in cultural affairs are required to participate in finding a solution to the cinema’s problem and cooperate to develop it.”

Iyad Stity, a musician and cultural activist who hails from Jenin, told Al-Monitor, “The cinema owners are entitled to sell it because we are not guardians of anyone’s property, but we hope it will be sold to a party that is keen to preserve culture and civilization in the city.”

He added, “The Ministry of Culture has taken several positive steps to address the Jenin Cinema crisis, and these steps have been of interest to those interested in cultural affairs. I hope that this building will remain intact in Jenin given its pivotal role in enriching Jenin’s cultural life, which requires everyone to join hands and work to preserve the cinema and treat culture as a priority in our lives as Palestinians."

Selling and demolishing Jenin Cinema, which is of great cultural value, for business purposes would deal a major blow to culture not only in Jenin but in Palestine in general. It will be a while before Jenin will be able to recover from such an event, especially considering that this film theater is the only one in Jenin province.