Will Gaza soon have its own aquatic city?

The Gazan government is seeking to attract more tourists to the Gaza Strip through its new project to build a first-of-its-kind aquatic city and fish park at Gaza’s seaport. 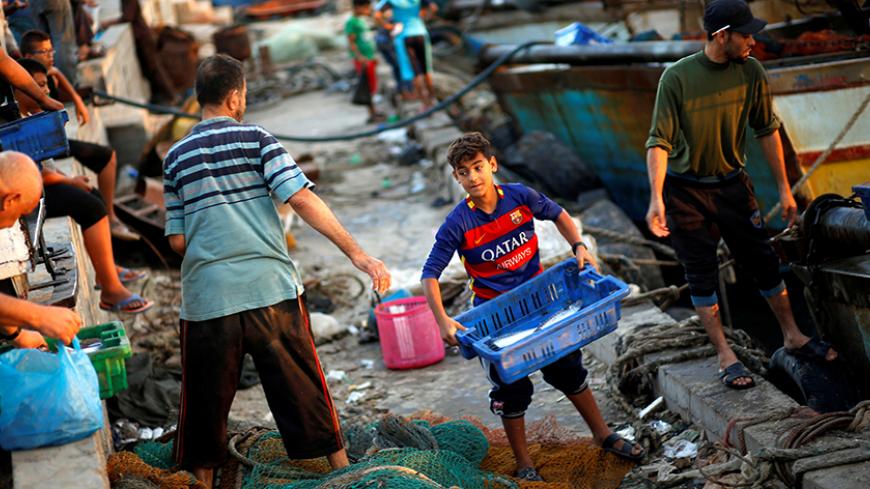 A Palestinian boy carries a container of fish as he works with fishermen at the seaport of Gaza City, Gaza Strip, Sept. 26, 2016. - REUTERS/Mohammed Salem

GAZA CITY, Gaza Strip — Funded by the Qatar Charity association, the Ministry of Agriculture in the Gaza Strip started on Sept. 20 a project aimed at building an aquatic city in the fishing port of Gaza City in cooperation with the Ministry of Transport and Communications, which allocated a plot of land for the construction of the project. The project should be ready by mid-2017.

The port of Gaza, which was renovated in 2015, is among the most important tourist spots in the Gaza Strip and is frequented by a lot of citizens during the holidays and on special occasions. The Gaza Seaport Authority developed it and established many service-based projects there, such as amusement parks, restaurants, cafeterias and recreational areas. It also allocated parking areas for cars and tour buses and provided new boats that visitors and tourists can take for a ride into the sea. The new aquatic city project is one of the new vital projects aimed at developing the port.

Mohamed Sorour, the director of the General Directorate of Roads and Projects in the Ministry of Transport and Communications, told Al-Monitor that the role of his ministry was limited to providing the plot of land for the project. He said, “I allotted a 2.5-acre plot of land for the project, and the plot is located in the port of Gaza and has been dedicated for the establishment of the aquatic city, which was proposed by the Ministry of Agriculture given the Gaza Strip’s need for such projects.”

Asked about the choice of the location, he said, “The port of Gaza is one of the most suitable facilities for such a project due to the large number of citizens who visit it, its proximity to the shores of the sea and the presence of fishermen, boats and all the fishing gear there.”

Adel Atallah, the director general of Fisheries in the Ministry of Agriculture, told Al-Monitor, “The project consists of two parts. The first consists of a hall that shows fish in large basins in a new artistic way. These basins are connected to the salty seawater. Also, the hall includes several screens showing different fish species that abound in the Gaza sea. The screens provide important and accurate information on these types of fish and highlight their importance.”

Atallah added, “The second part of the project consists of a large boat that serves as a maritime center specialized in training students and citizens on the work of fishermen and the tools they use inside the boat. The boat will be placed in a large glass basin of 17 by 5 meters [55 by 16 feet] into the sea, and it will serve as a training hall dedicated for mimicking the work of fishermen inside the boat placed in the sea. Also, the town squares and entrances will be prepared accordingly.”

He noted, “This outstanding project is the first of its kind, and it aims to give citizens and researchers a lot of information on fisheries in the Gaza Strip and create a fish park similar to other countries that have a lot of fish species and set it for public recreational use.”

Asked about the mechanism adopted to get the fish types, he said, “The Gaza fishermen find many different types of fish in the sea of Gaza. The bigger the fishing space allowed by Israel, the more fish types we obtain.”

Atallah added, “We resort to aquaculture to get fish species that are not available [in Gaza], and we either bring seeds from Israel through the ministry or ask fish dealers to retrieve, import and cultivate them in specially allotted ponds within the new city park.”

Israel allows Palestinian traders to buy fish seeds (fertilized fish eggs) and eggs and get them into the Gaza Strip through the Kerem Shalom trade crossing between Gaza and Israel. There are a lot of Palestinian traders who work in the field of aquaculture and create many fisheries that are well-equipped for aquaculture, and this generates considerable revenues for them.

An employee at Qatar Charity told Al-Monitor on condition of anonymity that his foundation funded the project at a cost of $364,000. He said, “This cost includes the design of the maritime city, which was designed in a way to serve as an integrated maritime exhibition center and park and a model that simulates the maritime environment. The cost also includes the preparation of the project and the hiring of workers to construct external walls, tile internal squares, plant grass in some areas, provide administrative services, establish exhibition rooms, construct a large hall for meetings and exhibitions, and provide 5-by-2.5-meter [16-by-8-foot] basins for large fish. Add to this the architectural, constructional, electrical and mechanical design and the full logistical support required by the maritime city.”

The source added, “Further, a boat needs to be restored to be used as a training hall and serve as a model that simulates the work of marine boats and include all of the tools used. Visitors can enter this boat-like hall to check out its components and work mechanisms, knowing that it will be placed in the sea, and a wooden bridge with a fence will be constructed to enable visitors and researchers to access it safely.”

Asked about the conditions that the design must take into consideration, he said, “The design must take into account aesthetic and environmental aspects and provide the necessary protection for visitors by building fences and concrete walls. Also, there should be plastic signboards inside the boat. A proposal for the installation and running of navigational electronic devices must be prepared as well.”

Samir Abu Mudallala, an economics professor at Al-Azhar University, told Al-Monitor, “Such projects are of vital importance to the Gaza Strip, being an additional source of culture. Also, such projects add field training that enriches students and researchers in the maritime field as well as fishermen. This project constitutes a real nucleus for a scientific training and research center that interests researchers and specialists in this field, and it is unique in Gaza.”

“The idea of ​​this project has two goals. The first is scientific, as it helps specialists and researchers in the maritime field, and the second is recreational and economical, as this city will serve as the ultimate destination for people seeking peace and quiet.”

According to the project’s plan, the aquatic city, if carried out, will have a leading role in scientific research in the field of fisheries.