The Foreign Press Association accused Hamas of imposing restrictions on foreign journalists entering the Gaza Strip, which the government denied. 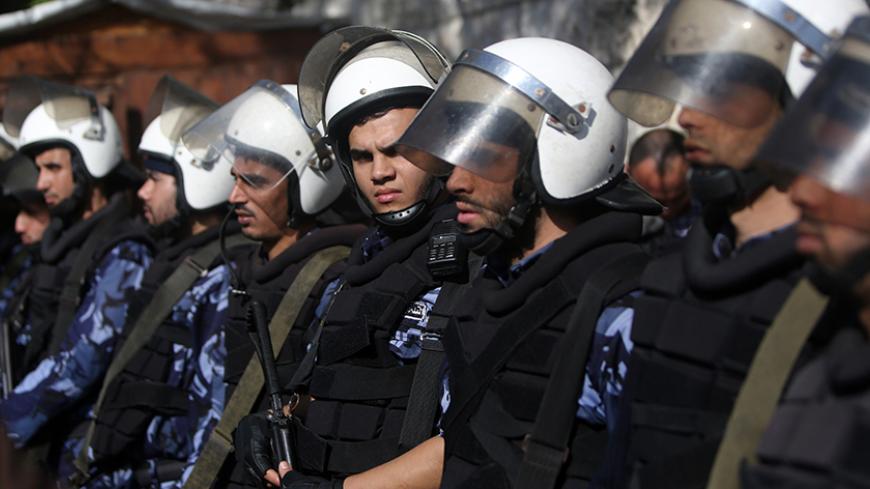 GAZA CITY, Gaza Strip — The Foreign Press Association accused in a statement on Aug. 22 Hamas and the security services in the Gaza Strip of imposing restrictions on the entry of foreign journalists to Gaza.

Josef Federman, the chairman of the association whose headquarters is located in Jerusalem, told Al-Monitor that it was not easy to take this position in the statement. He said, “Many alarming issues emerged in the past months: For example, a number of journalists were asked intrusive questions on entry [into Gaza], two other journalists — at least — were barred entry to Gaza and the procedures to grant entry permits to foreign journalists were changed.”

Federman said that the association has been demanding for several months to amend the procedures. These demands prompted a meeting between the association and the government media office in Gaza in July. A positive atmosphere prevailed at first during the meeting. However, during the same meeting, a member of the Foreign Press Association was questioned for 45 minutes for being suspected of recording the minutes of the meeting.

“A month has gone by since the meeting was held, and yet none of the issues that were discussed and agreed on were tackled. These issues included the [Gaza] government media office allowing the entry of foreign journalists who repeatedly visit Gaza and providing them with a one-year residency; ending the questioning of journalists upon entry to Gaza; expediting the issuance of entry permits, whose [current] slow process hinders the journalists’ work; and most importantly, reconsidering the ban imposed on the two journalists,” Federman said.

He added, “Nonetheless, journalists are still facing intrusive questions on the Beit Hanoun/Erez crossing, like questions about the reasons why they [journalists] were in Israel before arriving to Gaza. Meanwhile, the ban against the two journalists is still enforced. This is while the procedures when applying for an entry visa [permit] did not change. Despite all this, we remain hopeful that Hamas will honor its commitments to us.”

According to the abovementioned statement of the Foreign Press Association — which operates in Gaza through Palestinian journalists working in foreign media institutions — Hamas had prevented back in June freelance photographer Heidi Levine from entering the Gaza Strip, under the pretext that her work “reflects badly on Gaza.” The movement also banned New York Times reporter Diaa Hadid, who is based in Jerusalem and the Palestinian territories, from entering Gaza under the pretext of writing false reports, a journalist working with the Foreign Press Association told Al-Monitor on condition of anonymity.

For his part, the director general of the government media office, Salameh Maarouf, said the office had made several professional remarks to these two journalists about reports they had worked on.

Maarouf stressed that the media office informed the two journalists that in light of the current situation in Gaza, they would rather not welcome them for their own security, as these journalists have addressed sensitive issues related to the resistance.

Regarding the Foreign Press Association’s statement, Maarouf told Al-Monitor, “We, in the media office, sat down with the association on Aug. 12, and we agreed on several issues including facilitating and accelerating the entry process to Gaza. This is why we were particularly struck by this statement, as I also met with the association’s representative in Gaza just one day before the issuance of the statement. The latter had told me that they [the association] were satisfied with the newly agreed-upon procedures.”

Maarouf further stressed that Gaza is witnessing major security problems such as the recurrent wars, adding that the entry procedures are imposed on everyone — whether journalists or not. He said, “There are no particular procedures applied on journalists. On the contrary, journalists enjoy special treatment.”

He further considered the statement to be politicized, saying, “One of the Foreign Press Association’s members from Gaza decided to attend a meeting for the association in Jerusalem. Israelis prevented him from doing so. But the association’s statement did not mention this incident. For our part, we did not prevent any foreign journalist [from entering Gaza]. There are even journalists who did not abide by the procedures set for the entry into Gaza under the pretext of not knowing them, but were allowed entry and completed the procedures from inside [Gaza]. This refutes the claims of restrictions [stated in the statement] — the statement is politicized.”

The restrictions were not limited to foreign journalists, as local reporters were also affected. In this context, the Gaza Ministry of Health circulated to its hospitals on Aug. 18 a decision to bar the entry of myself in any hospital affiliated with the ministry in Gaza — without specifying the reasons.

Also, according to the decision, which was leaked to the media Aug. 21, hospitals are to avoid dealing with local media about a set of issues, namely suicide cases and medical errors occurring inside hospitals. The decision also stated that hospitals ought not to deal with foreign journalists, and to refer them to the General Administration for International Cooperation at the Ministry of Health.

For its part, the Public Prosecution in Gaza opened an investigation with several Palestinian journalists who had written investigative reports. On the morning of Aug. 28, the public prosecution in Gaza City issued an indictment against journalist Hajar Harb, based on five charges. This indictment came after Harb conducted a report about corruption in the health system, stating that fake medical cases needing treatment are sent abroad at the expense of the Palestinian Authority. This report was aired on Al-Araby TV network on June 26.

The Public Prosecution had previously questioned Harb: In July, the doctor who was accused in Harb’s report of corruption by selling fake medical reports to people to receive money that was supposedly used for referring a medical case for treatment abroad, filed a complaint against Harb. He accused her of “defamation, slander and libel.”

Harb told Al-Monitor, “The Public Prosecution contacted me on the morning of Aug. 28 to complete the investigation. The prosecution insisted that I make it to the prosecution’s headquarters in Gaza City at 12 p.m. Indeed, I went there with my lawyer and completed the investigation into the complaint filed against me. This is when I was charged with five accusations.”

She added, “The charges filed against me during the last investigation session included: identity fraud, slander of the Health Ministry, publication of a false report about corruption in the Ministry [of Health], lack of precision and caution in publishing information that damage the reputation of the Health Ministry, and affiliation with a foreign body by working with a media institution that is not recognized in Gaza by the government media office — in reference to Al-Araby TV network.”

The government media office in Gaza plays the role of a ministry of information; it is responsible for organizing the work of private radio and satellite TV stations, as well as the work of local and foreign journalists and reporters.

Although government parties insist that they are open to foreign and Palestinian journalists alike and that they are trying to facilitate their work, it seems the government also insists on targeting them in the framework of its oppression campaign against the media.