The closing of the center reflects a further deterioration in Hamas-Egypt ties. 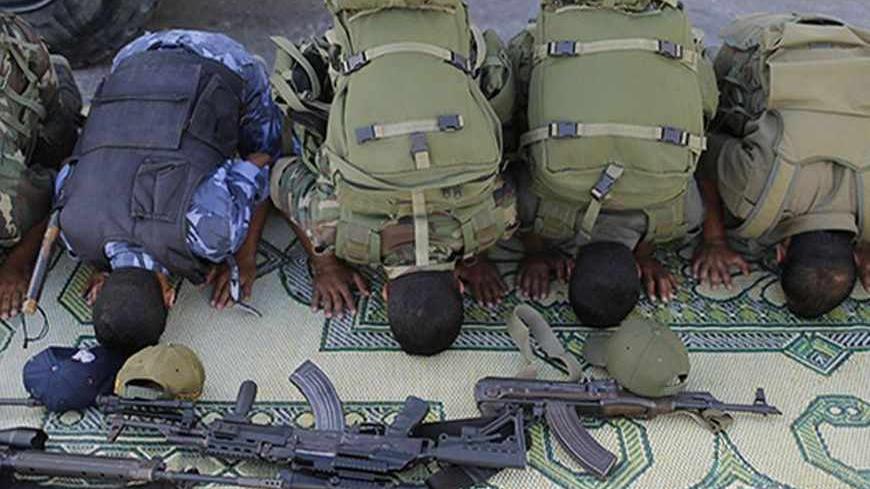 Members of Hamas security forces pray before a rally calling on Egyptian authorities to open the Rafah border crossing, at the crossing in the southern Gaza Strip, Sept. 17, 2013. - REUTERS/Mohammed Salem

GAZA CITY — Since the overthrow of Egyptian President Mohammad Morsi on July 3, relations between authorities in Egypt and Gaza have been in crisis. The situation worsened after Egyptian media accused Hamas, which heads the government in Gaza, of being involved in a series of attacks against Egyptian security forces in Sinai. Matters reached a critical stage after Egypt destroyed hundreds of tunnels along the border with Gaza and closed the Rafah crossing on several occasions, the most recent being six days ago; it currently remains closed. The crisis spiked again on Sept. 16, when an Egyptian military spokesman announced that the army had seized ammunition with the name of the Izz ad-Din al-Qassam Brigades on it.

“While monitoring [Hamas] elements, the Egyptian army discovered wires connected to electronic devices attached to bombs of various types along the border between Egypt and Gaza. The electronic devices and explosives were controlled from the Gaza Strip, which means that Hamas elements have been working on targeting the Egyptian army through ambushes,” claimed Col. Ahmed Mohammed Ali at a news conference.

The crisis has devolved into a cold war fraught with surprise, the latest of which was the above news conference, during which the army presented individuals confessing to be from Gaza and smuggling arms to the Sinai.

The Hamas government has been trying to maintain a diplomatic attitude throughout this tense period and thus far has issued only three official statements. Things are different on the ground, however. During two military parades for the al-Qassam Brigades, the rabea (Egyptian anti-coup) symbol was raised. Several Egyptians in Gaza have also been arrested, including Adel Abdul Rahman, 34, an official at the Egyptian Cultural Center in Gaza.

In an Al-Monitor interview in his office, Abdul Rahman said that at 9 a.m. on Aug. 31, Gaza security forces came to the center’s entrance in a military Jeep.

“The passengers were wearing civilian clothes. They entered the center and arrested everyone inside,” he said. He then described being beaten during the interrogation and said the other Egyptians arrested with him received the same treatment.

Abdul Rahman revealed to Al-Monitor that he had been arrested because of a statement the center had issued on Aug. 18 in support of the Egyptian army and its crackdown on rebels in the Sinai. He offered, “My team and I were detained late into the night. We were questioned about the statement, about the parties with which we are communicating in Egypt and about what we meant by the words ‘we will be faithful soldiers’ in the statement.”

According to Abdul Rahman, he and the others remained under arrest for more than 11 hours in separate cells. After being interrogated and beaten, they were released on the condition that the center be shuttered. The Egyptian Foreign Ministry condemned the arrests the day they took place.

“We closed down the center and removed the Egyptian flag for several days before reopening it again, however, discreetly,” Abdul Rahman acknowledged before identifying those arrested with him as Gehad Ahmed, Hisham Mohammad, Mohammad Ahmed and Shaima Maher.

Figures provided by Abdul Rahman indicate there are 7,000 Egyptian women with children living in Gaza. The center has been looking after them, economically and socially, since it opened about six months ago. There are also 14,000 Palestinians who hold Egyptian nationality in Gaza. The center provides them with legal advice on official transactions in Egypt.

Ashraf, 43, is among the Palestinians who hold Egyptian nationality. He asked that only his first name be used because of fears about the interview being published. His leg still hurts from the beating he received by the security services.

Ashraf told Al-Monitor, “They questioned us about the statement in which the center expressed its support for the Egyptian army. When they released us, they told us not to make any statements to the media.”

Al-Monitor paid a visit to Iyad al-Bazem, director of the information office at Gaza’s Interior Ministry. Bazem said that the government is not detaining any Egyptian citizens.

“I challenge anyone to provide the name of one person whom we are detaining because he is Egyptian. [Egyptians in Gaza] enjoy the same degree of freedom and security as Palestinian citizens do. Every Egyptian in Gaza is originally Palestinian and is treated the same as others,” Bazem declared. He claimed that Adel Abdul Rahman does not represent the Egyptian community in Palestine and that no one had given him that role.

Bazem told Al-Monitor that the arrests had been made because of citizen complaints about criminal and financial offenses by Abdul Rahman. He denied that the arrests were politically motivated. “They were asked about the statement because it purported to speak in the name of the entire [Egyptian community in Gaza]. The claims about violence and beatings are false,” Bazem added.

Al-Monitor obtained a copy of a document signed by the Gaza prosecutor stating that there were no lawsuits or complaints against Adel Abdul Rahman as of Sept. 1, 2013. Bazem, after looking at the document, nonetheless, said, “I assert that he has been accused of a criminal offense. No Egyptian in Gaza can be arrested for his political stance.” Bazem stressed the good and sisterly Egyptian-Palestinian relations and noted that the Egyptian Cultural Center had not been closed.

Amid talk that the Egyptian army might launch a military campaign against Gaza, the deputy prime minister of the Gaza government, Ziad al-Zaza, said during a meeting with journalists at the Gaza Museum on Sept. 16 that no one can enter Gaza, no matter how powerful or influential they might be, except by “friendly” means. He warned that if tried otherwise, Gazans would be willing to shed a lot of blood to prevent entry by force.

Zaza called for the formation of a joint committee with Egypt to investigate Cairo's accusations against Gaza. He denied that the al-Qassam Brigades were sending arms to the Sinai. Rather, he claimed, Gaza is a protective shield for Egyptian national security against Israel. He stressed that the accusations against Gaza are “fabrications and slander” and “part of a plan to demonize Gaza and Hamas.”