A bicycle adventure across Gaza

A team of five adventurers crossed the Gaza Strip on bicycle from north to south in a bid to draw attention to the youths’ inability to travel and study abroad. 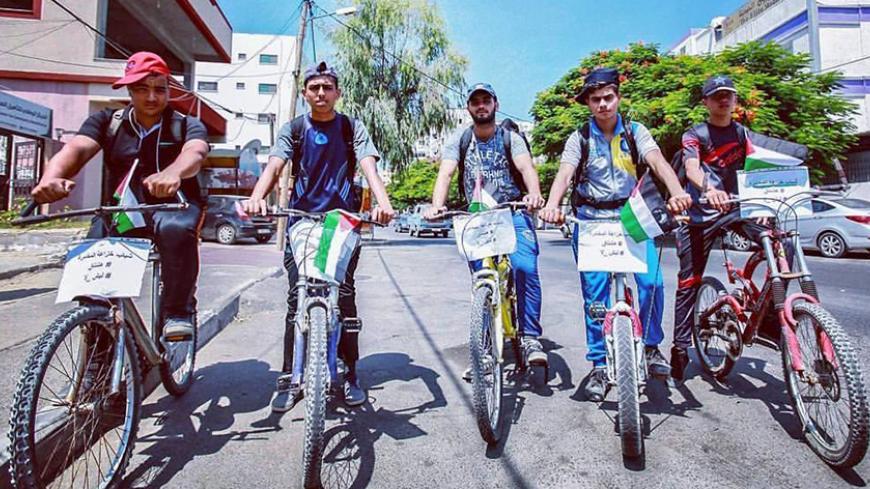 GAZA CITY, Gaza Strip — At dawn on Aug. 31, five young men from the town of Khuza’a, east of Khan Yunis — which Israel destroyed during the 2014 Gaza war — started an adventure that is the first of its kind. They hope to attract the world’s attention to their demand of breaking the blockade so they can travel abroad to complete their studies outside the Gaza Strip. The young men roamed Gaza’s neighborhoods from north to south on their bicycles. The trip lasted a week, during which time they slept on the roads and the seashore. They call themselves “The Five Adventurers.”

The Five Adventurers — Islam al-Najjar, Alaa and Adham Kodeih, Abel Raouf Abu Ruk and Abdullah Abu Mutlaq — graduated with honors from the same class in high school, from the scientific branch, in 2016. They agreed to complete their university studies together abroad, as they like adventure and wish to visit new places, and because the study fields they are interested in are not available in Gaza universities.

Najjar, 18, the team’s spokesman, told Al-Monitor, “After graduating from high school, we applied for scholarships to complete our studies abroad. But unfortunately we could not leave because of the blockade and the crossings’ closure.”

He said that they resorted to an initiative that would draw the attention of the concerned authorities, such as the Ministry of Education and the government, to their demands by going on a bicycle adventure that defied all odds, especially since they are from Khuza’a, which was destroyed by Israeli heavy shelling during the recent war on the Gaza Strip. Najjar added that his home was partially demolished and that the home of another team member was completely destroyed and he now lives in a wooden caravan.

Najjar said that they set off at dawn on Aug. 31, hoping that their wish to leave Gaza would become a reality. Their first stop was the Gaza seaport. Then they headed north to Beit Lahiya, where they spent the night on the seashore. They continued their adventure the next morning until they reached the Beit Hanoun/Erez crossing, which separates the Gaza Strip from Israel. Najjar said, “We got there hoping that our adventure would expand [in the future] to include the West Bank and that we could visit the cities occupied in 1948.”

On Sept. 4, they headed to the Rafah crossing, which separates the Gaza Strip from Egypt.

Najjar pointed out that during their trip, they visited archaeological and holy sites, such as the Great Omari Mosque in Gaza City’s old town and Qasr al-Basha in Gaza City to draw attention to the tourist attractions in Gaza. Although their trip ended Sept. 6 at the entrance of their town, they are still continuing with the initiative until they achieve their goals. Najjar said, “We started the 'Why Not' hashtag as the motto of our against-all-odds adventure, and we used the hashtag to spread pictures of our adventure to deliver our message to the world.”

Najjar said the “Why Not” hashtag expresses their desire to live like the rest of the world’s population, enjoying their full rights of travel, movement and education. He said, “Why not? Why can’t we ask for our most basic right, which is education?”

He pointed out that their message and cause shows the injustice of Israel toward the Palestinian people by depriving them of rights that are guaranteed by international and humanitarian conventions.

For his part, Mutlaq, 18, said they faced many difficulties during the adventure, especially as they were riding dilapidated bicycles that were damaged during the war, making them unsuitable for Gaza’s winding and sandy streets. They also stayed outdoors and did not see their parents throughout the adventure.

He stressed that their goal was to expand the trip and to study outside of Palestine. He hopes to obtain a scholarship to specialize in aerospace engineering, a field that Palestinian universities do not have. He regretted that no Palestinian entity is involved in helping obtain grants for studying abroad.

The five adventurers stressed that they were not backed by anyone and that they do not follow a political party. They represent all Gaza students who wish to complete their education abroad.

Alaa Kodeih, 18, who also wants to study aerospace engineering, fears that he and his teammates may lose the school year because of their inability to travel abroad. None of the adventurers has registered at a Gaza university. Kodeih pointed out that they tried in vain to get out through the Rafah crossing.

The Rafah crossing has been mired in problems since the summer of 2013. It opens only for a few days for patients and humanitarian cases. It has opened only 20 days this year.

Kodeih said, “We spoke with the Minister of Education and Higher Education Sabri Saidam. He promised to do his best to help us achieve our goals.”

Regarding their next plan to reach their goal, Abu Ruk, 18, said they are planning to set up a special reception for the international “Women’s Boat to Gaza” flotilla coming on the ships Amal and Zeituna, which are expected to reach the Gaza Strip in early October to break the 10-year blockade on Gaza. The adventurers intend to receive the ships on their bicycles and offer a special performance, stressing that they will not tire until they reach their goal and they will try anything that will help them achieve their dream.