Is Bibi a secret Trump supporter? 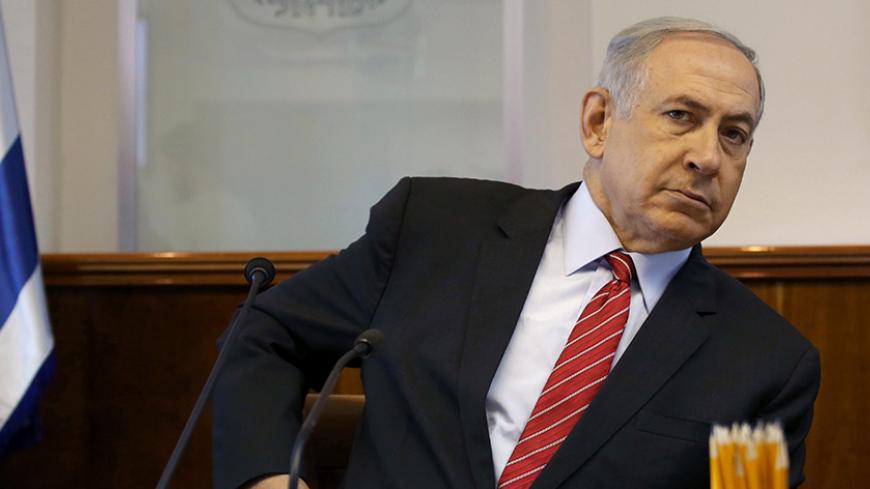 Israeli Prime Minister Benjamin Netanyahu has learned his lesson from the previous US presidential election campaign. This time, he is trying to maintain a neutral facade regarding the bloody battle between presidential candidates Hillary Clinton and Donald Trump. Israeli Ambassador to the United States Ron Dermer received instructions to keep his distance from controversial territory, and Netanyahu instructed his people to be discreet. They are not to externalize the silent prayers emitting from the prime minister's chambers in Jerusalem for the defeat of the Democratic candidate. Clinton is the last person who Netanyahu wants to see in the White House — even less than President Barack Obama.

On Sept. 9, Netanyahu had a small "slip" that betrayed a fraction of his real emotions: In an English-language public relations clip that was disseminated on the internet, Netanyahu spoke about the Israeli settlements in Judea and Samaria and said that the casting of settlements as an obstacle for peace is "perplexing." He compared the presence of the Jewish settlers in the West Bank to the presence of "nearly 2 million Arabs living inside of Israel."

Why, asked Netanyahu, are Israel's Arab citizens not viewed as an obstacle to peace, but the settlers are? Then he implied criticism of some ''otherwise enlightened countries'' (according to Netanyahu), which promote this scandal (to evacuate the Jewish settlers). He said, "Our region needs more tolerance, not less. … Societies that demand ethnic cleansing do not pursue peace."

This was a heavy hint directed at Europe, but not only Europe. The US administration is also known for its consistent opposition to Israel's settlement enterprise in the territories, and has much to say on the issue. As expected, Netanyahu's use of the explosive "ethnic cleansing" term aroused a storm. The prime minister was hit by criticism not only from the European Union, but also — and mainly — from Washington. The United States hurried to blatantly denounce Netanyahu's new clip and made it clear that its State Department was in "direct contact" with Israel regarding this statement, a message that it termed "inappropriate and unhelpful." State Department spokeswoman Elizabeth Trudeau said, "We obviously strongly disagree with the characterization that those who oppose settlement activity or view it as an obstacle to peace are somehow calling for ethnic cleansing of Jews from the West Bank."

Daily Haaretz reported Sept. 10 that the things Netanyahu uttered in the viral PR clip were taken almost word for word from a PR document written by high-level strategist Republican Frank Luntz in the "Israeli Project" in 2009. There, Luntz wrote that the use of the "ethnic cleansing" term is very efficacious when used to describe the settlement issue to an American audience. Dermer, one of Netanyahu's closest associates, worked for Luntz in 1993. Netanyahu's new foreign media adviser, US-born David Keyes, who is also connected to the American right wing, is viewed as the one responsible for the success of Netanyahu's viral PR clips. In a parallel universe, Luntz, Dermer and Keyes could have held senior positions in Trump's presidential campaign.

"This clip," said a high-level diplomatic source to Al-Monitor on condition of anonymity, "is a stab to the Democratic soft spot in general, and to Hillary Clinton specifically: the subject of settlements and the connection to human rights." According to high-echelon Israeli sources, Netanyahu directed his arrows precisely: Trump said several times recently that he supports Israel's right to build in West Bank settlements. "Trump differentiated himself from Clinton on the settlement issue in an effort to paint himself as a clear supporter of Israel," a diplomatic source in Jerusalem told Al-Monitor on condition of anonymity. "Therefore, Netanyahu's statements turning US policy on the settlements to supporting 'ethnic cleansing' is music to Trump's ears."

"Netanyahu did his homework," a senior Israeli official in Jerusalem told Al-Monitor on condition of anonymity. "This time, he drops heavy hints without leaving clear footprints. He will not host Trump for a fundraising event in Jerusalem as he did for Republican presidential candidate Mitt Romney in 2012. But he will say things from which people can understand that Trump's policies are more favorable to Israel than those of Clinton. The last clip is only one example. But Netanyahu wants to keep all his options open in case Hillary does win, as opposed to what happened with his failed bet on Romney in 2012."

The clip-issue hovering between Jerusalem and Washington serves to cloud efforts at coordinating a meeting between Obama and Netanyahu at the end of the UN General Assembly. Meanwhile, the US election campaign has been thrown for a loop by images of Clinton's stumble and near fall as she made an early departure from the memorial ceremony for 9/11 victims. Clinton campaign managers' worst nightmare just came true on live TV and is now broadcast from coast to coast; an image that is spreading on the web like wildfire. Great efforts were made by those in Netanyahu's environs to contain their glee and curb their enthusiasm.

The murky relationship between the Clinton family and Netanyahu has been reported on by Al-Monitor in previous articles. Netanyahu is keenly aware that should Clinton end up in the White House, it will be much harder for him to pit the Israeli public against her than he did against Obama. Obama, the first black president of the United States, bears "Hussein" as his middle name — a name that does not exactly inspire confidence in Israel, to say the least.

Clinton's near collapse at this critical juncture of her campaign is viewed in Netanyahu's court as a real miracle. The day after, the screaming (printed edition) headline of the pro-Netanyahu newspaper Israel Today (''The collapse, and the questions raised by it''), hinted at the new mood among the Israeli Republicans. It is not that Netanyahu knows what he would face with Trump, say his people, but simply that he knows exactly what to expect with Clinton. And he certainly does not long for that at all.