Egypt hopes to use soccer to score influence in Africa 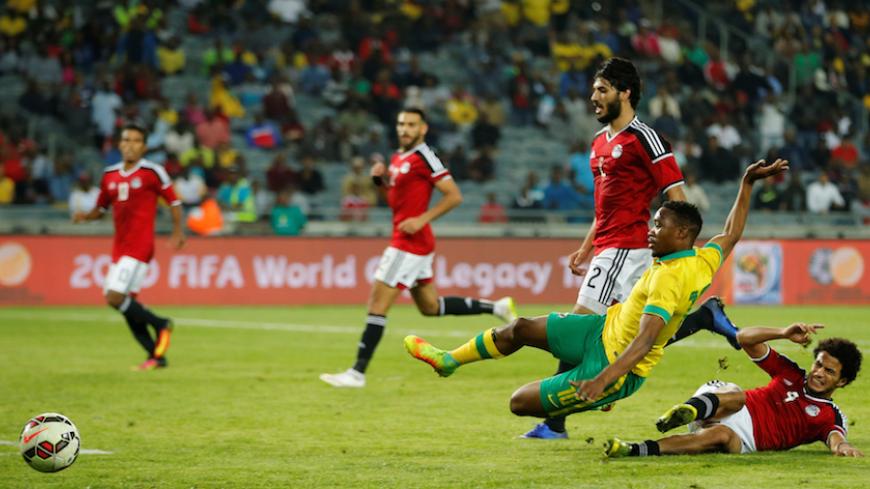 Ahmed Abou Hashima, an Egyptian businessman and owner of Presentation Sports, commented on the offer on his official Facebook page Aug. 30, saying, "We do our best to put Egypt's name at the forefront with regard to Africa in all fields, especially sports."

Many questions have been asked about why an Egyptian company would present such an expensive proposal during an economic crisis, doubting the political motives behind it.

"The proposal the Egyptian company presented to buy the broadcasting rights of African football honors the Egyptian people after the 30 June glorious revolution," Hamdy al-Sisi, a lawmaker and member of the Youth and Sports Committee in the House of Representatives, told Al-Monitor.

Sisi has stressed that this step puts Egypt back in the lead of Africa through the media scene, as these matches and live coverage for Egyptian soccer fans will surely bring them joy, especially those who cannot afford the monthly subscription of beIN Sport packages, as each championship has its own subscription fees.

Fans pay $0.50-$3 at cafes for one match, as the price changes from one cafe to another. Due to the large turnout, fans usually go to cafes to reserve seats a long time before the matches start. This supports the government’s claim that it benefits the fans through providing these matches after they have long been under the monopoly of Al Jazeera Sports Channels, which was later renamed beIN Sport. This step is expected to have a positive outcome among the youth and will not affect the economic feasibility of the company owning the rights since it will still be able to make a profit from pay-per-view international broadcasting.

Sisi ruled out the possibility that there are political motives behind buying the rights. He argued that a huge investment company and its shareholders will buy the broadcasting rights for a number as large as $600 million, plus the cost of relocating equipment for commentary studios before and after the matches. There will also be the costs of hosting world soccer stars to comment on the matches, as well as the cost of contracting with trained crews to cover the championship in an appropriate way. Therefore, neither the company nor the shareholders would go through such risk merely to achieve political objectives.

"Egypt is the main key driver of the Middle East and it remains the pulse of the Arab world. The fact that an Egyptian company obtains the broadcasting rights of matches indicates a lot, including Egypt's recovery from its crisis as it has come back to the African arena," Mahmoud al-Sayyed, a lawmaker and member of the Youth and Sports Committee in the House of Representatives, told Al-Monitor.

According to Sayyed, this step will attract large investments, multiply Egyptian media’s audience and enhance Egypt's image worldwide, which will consequently have a positive political outcome.

Sayyed said that the broadcasting of African matches should be marketed properly in Africa and the Arab world. This would help market Egypt politically as a stable country that enjoys security. Sayyed called for broadcasting ads before and after matches to show that the Egyptian street supports the current regime. He added, "Broadcasting African matches is a giant step toward the recovery of Egyptian tourism to where it was in the past, as well as propagating it in a way that suits Egypt’s ancient civilization."

Sayyed has stressed that the competition for the broadcasting rights of African matches represents a strong message not only to the main Qatari competitor, but also the Arab and African world.

"One cannot simply talk about returning back to the media scene now or about achieving media penetration into the Middle East and Africa merely because the broadcasting rights were bought," journalist and media consultant Yasser Abdelaziz told Al-Monitor. "Media penetration is not restricted to buying the broadcasting rights or broadcasting major and important events. However, it has more to do with the outreach, penetration and impact as well as the quality of content," Abdelaziz added, insisting that the Egyptian media is still not advancing.

Abdelaziz does not exclude the possibility that buying African matches could have to do with certain circles in the Egyptian state and society wanting to compete with the Qatari media industry, which has succeeded in penetrating the international media platform.

Abdelaziz added that some sectors in the ruling body and outside it look for recovering the old roles Egypt used to play, as well as using public means and tools to reinforce Egypt’s presence in the region. Therefore, he does not rule out the possibility that this could be part of the ongoing political recrimination between Egypt and Qatar. Abdelaziz also insisted that Egypt could neither achieve media penetration nor compete with Qatar at the moment. However, he said, the step Presentation Sports has taken is a giant one and could be considered a step in the right direction.

Abdelaziz added that the first step that should be taken is to reorganize the Egyptian media industry and to limit its breakdown.

Abdelaziz said that there are currently many foreign media investments such as Euro News, which is headed by Egyptian businessman Naguib Sawiris, and Abou Hashima's media projects. Both of them are close to decision-making circles in Egypt, which gives the impression that Egypt has finally realized that it lacks the media penetration needed to reach the outside world.