Research: No man’s land in Egypt

Rather than being appreciated as a way to advance the nation, research — whether political, academic or scientific — is seen as a threat to national security. 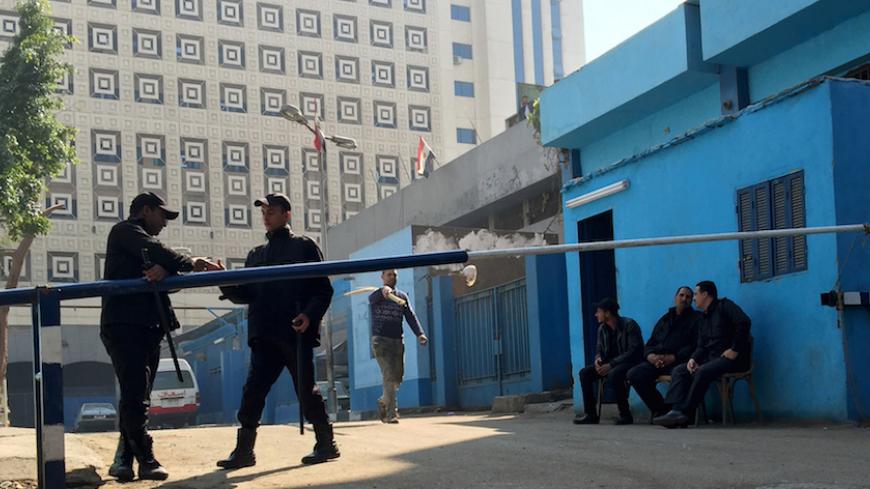 Policemen guard the front of a morgue where the body of Italian Giulio Regeni is kept in Cairo, Feb. 4, 2016. - REUTERS/Staff

An Egyptian was conducting a study on sewage systems back during the times of Khedivial Cairo (1867-1914). He had to apply for a permit from security authorities. Months later, his request was denied “for national security reasons.”

Ashraf El Sherif, a professor of political science at the American University in Cairo (AUC), narrated this story, explaining how research has always been a restricted field in Egypt, resulting in decades of stagnation. Because researchers collect information, they are perceived as spies in the eyes of both authorities and the public. With generations of politically and socially corrupt professors, along with the hostile environment, aspiring researchers often have to give up on their research or take it to different, more welcoming, shores.

“We were not taught how to do proper research and how to write reaction, review and critique papers,” Mohamed El-Gohari recalled, resulting in thousands of plagiarized theses or mere translations. Gohari, a researcher who previously worked at the governmental Al-Ahram Center for Political and Strategic Studies, describes the center as a “grave of researchers” where the work of young researchers is stolen and attributed to the “big shots.” Gohari later traveled to the United States to learn what he couldn’t under the Egyptian educational system and is now a researcher at the Atlantic Council.

Restrictions not only impede political research, but also academic and scientific research as well.

Legally and constitutionally, the free flow of information is legitimatized. However, it is conditioned upon never threatening national security, which is an elusive concept, thereby widening the umbrella of that which can be deemed inaccessible, according to Sherif.

“The security mentality governs every aspect of our lives. So regardless if you are researching [the architecture of] a building, homosexuality or religion, this security logic makes acquiring information and documents a gargantuan task,” said Gasser Razak, the executive director of the Egyptian Initiative for Personal Rights.

The gravity of the situation was brought under the international spotlight after the murder of Italian scholar Giulio Regeni. Researching labor unions, Regeni was followed by police officers before disappearing on Jan. 25 and reappearing 10 days later as a corpse bearing torture marks.

This approach is both associated with and a reinforcement of the centralization of power. The ideology posits that national security agencies are the guardians of the well-being of the state, and thus they are the only ones entitled to information, Sherif explained, adding that these agencies, namely the armed forces and national intelligence, refuse to be told “how to do their jobs.”

Indeed, following his research findings on how Islamic State affiliates have penetrated the ranks of the Egyptian army, researcher Ismail Alexandrani was locked up in November and faces charges of “spreading false news aiming at damaging the national interest and disturbing the public peace."

Alexandrani’s fate prompted several researchers to flee the country, including AUC professors. Emad Shahin, a professor of public policy at AUC who has also taught at Harvard and Notre Dame, was charged with conspiring with foreign organizations to undermine Egypt’s national security.

This ideology has a spillover effect into what Sherif called “the little bureaucrats,” i.e., employees in governmental agencies who are supposed to aid researchers, yet “could be more fascist than security authorities,” obstructing the process, sometimes for months on end.

To access the archives of official documents, one needs to apply for a permit from the security authorities. If the permit is denied, a researcher does not have the right to appeal, complain or inquire as to the reason behind the refusal.

Funds constitute another major obstacle in the face of research. While there is a shortage of local funds, receiving funds from foreign donors, universities or institutions is considered espionage. Fearing punishment if presumed “an enemy of the nation,” Nourhan Zaafarany, a doctoral candidate who majors in urban design and community development at Cairo University, had to abstain from applying for any funds or grants.

Furthermore, there is the issue of politicizing academia. Lack of academic integrity made way for professors with different political affiliations and views to meddle with research and fail or grade students unfairly. Some professors may cut out chunks of information “to protect students from other judges that might stigmatize or fail” students, Zaafarany stated. Guardianship reached the extent that thesis proposals were rejected or students lost their scholarships for their political activism, even on social media away from campus.

Interference with research is part of the pedagogical culture Egypt suffers from, elaborated Sherif. Although a student may be more advanced and updated than a professor, the professor deals with the student from the standpoint that he understands what the student doesn’t. Doctor of physiotherapy Mohammed El Nahas had to develop a new method for treating post laminectomy syndrome (pain after back surgery) as part of his master’s of physiotherapy at Cairo University. His thesis was refused, and he was instructed to use the traditional laser method. Nahas quit the program.

Lack of available information in Arabic, outdated official statistics, lack of transparency and bureaucracy further hinder research in Egypt, as listed by a number of researchers. Field research is a whole other bag of worms.

“The political realm and the media direction of the masses against anyone looking into any topic asking actually anything makes it impossible to do any field research on the public realm,” Zaafarany said. Cameras are unsafe to take out, usually sparking attacks by police or angry “honorable” citizens.

Political researcher and writer Nael Shama summed up the matter: “People in Egypt, no matter how intellectual or advanced their education was, do not appreciate the value of research. It is treated as a hobby, not an essential asset to the advance of any nation.”

On the rare occasion when a source does want to share information, concern drives them away. While completing his dissertation on Egypt’s foreign policy, subjects refused to talk to Shama or they regurgitated the official rhetoric. “One diplomat told me to pass by after 10 years when he retires, and he would give me the information I need,” Shama concluded.

“Academic freedom no longer exists,” Sherif said. Despite warning his students of the dangers of conducting research without exaggeration or oversimplification, he nonetheless gives them the freedom to choose. “I would never plant in them the culture of fear.”

In the end, Zaafarany had to change her case study from Cairo, a city she is passionate about researching, to Tunisia. She was so discouraged, she stopped her research for almost a year.