Egyptian President Abdel Fattah al-Sisi has been exploring a number of arms deals with France, yet critics argue this is aimed at buying European support at the expense of Egypt's economy. 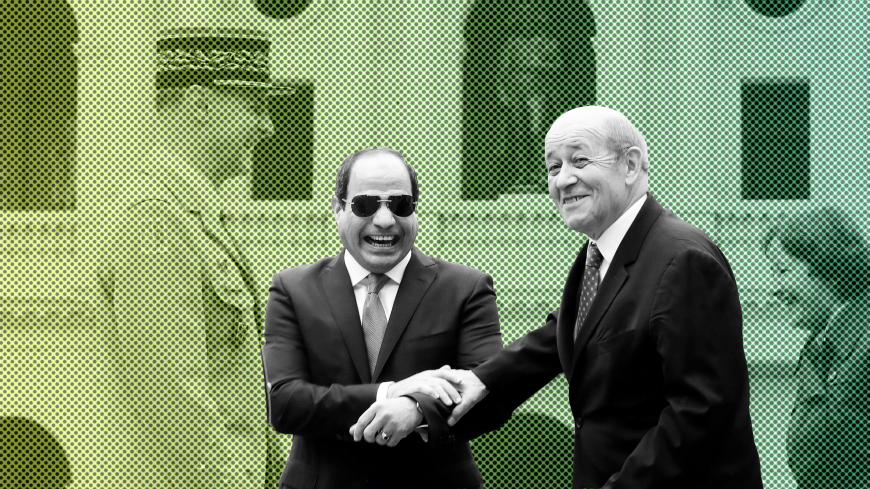 CAIRO — On Nov. 9, Egyptian President Abdel Fattah al-Sisi received French Foreign Minister Jean-Yves Le Drian in Sharm el-Sheikh at the World Youth Forum. During the meeting, Sisi praised the cooperation and distinguished relation with France that had materialized during his latest official visit to Paris.

Sisi had visited France on Oct. 24 for the third time since assuming office. The visit was economic in nature, which was evidenced in the size of the agreements and memorandums of understanding signed during the visit. The French Foreign Ministry announced several agreements with Egypt, including four loans in the fields of energy, health and social security.

Quwa, a media group that specializes in defense news and analysis of modern defense systems, issued a report Oct. 22 saying that the French Defense Ministry is interested in a sale deal of A400M Atlas airlifters and NH90 helicopters to Egypt, adding that such expected sales are worth billions of dollars.

During his latest visit to France, Sisi explored a new deal to buy more Rafale fighter jets. However, Dassault Aviation, the manufacturing company, refused to complete the deal with the same previous guarantees and justified this with the doubts concerning the economic deterioration in Egypt, according to a report by the French financial newspaper La Tribune.

Yahia al-Kadawani, lawmaker and undersecretary of the Egyptian parliament’s Defense and National Security Committee, told Al-Monitor in a phone interview that Egypt carries out deals in accordance with the armed forces’ need to upgrade arming capabilities and boost the defense system. “Egypt lies at the center of regional conflicts,” Kadawani said, adding, “If you don’t have a strong military in the Middle East, you’ll have no future.”

“We know that arms deals are a burden on the economy, but protecting Egyptian security from terrorist attacks is an urgent need nevertheless,” he continued.

According to Kadawani, any talk of the political leadership buying legitimacy with arms deals is a narrow perspective of what is actually happening, and the Egyptian president “is acting in line with the public interest.”

Yet others have a different take. “Consequences of the government’s inclination toward the expansion of loans will be born by future generations, which contradicts the idea of sustainable development,” Medhat al-Sherif, lawmaker and undersecretary of parliament’s Economic Committee, told Al-Monitor.

According to Sherif, economic reform does not only depend on reforming monetary and financial policies, as the government must sponsor economic development programs through reducing Egypt's budget deficit and corruption. “Egypt’s foreign debts have reached around $80 billion, which is a dangerous level for foreign debts,” Sherif continued, noting that Egypt’s latest arms deals are intended to raise the defense capacity since “sometimes providing a rifle is more important than providing farming tools.”

France called for reviewing its economic, security and military support to the Egyptian government as well as making such support conditional on a tangible improvement in human rights. However, French President Emmanuel Macron refused to give “lectures” to Egypt concerning civil rights, as he said in a joint press statement with his Egyptian counterpart Oct. 24. Macron said, “My deeply held conviction is that it’s in President Sisi’s interest to accompany the defense and consolidation of human rights by the Egyptian state, in the context that only he can be the judge of.”

Macron’s stance triggered fury with Egyptian rights defenders and writers. On his Facebook page, Shady Lewis, an Egyptian journalist, wrote, “Macron is a young president who can lecture Africans on their culture by criticizing overpopulation ... he cannot, however, lecture a dictator on human rights simply because his country is the world’s biggest overseas buyer of arms from France. Macron is a model of opportunism and sugar-coated criminality.”

Gamal Eid, executive director of the Arab Network for Human Rights Information, wrote on his Facebook page, “We’re not buying arms. We’re buying recognition and legitimacy from mongers.” In a tweet, Eid also said, “Macron knows the difference between business and human rights, but he chose to be a dealer.”

Egypt has had about 10 arms deals in the last four years, out of which Russia has had the lion’s share, as Moscow provides Cairo with about 70% of its weapons. Still, Egypt bought German submarines and negotiated a deal with France that included the Rafale and Mistral fighters. Egypt’s annual military spending reaches about $4 billion.