How Kurdish-Arab strife is hindering work of Syria's 'White Helmets'

The negotiations for a new office of the Syrian Civil Defense in areas liberated by the Islamic State in Syria have been interrupted by major skirmishes between the Arab and Kurdish forces in these areas. 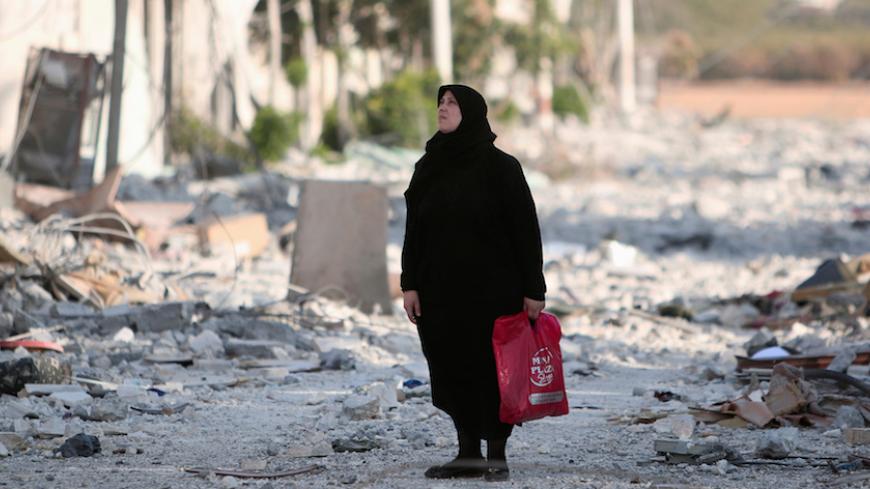 GAZIANTEP, Turkey — Negotiations to set up a branch of the Syrian Civil Defense (SCD) in areas recently retaken from the Islamic State (IS) have been halted, as a severe lack of trust continues to undermine relations between Kurdish and Arab populations in the north of Syria.

The informal talks were held in late August between SCD members and those involved in the temporary management of the city of Manbij after it was taken from IS earlier in the month. One of the participants told Al-Monitor the talks were heavily affected by previous arrests of SCD members in a Kurdish-majority area in the same region, equipment confiscated and a center thought to have been shut down by the Kurdish People’s Protection Units (YPG) this spring in Afrin, the only Kurdish-dominated area where the group had previously been working.

SCD Aleppo regional chief Ammar Selmo told Al-Monitor “we want guarantees” that the same will not happen in Manbij, which was taken from IS on Aug. 12. Selmo had traveled to Turkey for a few days for meetings, but has since returned to Syria.

The SCD, also known as the "White Helmets," works in opposition-held areas and has been nominated for a Nobel Peace Prize.

That Manbij was taken from IS by the YPG-dominated Syrian Democratic Forces (SDF) — which reportedly gave it the Kurdish name of “Mabuk” — has raised concerns among those who point to recent friction between the Arab and Kurdish populations, noting that the majority of the town’s inhabitants are Arab and that any sort of Kurdish-dominated administration would create tension.

“We told them that our work is ‘one, two and three’’’ — meaning that the specific, civil tasks the group is responsible for were explained in detail, to avoid potential misunderstandings — and that we do not want to be involved in the political or military situation. We want to provide aid, and we want guarantees that they will not put their hands on the [SCD’s] center or on the members,” Selmo said.

The Turkish army and the Free Syrian Army (FSA) groups have made gains in northern Syria against IS since Operation Euphrates Shield began on Aug. 24, while the Kurdish YPG withdrew to east of the Euphrates following an ultimatum by the United States to either do so or have their funding cut. Meanwhile, the regime has succeeded in again besieging the opposition-held areas of Aleppo. All these events have shifted priorities for the moment and the talks have been suspended.

Though best known for their search-and-rescue operations under rubble left by the Syrian regime and allied forces’ airstrikes — which frequently target the first responders themselves in double-tap attacks — the SCD’s work extends well beyond that task. It also includes such vital services as the emergency repair of public utilities, fire fighting, first aid, emergency evacuation of civilians, road clearing and demining.

The SCD had provided equipment to the Afrin center and sent a team to train the 12 women and 10 men volunteers for 15 days late last year, according to Selmo.

Initially, he added, the group had good relations with the YPG and “teams from Anadan and the western countryside [of Aleppo] came to Afrin and were not even searched at their checkpoints.”

”But after the regime got into it …” his voice trailed off.

The YPG has often been accused of working against opposition groups in collaboration with the regime by those who cite the Syrian regime’s longstanding support for the Kurdistan Workers Party and fewer regime airstrikes on Kurdish areas.

The Kurdish National Council — which is the main opposition to the Democratic Union Party, the YPG’s political arm — accused the group of the same offense in mid-July 2012, when the regime withdrew the majority of its troops from areas in which the YPG is dominant.

“We don’t know why, but the situation turned upside down. We just heard that the center was closed and that the members were in jail,” Selmo said, adding that equipment including a laptop, printer, ambulance and firefighting truck was confiscated.

A husband and wife, both from the Afrin team, spent a month in jail and after their release fled to Turkey, he said, and the contact numbers for the other members in the area “no longer exist.”

“I used to speak to them every day,” he noted, stressing that he did not know exactly what happened, but that the possibility that the armed groups had made the arrests and seizures has led to greater wariness in dealing with them.

The district of Afrin lies in a key area of northern Syria, bordering Turkey to its north and regime-held areas to its south. It divides areas held by the FSA and its allied Islamist groups that fight against both the Syrian regime and IS.

After several violent clashes between rebel groups and the YPG earlier this year — including on June 12, when a TOW missile was fired at a YPG position — fighters from a variety of armed groups backed by the international anti-IS coalition have had to travel regularly from Idlib into Turkey’s Hatay province. They would then come back into Syria via another border crossing not far from the southern border town of Kilis further east to each front lines against IS while avoiding YPG territory.

An Aug. 15 attack on a bus carrying fighters from FSA factions occurred just as they were about to cross the border near the Atmeh camp for the internally displaced into Turkey’s Hatay region. Dozens were killed in the attack, for which IS claimed responsibility.

Meanwhile, memories are still fresh of the parading through the city of Afrin on April 28 of the bodies of over 40 FSA fighters killed in battle over the town of Tel Rifaat against the YPG in the northern Aleppo province. Despite some SDF officials’ condemnation of the incident, it has frequently been cited in conversations Al-Monitor has had in recent weeks with FSA fighters and non-Kurdish residents of Aleppo. YPG supporters, meanwhile, often refer to all opposition groups as “al-Qaeda/Jabhat al-Nusra.”

The YPG generally allows non-Kurdish Syrian civilians to cross through Afrin but often stopped them from doing so in their own cars. A number of Syrians have told Al-Monitor that they must ask a resident of the area to drive for them if they want their car to reach the other side.

Afrin was long seen as a safer place to move to than other areas of the Aleppo province that are under daily attack from the regime's barrel bombs and airstrikes. However, after the violent clashes in recent months, few non-Kurds pass through it if they don’t have to.

Selmo noted that one SCD member from Marea tried to cross through Afrin with a firefighting vehicle that he was taking to get repaired in the western countryside of Aleppo, and that the YPG had imprisoned him for 15 days without reason. “I spoke to someone from the SDF to help me,” Selmo said, and eventually got him out.

He added that he had asked someone from Jaish al-Thuwar, an FSA affiliate of the SDF with a large Kurdish component, whether the SCD's Afrin center could soon be reopened. He promised that they would discuss it, but over three weeks later, “I still haven’t heard back from him.”

“We fear the fragmentation of Syria,” Selmo said, adding that whether civil organizations are allowed to function in areas after they are retaken from IS “is a sort of test.”