US Vice President Joe Biden was in Ankara last week, and Cyprus and energy security joined Turkey's attempted coup and the Islamic State as discussion topics. 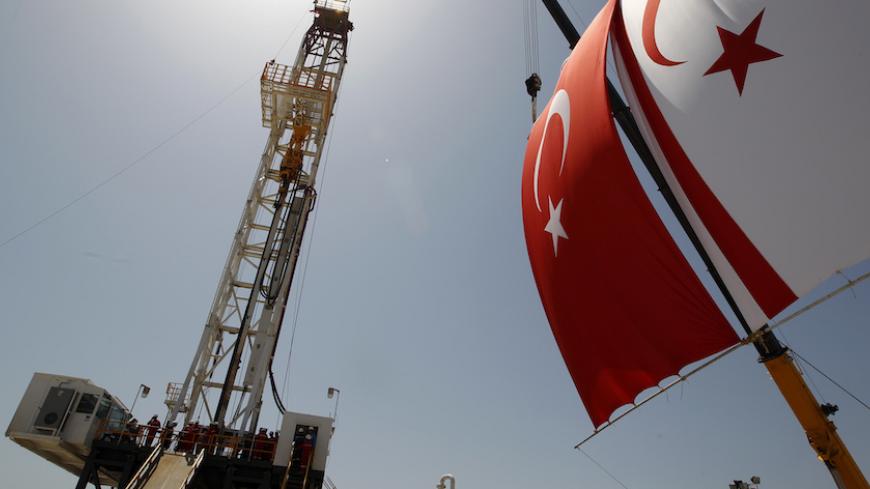 Turkish and Turkish Cypriot flags wave next to a drilling tower 16 miles from Famagusta, which is on the east coast of the island of Cyprus, April 26, 2012. - REUTERS/Umit Bektas

When US Vice President Joe Biden recently met with Turkish Prime Minister Binali Yildirim in Ankara, Turkey’s recent attempted coup, Fethullah Gulen and Syria were the main items discussed. However, in a press conference following the meeting with the prime minister, Biden highlighted two other points: The United States and Turkey have pledged to encourage Cypriot leaders to conclude negotiations on establishing a bizonal and bicommunal confederation, and Turkey and the United States will join efforts to support regional energy security.

Though few analysts focused on these items, it is worth noting that regional energy security actually is a factor linking the Gulen case, the situation in Syria and the Cyprus issue.

Biden finished his press briefing by saying, “We also spoke about how the United States and Turkey can continue to support Cypriot leaders as they work to conclude an agreement this year, hopefully that will reunify the island in a bizonal, bicommunal federation. And we discussed the joint effort to support regional energy security.”

This reference to Cyprus and energy security issues was not expected. Before his arrival in Turkey, Biden wrote, in an op-ed for the Turkish daily Milliyet, about the objectives for his visit. He mentioned US support for Turkey’s democratically elected government, US legal procedures for the Gulen case and the situation in Syria. In his article, Biden mentioned neither the situation in Cyprus nor regional energy issues. But they became subjects of his meetings nevertheless.

This is not the first time Biden has raised the issues of energy security and Cyprus with the Turkish government. When the vice president visited Turkey earlier this year, traveling to Istanbul in January, Cyprus and energy appeared on the agenda at that time as well. While meeting with then-Prime Minister Ahmet Davutoglu and President Recep Tayyip Erdogan, Biden noted that he had been in consultation with Israeli and Greek Cypriot leaders on power-sharing issues between Turkish and Greek Cypriots — a subject later White House briefings categorized as “energy security.” The two issues are, indeed, linked, as a resolution of the Cyprus issue will not only solve the problem of sharing the island’s natural gas resources, but would also prepare a safe maritime transit zone for Israeli and Egyptian gas, as it would reduce tensions stemming from disputes over Mediterranean territorial waters.

Biden also linked the Cyprus issue directly to European energy security as a way to limit Russia’s ability to use its energy supply as a foreign policy weapon during remarks at the November 2014 Atlantic Council Summit. In that speech, Biden had stated how he wanted to encourage Cypriots to develop their energy resources, in cooperation with all their neighbors, to benefit the entire eastern Mediterranean. “For the region, it holds the promise of enhancing stability and prosperity by bringing together Israel, Turkey, Egypt, Greece, Cyprus and hopefully one day Lebanon,” Biden said at that time. “It also has the potential to bring new supplies into Europe, to increase its energy security by diversifying energy resources.”

A glance at a map can easily fill in the missing piece of the comprehensive Mediterranean energy bridge Biden alluded to: “Syria’s Mediterranean shore,” west of the Euphrates River. Ankara has long insisted that the Kurdish People's Protection Units (YPG) should not have a presence west of the Euphrates. This has been underscored by Turkey’s recent Operation Euphrates Shield, which, while aimed at liberating Jarablus from the Islamic State, also aims at pushing the YPG east of the Euphrates, a notion Biden appeared to support during his Ankara visit. Syria’s Mediterranean shore not only has a strategic role for Mediterranean energy cooperation, but also represents a natural shore for Iranian and Iraqi energy resources having access to maritime routes linked with Europe, as envisioned in the Iran-Iraq-Syria gas pipeline project.

To meet its ambition of being an energy hub, Turkey should share a negotiation platform with the Syrian actor that has control of areas west of the Euphrates. Biden’s words clearly showed that Turkey and the United States would never accept this actor being the YPG.

The energy security deals defended by Biden also draw attention to the Gulen movement. In December 2013, Istanbul police launched an anti-corruption operation that arrested 80 people, including the sons of four Cabinet ministers. The government branded the investigation “an attack by an illegal group within the state,” meaning the Gulen movement. With the arrest of such names as Suleyman Aslan, the director of state-owned Halkbank, and Iranian businessman Reza Zarrab, the query made public Turkey’s barely legal gas trade with Iran via Halkbank. Restricted by US sanctions, Turkey had developed a gold trade formula — i.e., Turkey was settling its oil and gas bills with Iran using Turkish liras held in Halkbank. Iran was then using those liras to buy gold in Turkey, and couriers were carrying this gold in their luggage to Dubai, where it was then either sold for foreign currency or shipped to Iran.

In January 2013, Halkbank became the only authorized payment channel for Turkish oil and gas purchases. When, in March 2013, Erdogan was pushing ahead with plans to export oil from Iraq’s Kurdistan Regional Government (KRG) via the Ceyhan terminal, the plan was for money deposits to be handled through Halkbank. When the Dec. 17 operation unveiled the money trafficking and vulnerabilities in the system, KRG authorities canceled the deal, costing the Turkish government the energy revenues that would have stemmed from it.

This energy trade via Halkbank was barely legal (and hardly transparent) due to the limits drawn by the United States for the region’s energy trade. And this lack of transparency created opportunities for personal interests to make the state vulnerable. In this context, Turkish-American “joint efforts in energy security and the regional energy trade” would avoid these duplicitous operations.

Although Biden pointed to crucial issues during his visit, some Turkish media have reported on the Ankara meetings by writing headlines such as “Biden wasted a trip, Turkey wasted time,” or — when being more generous — writing that “Biden scored a minor diplomatic win.” Most analysts limited their commentary to the vice president’s remarks on the rule of law and the separation of powers. American media summarized the meeting by saying Erdogan was seeking Gulen's extradition, while the European press did not look further than Turkey’s Jarablus operation.

The media’s selective perception for Biden’s visit has been limited to short-term analysis. Despite the media’s lack of notice, it is clear that Turkish and American decision-makers in this visit seem to have had a more long-term objective, with a deeper strategic approach, considering their decision to discuss the subject of energy cooperation, which is not only crucial for current Middle East conflicts and Mediterranean tensions, but for security that can build new strong links and shifting political roles.