Why do Greek Cypriots call Turkey the aggressor? 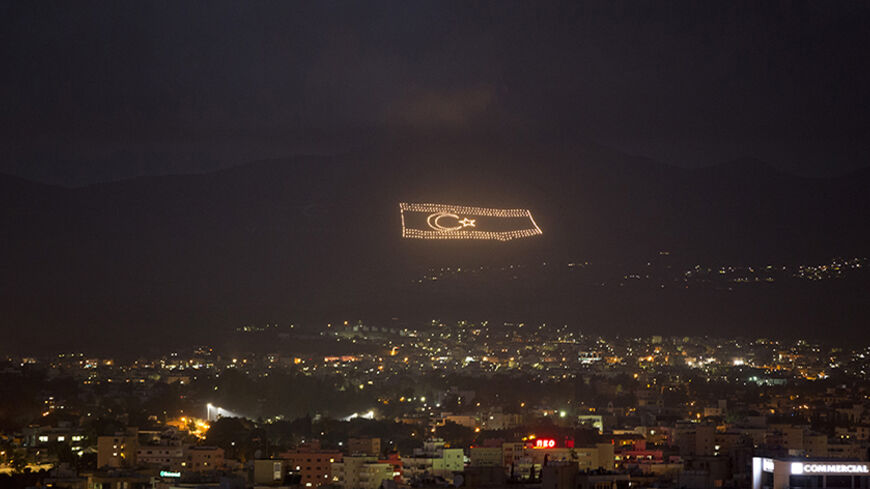 An illuminated flag of the self-declared Turkish Republic of Northern Cyprus, which is recognized only by Turkey, is seen overlooking Nicosia, March 12, 2014 - REUTERS/Neil Hall

Since the 1950s, there has been bad blood between Turkey and Greece over Cyprus. Turkey intervened in 1974 after a coup staged by supporters of union with Greece; the conflict has been frozen since then. Greek Cyprus joined the European Union in May 2004, only a week after the Greek Cypriot population by a decisive majority voted down the UN plan for the reunification of the island, adding to the complication of the conflict. EU-member Greek Cyprus has strengthened its international position at the cost of Turkish Cypriots.

The Greek Cypriot government therefore considered it to be its indisputable right to negotiate with foreign countries and international companies to explore and exploit the natural resources of the island without reaching an agreement with the Turkish Cypriots. In protest of that Greek-Cypriot approach, Turkish Cypriots signed an agreement with Turkey in 2011 calling for Ankara to prevent any unilateral move by the Greek Cypriot administration to explore hydrocarbon resources around the island, saying its natural resources should be exploited in a fair manner under a united Cyprus.

Against that backdrop, Turkey sent the seismic data ship Barbaros Hayrettin Pasha hunting for hydrocarbons to international waters off the coast of Greek Cyprus on Oct. 20. The Greek Cypriot Defense Minister Christoforos Fokaides claimed that the Barbaros and two additional vessels entered the Exclusive Economic Zone (EEZ) of Greek Cyprus and pronounced it to be a violation of all international and European maritime laws, undermining security and stability in the region. Not only did the Greek Cypriot side suspend the peace talks, blaming Turkey for being the aggressor on this issue, but on Oct. 24 Greek Cypriot Prime Minister Antonis Samaras sought EU leaders' support in Brussels to block any further progress in Turkey’s accession talks with the union.

On Oct. 21, Turkish Prime Minister Ahmet Davutoglu said that Turkey will not backpedal from its seismic surveys off the island. “The resources in Cyprus are for all Cypriots, and Turkey will continue its seismic surveys to search for oil and gas on Cyprus’ continental shelf; we have the right and we can use that right any time we want. Any step that excludes one side of the island is not acceptable.”

Speaking at Atilim University in Ankara on Oct. 23, former Greek Foreign Minister Theodora Bakoyannis said once again how the two sides were far from bridging their differences. While saying that Turkish Cypriots should trust the goodwill of the Greek Cypriot government, she argued, “The Greek Cypriot side only walked out of the negotiations after the violation of international law, because the Barbaros ship went into internationally recognized territorial waters of another country. This is unacceptable.” She said, “The two-state solution is not a solution. A united Cyprus inside the EU is the future for both Greek and Turkish Cypriots.”

Well-informed Turkish sources, however, told Al-Monitor that the Greek and the Greek Cypriot side was the one that was actually taking steps against a successful resolution for the peace talks, and was using the Barbaros as a scapegoat to walk away from the negotiating table. To be fair, however, it should be noted that the Turkish government has provided more than enough ammunition to the Greek side on this issue. The ruling Justice and Development Party (AKP), for example, said that it would recognize Greek Cyprus and open Turkey’s ports to it when the EU was deciding to open the accession talks with Ankara in December 2004. The Islamist AKP government wanted to pursue this opportunity as an attempt to affirm to both the international community and a concerned audience at home that it didn't have a hidden agenda.

While many Turkish analysts argued at the time whether Turkey had taken the right step by giving such assurances to the Greek Cypriot side, there is also much speculation whether the Greek Cypriot side is now trying to benefit from an environment where Turkey has come under a heated international spotlight due to its cozy border policy with Syria that gave jihadists like the Islamic State militants room to operate in.

The key — as noted by Nilgun Arisan Eralp, director of the EU Institute at the Economic Policy Research Foundation of Turkey — is that the Greek Cypriot side did not really succeed in isolating Turkey on this matter. “On the sidelines of the European Council, Cyprus — which has already unilaterally blocked six negotiation chapters [with Turkey] — stated that it will veto the opening of any chapter with Turkey from now on,” Eralp told Al-Monitor. “That was an opportunistic move. The European Council, which deals with mainly economic issues, did not officially react to Cyprus' aforementioned unilateral declaration. However, [a statement was issued] that says, ‘The European Council expressed serious concern about the renewed tensions in the Eastern Mediterranean and urged Turkey to show restraint and to respect Cyprus’ sovereignty over its territorial sea and Cyprus’ sovereign rights in its exclusive economic zone.’ Cyprus claims this statement as a victory, whereas Turkey argues that Cyprus could not get what it wanted from the European Council, which was a complete blockage of the whole negotiation process of Turkey.”

US State Department spokeswoman Marie Harf also did not provide Greek Cypriots the kind of support they might have expected. “The United States recognizes the Republic of Cyprus’ right to develop its resources in its exclusive economic zone. We continue to strongly support the negotiation process conducted under UN good offices to reunify the island into a bizonal and bicommunal federation,” she said Oct. 21. “We continue to believe that the island’s oil and gas resources, like all of its resources, should be equitably shared between both communities in the context of an overall settlement. And it’s important, I think, to avoid actions that may increase tensions in the region.”

The broader picture, however, is not that this crisis round will lead to the risk of military conflict at the Mediterranean, but that forces trying to supply the hydrocarbons from the region to international markets are aiming to isolate Turkey and Turkish Cypriots. Although Turkey is not dependent on this energy supply from Cyprus, it is a political signal that the Mediterranean will not find peace with this path forced upon the Turkish Cypriots.