A group of parliamentarians from Turkey visited Washington to try to ease tensions with the United States following a failed July 15 coup attempt. 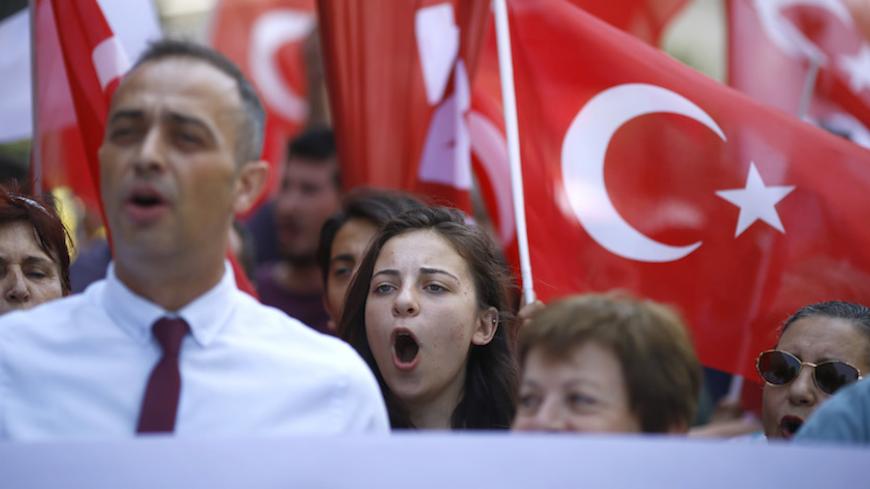 Demonstrators wave Turkish flags as they shout slogans demanding the extradition of US-based Islamic scholar Fethullah Gulen, whom the Turkish government blames for a failed July 15 coup attempt, during a protest near the US Embassy in Ankara, Turkey, July 19, 2016. - REUTERS/Osman Orsal

Turkey has sent multiparty parliamentary delegations to half a dozen Western countries, including the United States, Canada and Britain, to explain the Erdogan government’s massive crackdown following a failed July 15 coup and press the US government for extradition of opposition figure Fethullah Gulen.

In Washington on Aug. 1, Taha Ozhan, a member of the ruling Justice and Development Party (AKP) and chairman of the parliament’s Foreign Affairs Committee, told a small audience at The Foundation for Political, Economic and Social Research, a think tank that is close to the Turkish government, that “almost 99% of Turks think the coup was orchestrated by Gulen himself.”

Echoing the government’s line since the coup attempt, Ozhan likened the Gulenists to the group that calls itself the Islamic State (IS) and said they are “operating in more than 100 countries” where the Gulen movement has set up schools.

He also noted that Turkey and the United States have a treaty on extradition and asserted that under the treaty, Gulen, 75, who has lived in the rural Pennsylvania community of Saylorsburg since 1999, should be in custody while an extradition process unfolds. “Mr. Gulen should be detained and not allowed to speak to the international media,” Ozhan said.

Gulen has repeatedly denied any involvement in the coup, in which nearly 300 people were killed.

The Barack Obama administration has condemned the coup attempt but has not given an opinion on who was behind it. State Department spokesman John Kirby said Aug. 2 that the United States has received documents from the Turkish government in support of its request to extradite Gulen but US authorities “are still analyzing those documents, and I don’t believe that a judgment is made one way or the other yet in terms of whether it’s formal extradition.”

Gulen, a former Muslim imam and leader of a movement that stresses education and tolerance of other religions, was once an ally of Turkish President Recep Tayyip Erdogan and supported earlier purges of the military as the AKP consolidated power against Turkey’s former secular elite. In late 2013, however, the two had a falling out after Gulen followers leaked tapes of Erdogan and his son discussing corruption cases and apparent money laundering. In the lead-up to the coup attempt, the Turkish government closed numerous Gulen-backed publications and arrested scores of journalists.

Many Turks see Gulen followers as members of a cult and assert that they burrowed into Turkish institutions, including the military, judiciary and educational systems, benefiting from their earlier collaboration with the AKP. In the aftermath of the coup, the government has detained or fired more than 40,000 people.

The Obama administration and other Western governments have expressed concern about the depth of the purges and the impact on Turkey’s ability to assist the US-led coalition against IS. For a week, Turkish authorities cut off external electric power to an air base at Incirlik that the US Air Force has used to conduct raids on IS targets in Iraq and Syria for the past year.

Turkish media has denounced the United States as responsible for the coup either directly or indirectly. The Obama administration has sought to defuse the crisis by sending Gen. Joseph F. Dunford Jr., the chairman of the Joint Chiefs of Staff, to Ankara.

Members of the parliamentary delegation to Washington, who included representatives of the center-left Republican People's Party (CHP) and nationalist-right Nationalist Movement Party (MHP) but not the pro-Kurdish Peoples' Democratic Party — did not accuse the United States of direct responsibility for the coup attempt but expressed concern about the trajectory of US-Turkey ties.

Opposition party members said they would monitor the ruling party’s actions to make sure that those dismissed from their jobs or arrested were actually adherents of the Gulen movement.

“We are going to monitor and be very careful about the law,” Oguz Kaan Salici of the CHP told Al-Monitor. “Everybody has a right to due process."

Ozhan defended the large-scale crackdown on Turkish institutions, saying, “It is not an easy and clear job to fight against them [because] a schoolteacher can be higher [in the organization] than a general.” He also called Gulenists “messianic terrorists.”

Those invited to the event were given copies of a booklet called “FETO’s Coup Attempt in Turkey” that outlined events on the night of July 15 and early July 16. FETO refers to what the Turkish government calls the "Fethullah Gulen Terrorist Organization."

According to the booklet, “FETO claims to be a provider of education, and its members — governed by a strong infrastructure — promote themselves abroad as volunteers of education and peace. However, when we look at the organization, they conceal their real identities in Turkey and other relevant countries as they settle into critical state institutions.”

Aaron Stein, an expert on Turkey at the Atlantic Council, another Washington think tank the delegation visited, told Al-Monitor, “FETO is a term that the Turkish government began to use about a year ago to describe the ‘parallel state,’ or Gulen movement. The term coincided with the designation of Gulenists as a terror group and their addition to Turkey's ‘Red Book,’ or national security document, which lists the threats to the Republic. FETO was included in 2015, alongside the PKK [Kurdistan Workers Party] and ISIS [IS].”

The US State Department does not include FETO on its list of terrorist organizations.

Stein added, “The problem is that the AKP and ‘FETO’ used to be close allies, belying simplistic characterizations both in Turkey and in the West.”