Contrary to the prevailing view that President Recep Tayyip Erdogan has emerged stronger from the failed coup attempt, a seasoned eye can discern signs that Turkey’s strongman feels less powerful. 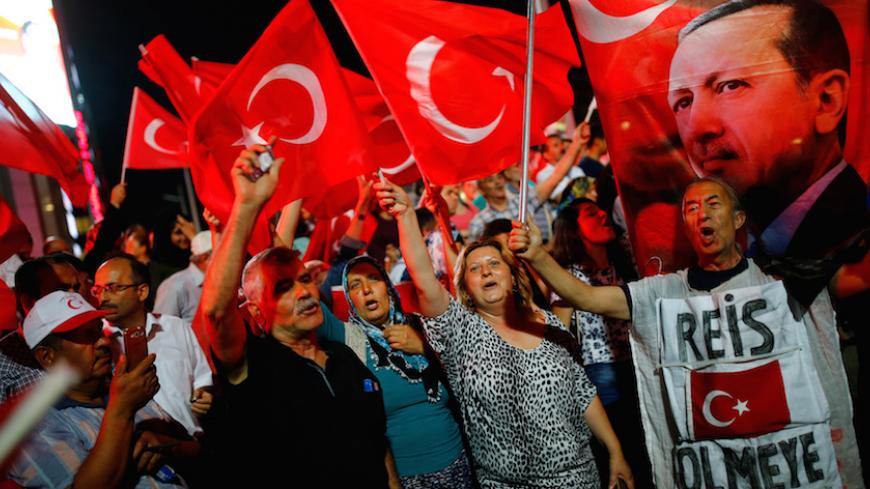 The prevailing view among punditry and the media, both Turkish and international, is that President Recep Tayyip Erdogan has emerged much stronger from the July 15 coup attempt and is now empowered to steer the country as he likes.

This assumption, however, is less than convincing for those who have closely watched Erdogan’s character, relationship with power and general political style during his 14 years in power. Erdogan’s statements and political behavior since the thwarted coup suggest quite the contrary — that he feels less powerful. The declaration of emergency rule and the draconian purge of the Gulen community — the decision-making and operational center of the putsch — may be projecting power, but that is an illusion.

In fact, Erdogan is readjusting his political behavior in a way that suggests he feels less powerful. The first signs to that effect came not immediately after the coup was suppressed on July 16, but several days later. Judging by the changes in his political attitude, he seems to have recognized a new reality sometime between July 19 and 20 — probably after an assessment of external rather than domestic implications — and decided to step back accordingly.

After the failed coup, Erdogan’s first address to his supporters was on the night of July 18 outside his posh house in Istanbul, perched on the hills of the Bosporus’ Asian shore. In that speech, he seemed confident he was now more powerful, very much in the style of “what doesn’t kill me makes me stronger.” This was evidenced by the fact that only three days after the coup bid he declared he would proceed with a project that did require him to be more powerful than ever. It was none but the project to erase Gezi Park at Taksim Square and replace it with a replica of former Ottoman barracks — the very spark of the 2013 Gezi Park resistance — which he had grudgingly shelved but had since become obsessed with.

The project will go ahead “whether they like it or not,” he told the crowd, and went on to give “other good news” — a plan to erect also a mosque on Taksim Square. It was the typical Erdogan who had lost nothing from his overbearing style even after weathering a mortal threat. It was the same Erdogan, who, in 2013, had closed Taksim Square to the opposition, including on May Day, stoking popular resentment that eventually boiled over in the Gezi revolt.

But in a couple of days Erdogan’s rhetoric and behavior in domestic politics began to noticeably change. The domineering Erdogan full of hubris was gone, replaced with one who clearly sought cooperation and support from the opposition. The first sign came July 20 as the main opposition Republican People’s Party (CHP) got permission to organize a "democracy rally" at Taksim Square. Opening the square to the opposition after a three-year ban was Erdogan’s first step of domestic moderation, which was followed by other decisions.

The same day he signaled he had shelved, at least for now, his plan for an executive presidency regime, which lies at the core of Turkey’s deepening polarization and the apprehension the opposition and civic society feel vis-a-vis him. “We will remain inside the democratic parliamentary system, we will never step back from it,” he told Al Jazeera.

On July 24, Taksim Square witnessed one of its biggest rallies in recent times as tens of thousands from almost all oppositional quarters joined the CHP-organized event.

On July 25, Erdogan invited CHP leader Kemal Kilicdaroglu and the chairman of the Nationalist Movement Party (MHP), Devlet Bahceli, to his palace to listen to their views on the coup attempt and its aftermath. He snubbed the Kurdish Peoples’ Democratic Party (HDP), but Prime Minister Binali Yildirim said later in the day the HDP was welcome to come on board in a joint parliamentary effort, agreed to with the CHP and the MHP, for several constitutional amendments.

On July 27, Erdogan moved to crown his efforts at “coup peace” with the opposition, withdrawing all libel cases against Kilicdaroglu and Bahceli. Soon he went even further, dropping all lawsuits against hundreds of people accused of “insulting” him.

Finally, the Justice and Development Party (AKP) hung a giant portrait of Mustafa Kemal Ataturk on the facade of its headquarters in Ankara, which left many stunned, given the Turkish Islamists’ aversion for the man who abolished the caliphate and founded modern Turkey as a secular republic. Only a few months ago, AKP heavyweights were calling for removing the tenet of secularism from the constitution.

So, what is behind Erdogan’s sudden peace-making drive? Understanding his motives is crucial for correct reading of developments in Turkey in the wake of the failed coup. Over the past 14 years, Erdogan has steadily opted for polarization as a means to consolidate power, so why does he need “national unity” now? Is this meant as a form of societal and political deterrence against a possible second putsch? This possibility, however, is gone with the massive purges in the military and other security branches of the state. Hence, his motives must be rooted abroad rather than at home.

To start with, let’s see how the world reacted to the coup attempt. Generally speaking, the United States and Europe saw it as a move directed primarily at Erdogan. Both the scope and tone of their reactions was just the minimum of what diplomatic etiquette requires. The Western media focused less on the putsch itself and more on Erdogan’s crackdown on the putschists, using a highly apprehensive language in reporting the measures. The solidarity expressed by the Arab and Muslim world also fell short of the vibrant, impassionate support that Erdogan must have expected.

But not only that. Starting on July 16, Erdogan and his aides were all eyes and ears for signals from the United States, the world’s only power at which Erdogan would flinch, barring perhaps Russia since the plane crisis last year. And what Erdogan saw across the Atlantic must have been very alarming. Whether his July 19 phone call with President Barack Obama bore on his anxiety is unknown, but Ankara clearly perceived a threat from the United States. Its bluntest expression came in a headline in the staunchly pro-government Yeni Safak, which trumpeted, "The United States tried to kill Erdogan!"

Justice Minister Bekir Bozdag would later say he was sure “Obama knows the coup was the work of Fethullah Gulen as much as he knows his own name,” but a perception of threat was discernible in these remarks as well. Gulen has been in self-exile in Pennsylvania since 1999, and his extradition is a demand Ankara raised immediately after the botched coup.

In sum, Erdogan embarked on peace-making at home upon concluding he was facing a threat from outside. For him, the failed coup is no longer a domestic but an international issue. It has opened his eyes to how isolated he has become internationally, as evidenced in a sentence he uttered July 23: “If I had died [in the coup], our Western friends were ready to jump for joy.”

Having pinned the United States at the origin of the threat, Erdogan quickly realized he cannot face the challenge with the AKP and his supporters alone, and moved fast to reposition himself in line with this sudden loss of power. The cooperation ground he seeks with the opposition by engaging it along the narrative of “defending democracy against coups” is in fact an effort to stand against that external threat. His trip to Russia for talks with President Vladimir Putin, scheduled for Aug. 9, is a product of the same effort.

Yet one should have no illusions that the failed coup has changed Erdogan in a positive way. He is merely in a forced retreat, with a view of compensating for it later. To speak of any new hope for Turkish democracy is still premature.