Will KRG be next target of Turkey's Gulenist purge?

Though the Gulen movement has long been a major player in education, business and public facilities in Iraqi Kurdistan, observers doubt that the Turkish government will let its influence hinder relations between the two important trading partners. 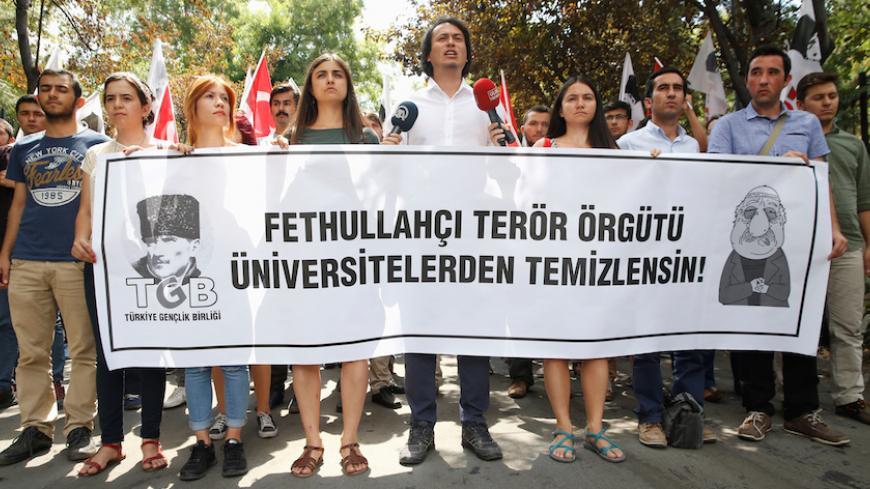 Members of the ultranationalist Turkish Youth Association take part in a protest against academics close to US-based cleric Fethullah Gulen in front of Ankara University in Ankara, July 21, 2016. The banner reads "Universities should be cleansed from Fethullah's terrorist organization." - REUTERS/Baz Ratner

DIYARBAKIR, Turkey — Since the July 15 coup attempt, Turkey has been busy seizing assets of the suspected instigators, members of the Fethullah Gulen movement. When that task is done, Turkey may then turn to Gulenist assets abroad. There are many who believe Turkey will target Gulenist activities and assets next door in Iraqi Kurdistan.

Yet the large presence of Gulenists there won't necessarily disrupt relations between Turkey and the Kurdistan Regional Government (KRG). Despite tensions between the two, Turkey remains a significant trading partner for the KRG.

In 1991, during the last days of the Gulf War, the United Nations Security Council declared a no-fly zone that left northern Iraq under Kurdish rule.

This was the onset of a new era. Although its status was undetermined, the region drew worldwide attention. Among those first interested was the Gulen movement, which was just making a name for itself in Turkey and the world. While the Kurds were just taking their first steps to control the region, the Gulen movement initiated assistance missions.

Jabbar Kadir, once an adviser to former KRG Prime Minister Barham Salih, thinks that the Gulenists used relief activities to enter the region. Other concrete Gulenist moves followed. The movement opened its first schools in the region in 1994.

After 2004, when Iraq adopted its first post-Saddam Hussein constitution, the KRG achieved its autonomous status. The Gulen movement stepped up its presence in the region by opening more schools, media organizations and commercial companies. By 2010, its presence in the KRG had peaked. The Kurdish capital of Erbil and the cities of Sulaimaniyah and Dahuk became centers of Gulenist operations. In addition to their commercial activities, Gulenists were paying particular attention to educational projects.

Companies with ties to the movement were awarded contracts to build ministerial compounds. They made a lot of money building shopping centers, hotels and schools. By 2016, Gulenists had 18 primary, middle and high schools and two universities in operation. People affiliated with the movement were also running hospitals, one radio station and an advertising agency.

Today, some 9,500 students are studying in primary, middle and high schools run by the movement, in addition to some 3,000 students in its universities. The children of many senior KRG officials and well-to-do families attend these institutions. Some observers interpreted the privileges granted to children of influential KRG officials as a scheme to penetrate the Kurdish administration.

There were reports that Gulenist school administrators were encouraging their graduates to seek employment in Asayis, the intelligence and law enforcement body of the KRG. Both the schools and the KRG have denied these allegations.

Aydin Selcen, who was the first Turkish consul to the KRG, said the movement had analyzed the conditions of the time when deciding to penetrate the region. “Our common borders, [as well as the] rather desperate status of the Iraqi Kurds in all fields, allowed the movement to assess the time as conducive to its assimilation and missionary operations,” Selcan wrote, answering Al-Monitor’s questions via email.

However, Selcen said he does not think the movement has reached the KRG administration and doesn’t believe Gulenist activities will cause friction between Turkey and the KRG.

“Gulenists did not infiltrate the KRG government or its leadership. But when I served there in 2010-2013, I knew that most notable families were sending their children to Gulen schools,” he said. “Today, Azerbaijani President Ilham Aliyev, one of two neighboring leaders Turkey has the best relations with, instantly reacted positively to Ankara’s request to close down the Gulen schools. KRG Prime Minister Nechirvan Barzani cannot do the same — not because of political reasons, but because of local realities. I know that the movement’s presence in the KRG is strictly supervised by [Barzani] and is restricted to educational and health services. Given the multidimensional [nature] of Ankara-Erbil relations, I don’t think there will be any friction between them.”

Kadir said the true goal of Gulen activities that started with relief work and continued with education is certainly political.

“At the beginning, educational institutions were charging minimal fees. But when their reputation grew, people started to prefer those schools despite higher fees. Their initial slogan was ‘assisting our brothers in northern Iraq.’ It was only later we learned that their real goal was political. I spoke with my friends who sent their children to Gulen schools, and they tell me that within a year their children [became] like foreigners,” Kadir told Al-Monitor.

“This is their biggest success. They introduced Turkish Islamic culture. Most of their university graduates are working in state bodies. Some are taken to Turkey for further studies. Those who work with them here have to agree with their culture, traditions and norms. This is how they can become a voice in Kurdistan politics.”

Will the presence of the movement have negative implications for Turkish-KRG relations? Like Selcen, Kadir doesn’t think so.

Kadir said, “If Turkey comes with a serious request, the Kurdish government cannot refuse it, especially in [Barzani's] Kurdistan Democratic Party area. I wouldn’t know about the Patriotic Union of Kurdistan areas. They are mostly in the KDP area. There are 12,000-13,000 students in those schools, mostly children of senior officials and rich families. If they are under serious pressure, Gulenist officials will lower their profiles, the KDP will appoint [its] own people in their places and announce that they have made them Kurdish institutions. But that won’t be a real change."

He added, "I don’t anticipate a crisis with Turkey. The KDP and the KRG governments cannot take a stand against Turkey and [the ruling Justice and Development Party] because of economic realities. They won’t risk their economic interests for the sake of the Gulen movement."

Kadir doesn’t think the movement can influence the regional government. “A foreign movement cannot penetrate a body that is controlled by local political parties and tribes. They can buy a few names, but they cannot penetrate it. Anyhow, I don’t think Gulenists are interested in replicating what they did in Turkey in Kurdistan,” he said.

Aware of Turkey’s sensitivity to Gulenist activities, KRG spokesman Sefin Diyazi said the schools will be put under the direction of the Ministry of Education. He said, however, those schools may also be turned over to the private sector.

Dizayi said this move illustrates the importance the KRG attaches to good relations with Turkey. He noted the KRG did not wait for an official request from Turkey about these schools. “We are always careful with our relations with Turkey,” he said. "We have been following the developments since July 15 closely. Instability in Turkey can affect the entire region.”