Why are Turks disposing of $1 bills?

The discovery of $1 bills on Turkish soldiers involved in the July 15 putsch suggest the greenback has been used as a secret code of communication. 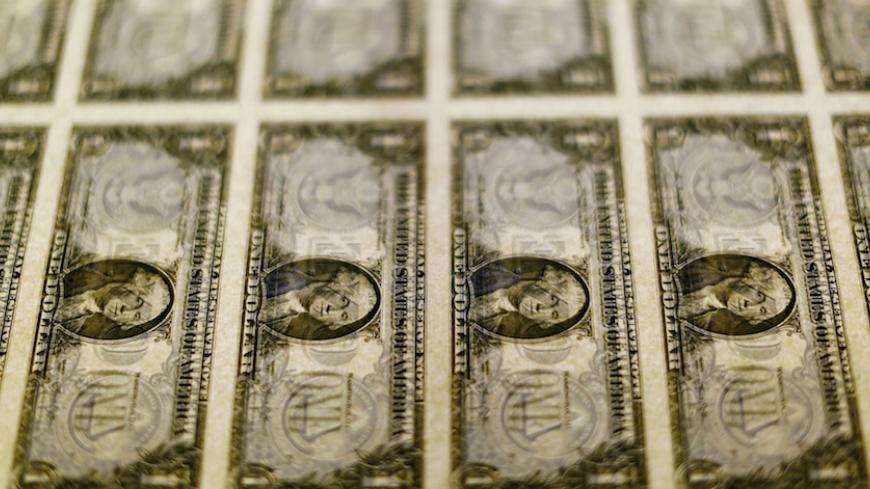 US $1 bills are seen on a light table at the Bureau of Engraving and Printing in Washington, DC, Nov. 14, 2014. - REUTERS/Gary Cameron

What is $1 worth around the world? An unlimited rice meal in India, a cup of coffee in Portugal and an hour of street parking in some places in the United States. A bottle of cheap wine is what you get in Italy, a lottery ticket in Australia and half an hour of foot massage in the Philippines. In Turkey, you can treat yourself to a simit and tea — and, as it turns out, you can stage a coup.

One-dollar bills have been found on high-ranking officers involved in the July 15 coup attempt, in what is perhaps the most bizarre of the many oddities to emerge from the massive crackdown on the Gulen community, the accused culprit in the putsch. The $1 bills have been found also on policemen, judges, academics, businessmen, teachers and other civilians linked to the Gulen community, the government’s former ally, which it now calls the Fethullah Gulen Terror Organization (FETO).

The bills are said to denote membership in the secretive group, and their serial numbers are believed to have coded meanings. Justice Minister Bekir Bozdag has said the $1 bill “is undoubtedly of some important function within FETO,” while Prime Minister Binali Yildirim has vowed to defeat “the lowlifes who sell their souls for $1.”

Ordinary Turks are also angry, protesting the dollar in various ways. In Istanbul, for instance, a group of shopkeepers threw $1 bills in the sewage, pledging not to deal with dollars again. In the most prevalent reaction, however, the greenback is now banished from wedding parties, where the bride and the groom as well as the musicians entertaining the guests are often sprayed with banknotes. Two days before the coup attempt, for instance, a wedding in Sanliurfa made the headlines for the “shower of dollars” that hailed down on the newlyweds. But, as the media report, “Weddings have ushered in a Turkish lira-era” after July 15.

Spraying dollars at wedding parties may convey an air of affluence and largesse, but it is actually a cost-cutting measure devised by crafty Turks. One dollar is worth roughly 3 Turkish lira, while the smallest Turkish banknote is 5 liras — more expensive while at the same time less cool than the greenback. So, to make a real impression with Turkish currency, one has to be prepared to sacrifice banknotes of at least 10 or 20 Turkish lira.

Others prefer to sacrifice probity instead, using fake $1 bills to reduce further the cost of showing off. This seems to have become a widespread practice, judging by a report from the western town of Nazilli, just a day before the coup attempt. A group of wedding musicians felt so exasperated and humiliated by the rising trend that they called a press conference to display — and then burn — the fake dollars they had been thrown at recent parties, which totaled $5,000 in face value. The musicians said fake dollars were being sold openly at city bazaars and urged police to take action.

Now the main usage area of the $1 bills in Turkey seems to be gone, as no one wants to be associated with the putschists. In currency exchange offices, no one is asking for $1 bills, while those with leftovers from oversea trips are said to be tearing the bills up or throwing them away, with only the bravest turning up for exchange.

One of the exchange offices Al-Monitor visited had accumulated hundreds of $1 bills, with one employee grumbling, “It’s not like before. People are afraid to both buy and sell them.” Another currency dealer said the demand for $1 bills ended “at a stroke” after Gulenists were reported to use them for secret communication. “People have come to see them as criminal tools,” he added. A third shop had done away with the $1 bill altogether. “No $1 bills here,” the dealer said. “Neither buying nor selling.”

Yet, not all $1 bills are of an “incriminating” nature. The serial number matters. According to media reports, a serial number that begins with the letter F denotes that the holder is a top Gulenist leader, while C is for lower-level managers and J for ordinary members. Other reports claim the $1 bills were blessed personally by Fethullah Gulen, the US-based cleric heading the sect, before being distributed to members, and that the serial numbers serve as a sort of ID number, the records of which Gulen keeps at his mansion in Pennsylvania.

Meanwhile, others who disposed of the greenback after the putsch did so not out of fear but to make profits. The Turkish currency plunged sharply over the coup attempt, leading many to sell their dollars to buy more of the cheapened lira before it recovered.

Yildirim and President Recep Tayyip Erdogan, for their part, have praised the sell-off as a display of patriotism, a vantage point that meshes with a widespread conviction among Turks that the United States colluded with the putschists.

In an Aug. 9 speech in parliament, Yildirim said Turks had exchanged $11 billion in 10 days, which helped to fend off a potential crisis at the markets amid fears of an exodus by panicked foreign investors. “The people not only averted the coup but also funneled money to the markets. A nation like this can only be applauded. By converting $11 billion to Turkish lira in the 10 days after the coup, you gave [the country] lifeblood and strength,” Yildirim said.

So the prime minister seems confident that Turks have grown more loyal to their national currency, atop banishing the $1 bill. This should be great news for the wedding bands in particular. The musicians in Nazilli could have never imagined their protest would bear fruit so soon.