Will Gaza photographer ever accept international awards in person?

Palestinian photographer Ashraf Amra has won another international photojournalism prize but may miss the Moscow award ceremony for the second year in a row, unable to leave the Gaza Strip. 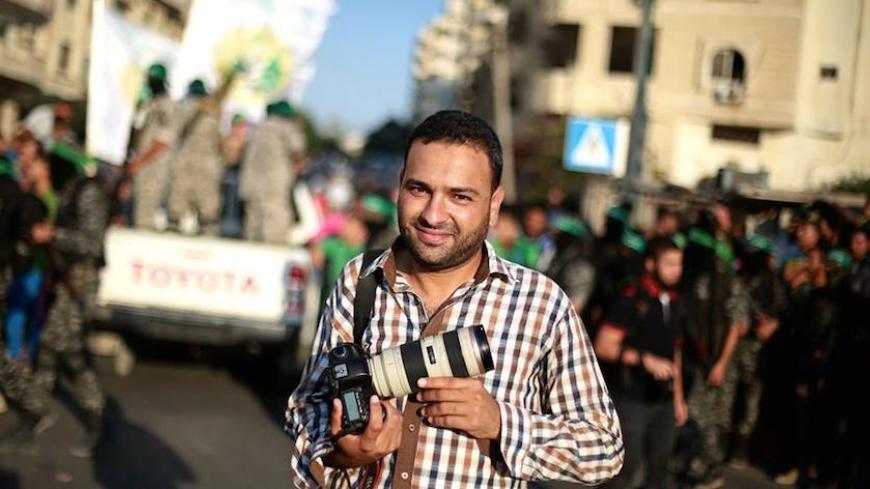 Palestinian photographer Ashraf Amra is pictured in the Gaza Strip in this image taken on Sept. 6, 2015. - Ashraf Amra

GAZA CITY, Gaza Strip — Palestinian photojournalist Ashraf Amra is pleading with international human rights organizations, Palestinian President Mahmoud Abbas and the Palestinian Journalists Syndicate to be allowed to travel from the Gaza Strip to Moscow to receive a journalism award.

Amra, a resident of the Deir el-Balah refugee camp in the central Gaza Strip, won second place in the Top News category in the Andrei Stenin International Photo Contest on Aug. 4. The contest was organized by the Rossiya Segodnya International Information Agency under the auspices of the UNESCO commission of the Russian Federation. More than 7,000 photographers from 71 countries participated.

Amra's career in photojournalism started in 2002. He worked with several local news websites and was a reporter for several local radio stations. He also worked as a freelance photographer selling photos to such international news agencies as Reuters and AFP. He is now a photographer for APA images, an independent Palestinian photojournalism agency.

He told Al-Monitor, “I have tried to travel to Moscow to receive my award at the award ceremony scheduled to be held on Aug. 30, but so far I am unable to travel due to the tight closure policy imposed on the Gaza Strip by Egypt and Israel. I am afraid I will not be able to receive my award and will be denied the opportunity to represent my country in this prestigious ceremony.”

The Egyptian authorities have maintained an almost complete closure of the Rafah crossing on the eastern borders of the Sinai Peninsula since July 2013. In consideration for the tense security situation in Sinai, the crossing is opened sporadically for a few days at a time for humanitarian cases only. Egypt claims that it is keeping the crossing closed to prevent armed jihadists from crossing over from Gaza, though Hamas has denied this danger on more than one occasion. According to statistics published by Gaza's Interior Ministry in December 2015, the Egyptian authorities opened the Rafah crossing for only 21 days during 2015.

As for the Israel-controlled Erez crossing, Gisha, the Israeli Legal Center for Freedom of Movement, indicated, "Since March 2006, Israeli policy has been to deny Gaza residents passage except for certain humanitarian cases and prominent businessmen, who were allowed entry with Israeli facilitation."

The photo that won Amra second place shows the body of Rahaf Hassan, a 2-year-old child killed by an Israeli airstrike that hit her house in the Zeitoun neighborhood east of Gaza city on Oct. 11, 2015. The airstrike also killed the child’s mother Noor Hassan, who was five months pregnant. Amra’s photo shows the father, Yehya Hassan, hugging his child’s dead body in his arms at her funeral.

Amra said, “It is a photo that wonderfully represents a humanitarian issue. It portrays the cruelty of the Israeli occupation that targets houses inhabited by civilians and children. This photo describes the recurring tragedy experienced by the residents of the Gaza Strip during the previous Israeli wars.”

He noted that his photo is different from dozens of others of the same scene, because of his choice of angle that highlighted the sadness of the father as he summoned the strength to bid his child a final farewell.

This is not the first time that Amra has tried to leave Gaza to receive a journalism award. The photojournalist had won third place in the same contest in 2015 in the Everyday Life category, but was unable to leave the Gaza Strip then as well.

Amra was able to accept the Palestinian Press House 2015 free media award for best photo at a ceremony in the Gaza Strip.

Amra, who has covered three Israeli wars on Gaza, noted that Palestinian photographers have good chances of winning international competitions because of the continuing Israeli-Palestinian conflict, the continued Israeli occupation and the blockade on Gaza ongoing since 2007, as the ongoing misery and suffering of the people in Gaza continue to draw the world’s attention. However, he explained, the blockade endangers journalists in Gaza, since Israel has banned the entry of safety and security equipment such as helmets and shields for journalists, putting their lives at risk.

Amra himself has sustained several injuries during his career, including a foot injury during the 2012 war. He was hurt when Israeli planes bombed al-Shawa media tower in central Gaza city, where a number of media offices are located.

On Oct. 21, 2015, Amra was covering the funeral of Palestinian citizen Ahmed al-Sarhi, who was killed by Israeli fire in Deir el-Balah. Amra took a stray bullet to his hand.

Amra said, “In October 2015, I requested that Israel allow me to travel through the Erez crossing to receive medical treatment outside the Gaza Strip, but my request was denied without any justification." He added, “Israel denies us the right to travel, fearing we will exercise our role as journalists and talk to other people about our suffering.”

He hopes that Abbas will hear his appeal and that international human rights organizations will fill their duty in pressuring Israel to allow him to travel to Moscow to receive his award. “I hope all Palestinians will be allowed to travel without being subject to any conditions and obstacles,” he said.