Palestinian photographers reach world-class status for depicting the daily lives of Gazans and the beauty of Gaza’s nature, unlike the often-seen images of destruction. 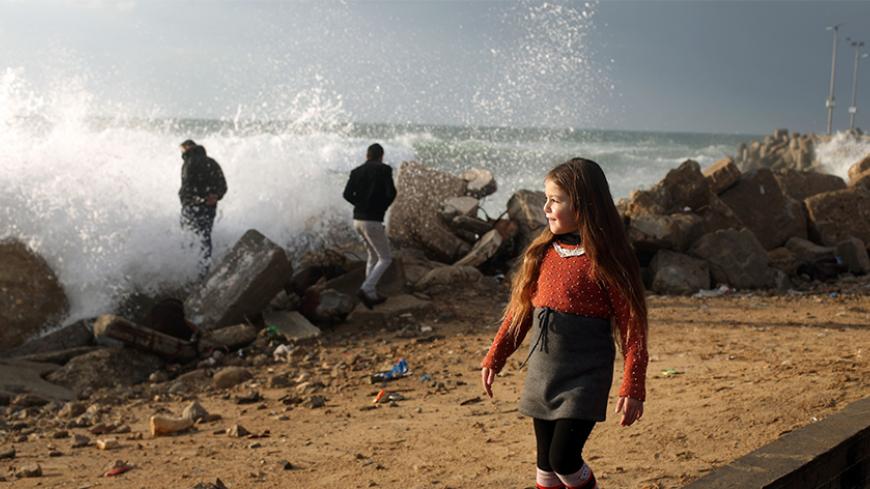 Photojournalist Mohammed al-Baba displays a Palestinian girl walking by the beach on the last day of the year at the seaport in Gaza City, Dec. 31, 2015. - MOHAMMED ABED/AFP/Getty Images

GAZA CITY, Gaza Strip — Award-winning photojournalist Mohammed al-Baba once again is receiving international accolades, being named one of The Guardian's top 10 photographers for 2015. The Guardian recognized Baba, a cameraman for Agence France-Presse, for his work documenting the daily lives of citizens following Israel's war on Gaza in 2014. He has received 14 international awards over the last 15 years.​

Baba told Al-Monitor, “It is important for photographers to capture human aspects. Once the news is covered, photographers ought to dive into the aftermath of the event. The humane message that I conveyed through the pictures I took was about the way citizens in the Gaza Strip carry on with their daily lives and mix life with death even after their houses are destroyed.

"For example, I took pictures of people working near destroyed houses. I took pictures of children smiling in refugee camps in Gaza and a fisherman fishing despite the problems surrounding him. All these pictures show the [many] aspects of life.”

Baba believes that Gaza’s photographers have talent and a critical eye for capturing significant events, such as the recurrent wars that take place in the Gaza Strip.

“Palestinian photographers’ natural instincts and fast learning of visual arts qualify them as visual and creative artists,” he said. “These photographers have attended sessions outside Palestine and worked in inflamed regions in Egypt, Syria, Yemen and Iraq, which gave them additional experience in covering wars and conflicts."

Ibrahim Faraj, a cameraman from Gaza, chose to begin his career away from the war environment. He captured aspects that had long remained hidden, such as normal life and poverty in the Gaza Strip.

Faraj works for Alray, the Palestinian government's media agency. He told Al-Monitor he started out by capturing pictures of nature, the sea, green landscapes and other beautiful scenery in the Gaza Strip. Gaza features two aspects of life, Faraj said: a tragic one full of destruction and poverty, and another, wonderful one that combines hope, optimism, happiness and beauty.

“I completed my journey, which started in 2008, by showing the beautiful and simple life in Gaza. Some of my fans support the nature of my photos while others oppose them. I sometimes receive positive feedback that encourages me to carry on, but I also receive negative comments that disregard the content and fail to grasp the idea,” Faraj said.

Despite the nine-year-long Israeli blockade on the Gaza Strip and repeated wars, Faraj was able to capture pictures that highlight Gaza’s magnificence and prove that Gaza is still full of love, beauty and life.

Naaman Eshtewi, a photojournalism professor at the University College of Applied Sciences in the Gaza Strip, told Al-Monitor that the increasing number of photographers in Palestine, the narrow geographical spaces and the repetition of images are factors that prompted a number of photographers to try to find something new, to avoid covering the same events that all photographers rush to cover.

“Therefore, when conditions on the ground calm down and when political stability prevails, some photographers opt for human stories or take aesthetic shots related to the different aspects of people’s lives. These include the beauty of the sea, the citizens’ leisure activities during the summer and stories about horseback riding or rose planting. These are stories that the Arab and international media outlets are also interested in,” Eshtewi said.

He pointed out that professional photographers in the Gaza Strip have provided numerous photos in past years while documenting all political and social aspects of Palestinian life. Hardly a week goes by without their pictures making it to the front page of global newspapers and websites.

“Given their distinction, these photographers won numerous international awards, [competing with] photographers from all over the world, such as Wissam Nassar and Ashraf Abou Amra," Eshtewi said. "I think [this] shows the power, high quality and professionalism of the captured images." He particularly praised "the framing, the lighting and objectivity, not to mention the importance of the location and the significance of the covered event."

With all these achievements, professional photographers of Gaza are proving they can reach global audiences, especially as social media has made it easier for them to transmit their photos. All of these factors are expected to encourage budding photographers to follow suit.