Is Abbas using Christians to keep Hamas from power? 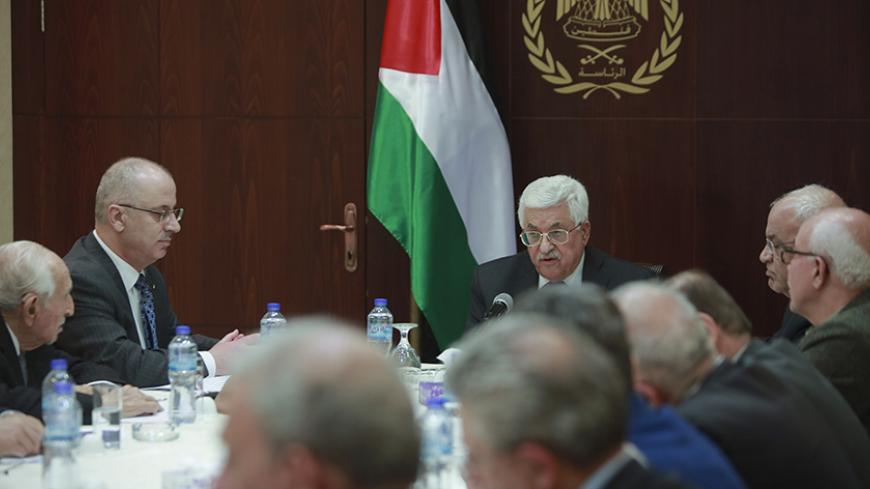 GAZA CITY, Gaza Strip — Palestinian Authority President Mahmoud Abbas issued a decree July 31 increasing the quota for Christians in local governing councils in the provinces of Ramallah and Bethlehem and in a number of villages around the two provinces. The four-article presidential decree listed nine local councils in the West Bank where the new quota allocated to Christians would exceed the quota assigned to Muslims.

Article 1 of the decree specifies that Christians shall have 5-10 seats on the affected local councils, while Muslims will have 2-7 seats. The total number of seats ranges from 9 to 15, according to the province or village. Article 2 asserts that the heads of the nine local councils — which have the largest number of Christians in the Palestinian territories — must be from the Christian community.

The decree stirred controversy among Palestinians, in particular questions about its timing, given that it followed Hamas’ announcement of its intention to take part in the local council elections. In addition, it appeared to violate electoral law concerning the appointment of the heads of local councils. Article 56(3) of law No. 10 of 2005 specifies that the head of the local council shall be elected by an absolute majority of council members, but the decree authorizes the appointment of council heads.

Hamas issued a statement Aug. 2 rejecting Abbas' decree. Yahya Moussa, a Hamas leader and chairman of the Palestinian Legislative Council's Oversight Committee in Gaza, told Al-Monitor, “Abbas was surprised when Hamas announced its participation in the local council elections and issued this decree that aims to reduce Hamas’ representation in the local councils,” he said.

Moussa claimed that the decree is a violation of the Palestinian Basic Law, specifically Article 26(4), which stipulates that Palestinians are entitled to hold public office and positions in accordance with the principle of equal opportunity. “The presidential decree is discriminatory and violates the principle of equal opportunity between Muslims and Christians,” he said.

Moussa added that the decree is also contrary to the principles of democracy, which call for equality and justice, but the decree allocates more seats to a minority compared to the seats allocated to the majority. There are fewer than 50,000 Christians in the Palestinian territories, including 40,000 in the West Bank, compared to more than 2.8 million Muslims in the West Bank.

Moussa stressed that Hamas has no problem with the representation of Christians and recalled that in the parliamentary elections in 2006, Hamas' lists included one Christian figure for every five Muslim candidates in Gaza City.

Members of Fatah, which Abbas heads, have also raised concerns about the new decree. Amin Maqboul, the secretary-general of Fatah's Revolutionary Council, told Al-Monitor, “There are no justifications for Abbas’ issuance of this decree, especially since a previous similar decree was issued in 2010 — which was superseded by the newly issued decree.” Maqboul said that judicial authorities are examining the decree, which has been officially published. The 2010 decree had increased the Christian quota as well. Maqboul also pointed out that Fatah includes Christian figures on its electoral lists in regions where there are not enough Christian residents, such as the city of Nablus, for them to run on a separate Christian list.

Maqboul, however, rejected Hamas’ allegations that the decree is contrary to the law and was issued to influence the electoral process. “It is expected that Hamas would question any decision Abbas issues regarding the elections,” he said.

The Hemaya Center for Human Rights based in Gaza city issued a statement Aug. 2 calling on Abbas to respect the law and rescind Article 2 of the new decree because it is unconstitutional. The center stressed the need to protect the right to equality for all citizens, avoid discrimination between the different communities in terms of access to local council positions and retain elections as the method of appointment for heads of local councils, as stipulated by law.

Hisham Kahil, executive director of the Palestinian Central Election Commission, told Al-Monitor, “Abbas is entitled to issue decrees related to elections before the date set for announcing the candidates and lists.” He said his commission — charged with executing presidential and government decrees and decisions related to elections — is not consulted before decrees are issued.

Kahil explained, “The minister of local government is to be entrusted with appointing the heads of the nine local councils cited in the newly issued decree. The appointments take place after the announcement of the results of the local elections scheduled for Oct. 8 in all the Palestinian governorates. The persons appointed as head of council in these nine governorates or villages must be from among the Christians who win these elections in their respective governorates.”

Mustafa Sawaf, a political analyst and former editor-in-chief of the Hamas-run newspaper Palestine, told Al-Monitor, “This decree sets the foundation for sectarianism in the Palestinian territories, since for Palestinian society there is no difference between a Muslim and a Christian.”

Sawaf further stated, “This move is political interference in the electoral process and has nothing to do with protecting the Christian community, which has been integrated into Palestinian society for hundreds of years.”

According to Sawaf, Palestinians across the spectrum want Christians to be represented, stating, “This decree is intended to prevent Muslims affiliated with Hamas from heading local councils, in case Hamas wins elections, although the movement’s lists in the previous elections included Christian candidates.”

Akram Atallah, political writer and analyst for Al-Ayyam, a Ramallah newspaper, told Al-Monitor that the decree is discriminatory on the basis of religion and noted the absence of religious designations in developed countries' election systems.

Atallah added, “Third World countries are still plagued by sectarian and religious conflicts. We fear that the rights of Christians would be undermined, and this is why we come up with such decrees. The misery and division prevailing in Palestine make things worse. This decree is useless and is limited to Christians in the West Bank, since it includes more Christians than Gaza and the Palestinian Authority does not control Gaza.”

In light of the dwindling number of Christians in the Palestinian territories, some Palestinians believe the controversial decree protects the rights of Christians regardless of whether they are included on electoral lists with Muslims.