Will Netanyahu dare to engage in regional settlement?

According to a New Wave Institute poll, most Israelis support the regional guidelines proposed by the Israeli Initiative group — namely the two-state solution, normalization of economic ties with Arab states and international security guarantees. 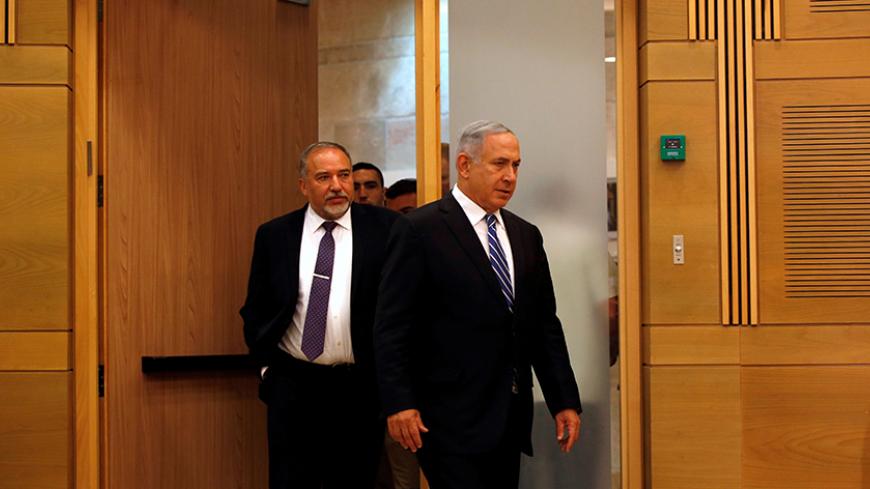 Israeli Defense Minister Avigdor Liberman seems to have a weakness for the fairy tales of Hans Christian Andersen, especially for “The Emperor’s New Clothes.” He never misses an opportunity to shout at the top of his lungs that the emperor, Prime Minister Benjamin Netanyahu, is not wearing any clothes. In the days when he wore the foreign minister’s suit, Liberman presented to the United Nations General Assembly the two-state vision, in the spirit of Netanyahu's 2009 Bar-Ilan speech, as a transparent cover for a bare policy, in more ways than one.

Donned with the Defense Ministry uniform now, on Aug. 5 Liberman compared the nuclear deal with Iran to the 1938 Munich Agreement with Hitler — thus coercing Netanyahu to once again expose his empty relationship with US President Barack Obama. Dissociating himself from Liberman's provocation, Netanyahu released a statement the same day declaring, “Israel’s position on the deal with Iran remains unchanged.” This position, however, is very similar to the one Liberman presented in his Defense Ministry statement.

Before the nuclear deal was concluded, Netanyahu was careful not to explicitly mention Hitler and Munich, but he did speak about a "stunning historic mistake," and the willingness of the powers to cut a deal at any price.

By the way, Liberman's stance on the nuke agreement isn't new either. In a statement he issued on the website of his Yisrael Beitenu party in July 2015, he claimed the deal would go down in history alongside the Munich Agreement as "a dark day for the free world." The only change that has taken place since, has been Liberman moving from the opposition benches to the Cabinet table.

It is puzzling how people who do not hesitate to challenge the most powerful man in the world (Obama) are afraid of advancing peace. Netanyahu has spoken out in favor of the Arab Peace Initiative in recent months, in the spirit of the message conveyed by Egyptian President Abdel Fattah al-Sisi. In a joint press conference with Liberman on May 30, marking his joining the government, Netanyahu said, "The Arab Peace Initiative includes positive elements that can help revive constructive negotiations with the Palestinians." He expressed willingness to negotiate with Arab countries in order to update the initiative and adapt it to the new regional reality.

Liberman’s position on the Arab Peace Initiative has also undergone a welcome change. In April 2009, Foreign Minister Liberman defined the 2002 Arab Peace Initiative as so “dangerous” that it constitutes a “surefire recipe for Israel’s destruction.” On the other hand, in the summer of 2014, that same foreign minister said in a Jerusalem Post interview that the initiative was “far more relevant today.” He explained that a separate agreement with the Palestinians would only be a “headache” for Israel, whereas a regional agreement holds out many advantages for Israel.

A public opinion survey on this issue conducted in June 2016 among a representative random sampling of 500 Hebrew-speaking Jewish Israelis found that 84% of those surveyed support or “could live with” the regional arrangement blueprint proposed by the Israeli Initiative group. The group — which counts among its leaders Yuval Rabin, the son of late Prime Minister Yitzhak Rabin; Knesset member Yaakov Peri (Yesh Atid), the former head of the Mossad; Danny Yatom; and Kobi Huberman — has been active since 2011 in propagating the regional concept among the public and Israeli and international decision-makers.

The blueprint includes the establishment of a demilitarized Palestinian state based on the 1967 border lines and land exchanges allowing 80% of the Jewish West Bank settlers to live under Israeli sovereignty. It excludes a sweeping return of all Palestinian refugees to the State of Israel. It espouses an arrangement that hands the Arab neighborhoods of Jerusalem over to Palestinian sovereignty and places the city’s holy sites under international management; removal of the boycott threat against Israel; creation of a regional defense mechanism to combat the Iranian threat and terrorism; economic normalization of ties with the Arab states; and international and Arab guarantees of the agreement’s implementation.

The study conducted by the New Wave Institute, published online for the first time by Al-Monitor, indicates that support for this plan crosses party lines: 97% of left-wing voters support it or “could live with it”; the same goes for 94% of centrist voters and 77% of right-wing voters. This trend also crosses religious divides: 91% of secular Israelis support it or "could live with it," as do 88% of those defining themselves as “traditional” Jews, 54% of religious Jews and 67% of ultra-Orthodox Jews. The percentage of those supporting regional negotiations is identical to those espousing direct negotiations between Israel and the Palestinians: namely 28% each.

The problem is that only a small minority among the respondents (36%) know the Arab Peace Initiative, which has been awaiting an Israeli response for more than 14 years. Among those who said they were aware of its existence, 52% said that they “don’t know any” or that they “don’t exactly know” details of the initiative. They expressed their views about a regional arrangement after first hearing of the very existence of the initiative or of its components. This egregious diplomatic failure must be laid at the door of Israel’s right and the international community; the plan’s marketing failure is the sole responsibility of the Israeli peace camp.

The survey finds that if Netanyahu decides to go for a comprehensive arrangement of this kind, most Israelis (60%) would line up behind him. A similar percentage support a two-state solution, compared with no more than 8% who prefer a one-state solution. Yet if Israeli leadership continues to hesitate, the sovereign Israel, now controlling the area between the Mediterranean Sea and the Jordan River, will transform into a one binational state, or an apartheid regime. Israel might have the tools to deal with the Iranian nuclear deal, even if it resembles the Munich Agreement, but Israel cannot rule forever millions of people while preserving its Jewish and its democratic characters.