With the Israeli occupation of the West Bank nearing its 50th year, Israel's peace camp is pushing the idea of a referendum over its future. 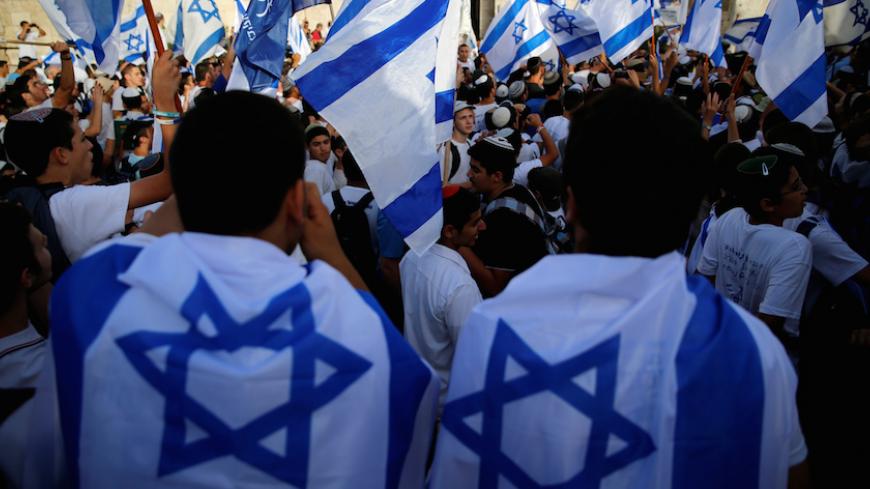 Next year, Israel will mark the 50th anniversary of the Six-Day War, which broke out in June 1967. It was the war that transformed Israel from a tiny, precarious and besieged state into a regional empire. The left and the right will each try to define the event in a way that aligns with their conflicting ideologies. For the left, including Israel’s dwindling peace camp, the event marks 50 years of occupation, and the right will celebrate 50 years since the reunification of Jerusalem. The two sides will be locked in a struggle over the memory, the narrative and the national agenda.

The left is coming at this from the position of the irrelevant underdog that lost the public's support and is trying to reinvent itself. The right, which has dominated Israel for the past few decades, will try to brand this historic anniversary from the most popular perspective, highlighting the consensus on Jerusalem in order to obscure the reality on the ground.

The opening salvo will come from the left, as early as September. A new organization called “Deciding at 50” is set to launch a digital campaign that includes a proposal for a referendum on the future of the territories occupied by Israel in the Six-Day War.

The first person to give voice to this idea was Tzali Reshef, a veteran member of the Israeli peace camp and one of the historic Peace Now movement leaders. Labor Knesset member Eitan Broshi is providing the political momentum behind him. Others who joined are some of the fewer and fewer prominent Israelis who still support a diplomatic arrangement — including attorney Gilead Sher, the chief of staff of former Prime Minister Ehud Barak and a prominent peace activist, and businessman and philanthropist Orni Petrushka, Sher’s partner in the “Blue White Future” movement. There is also former Shin Bet Director Ami Ayalon, another prominent peace activist. Former Labor Party head Amram Mitzna and Knesset member Tzipi Livni, Isaac Herzog’s partner in the leadership of the Zionist Camp, are also considered fervent supporters of the initiative.

The new, special association was founded to advance this initiative is now in its final preparations before the September launch.

The initial idea was to demand a referendum on the dilemma surrounding a two-state solution. Over the past few years, support for this idea has declined consistently on both sides of the divide. While recent polls show that there is still a majority among both the Israeli and the Palestinian populations that considers a two-state solution a necessity, the number of supporters for this idea has declined so far that this majority might well disappear. The new initiative wants to challenge the public to reconsider this critical question. Is the public for or against a diplomatic solution to the conflict that includes the establishment of a demilitarized Palestinian state alongside the State of Israel? At some point, the vague issue of a two-state solution was replaced with a more focused and volatile question about the future of "the territories."

What "the territories" actually means is Judea and Samaria. Israel evacuated the Gaza Strip over a decade ago, while given the current situation, the Golan Heights are not up for discussion.

The group also decided to distance overtly leftist organizations such as Peace Now from the forefront of the initiative, so as not to alienate large swaths of the population and foment opposition among the Israeli center and right. At the same time, there have been efforts to include groups from Israel’s political center. One of the people behind the idea told Al-Monitor on condition of anonymity, “It is time to start talking about the elephant in the room. Israelis are in denial of what is actually happening in the territories and what it does to Israel as a nation and a society. We want to put this discussion back on the agenda.”

The most surprising thing is that the left has embraced this initiative, even though the concept of a referendum generally tends to be advocated by the right. Until now, the left has opposed initiatives and legislation that required a referendum before any territorial concession by Israel. Given the current diplomatic deadlock, sources on the left have decided to embrace this tool as a vital means of breathing new life into the Israeli-Palestinian conflict, putting it back on center stage.

In a conversation with Al-Monitor, Broshi was more specific: “It is impossible to hide from this question or obfuscate it. Our goal is to present it to the public and to stare reality right in the eye. Ultimately, everything starts and finishes with what happens between us and the Palestinians in Judea and Samaria. The public realizes that, but there are various groups and individuals who are attempting to keep this issue off the agenda. As someone who believes that there is no alternative to a two-state solution, I believe that a referendum on the fate of the territories could restart the game and challenge Israel’s current leadership. We mustn’t waste any more time or believe that it will all work out in the end."

The people behind the initiative hope that in the end, legislation calling for a referendum on the future of the territories will be submitted to the Knesset. At the same time, they are also aware that such legislation has a slim chance of approval. “If the government wants to remove it from the agenda, it will be removed from the agenda,” one supporter admits. “On the other hand, it will be impossible to avoid a public debate about it.”

There are other scenarios. The “dream scenario” is that groups on the right will support the idea and join the effort. “Even on the right,” one of the initiators said on condition of anonymity, “there are people such as [HaBayit HaYehudi chair] Naftali Bennett who think that it is time to make this difficult decision and stop sidelining the situation. We would be glad to see that happen, because it's time that the Israeli public confronts the real choice of two alternatives.”

The chances of this actually happening are slim. Even among the left, people are not deluding themselves about the current mood among the Israeli public. Prime Minister Benjamin Netanyahu has entirely succeeded in removing the issue of Palestinian statehood from the agenda, without paying a real price for it in the international arena. The "individual intifada" that shook up the country over the past year is now dying down. Given the slaughter in Syria and the overall regional turmoil, the international community has lost interest in what is happening between Israel and the Palestinians. In this state of affairs, all that the Israeli left can hope for is to rekindle the debate.