Israelis, Palestinians prepare for next US president

While the Palestinians prepare different strategies depending on the candidate who wins the US election, the Israelis plan to stick with the same approach in either case. 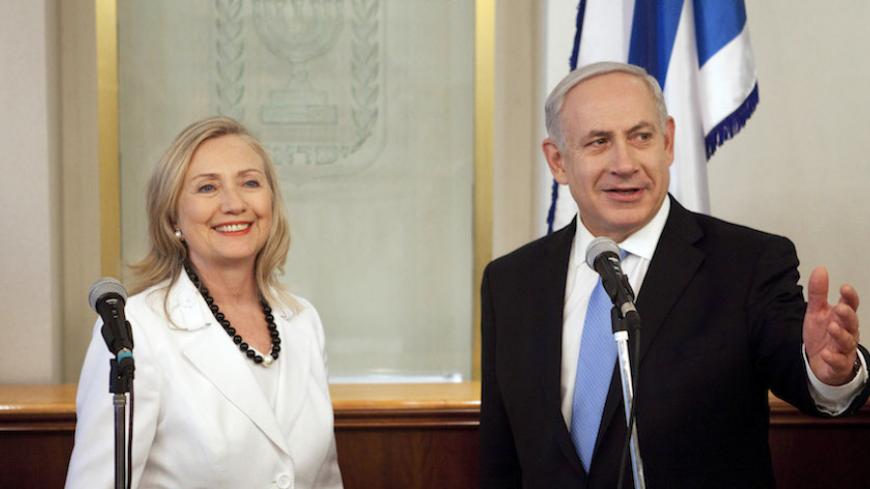 The Palestinian leadership is looking with much anxiety toward 2017. The year is perceived as a time when the patience of its people regarding statehood will run out. It will be 50 years of the occupation, with no end in sight. Internationally, it will be a year dominated by a transition toward a new US administration headed by Hillary Clinton or Donald Trump. Palestinian US experts are giving thought as to how to interact with Washington in the two possible scenarios.

An official in the entourage of PLO Executive Secretary Saeb Erekat told Al-Monitor on condition of anonymity that the Palestinian leadership will not agree to restart process talks for a two-state solution, even informally, from any new baseline. “Washington knows our position on all issues, as conveyed to US Secretary of State John Kerry. The PLO will engage in negotiations after a new administration is in place only on the basis of the Arab Peace Initiative, with a settlement freeze and with a prisoner release, as it was related to John Kerry. Whenever a new administration takes over, or whenever there is a new government in Israel, we are asked to start the process anew. That will not be the case this time around.”

In Israel, the opposite is true. A confidant of Prime Minister Benjamin Netanyahu told Al-Monitor on condition of anonymity that the government is looking forward to a new administration, whatever the outcome of the elections, given the poor relationship between President Barack Obama and Netanyahu. The confidant said there is not only a fierce disagreement on policy, but a real ideological divide between the two leaders, given, for instance, Obama’s preference for collective diplomacy and his reluctance to have US troops on the ground in Iraq or directly attack in Syria.

As for the issue of the outcome of the US presidential election, the confidant said Netanyahu is neutral. He respects Democratic nominee Hillary Clinton, though he has had sharp disagreements with her regarding settlement policy. The confidant implied that while Republican nominee Donald Trump is an unknown, Netanyahu is closer ideologically to Trump's party.

On the Palestinian side, there is no hope when it comes to either candidate. Hillary Clinton was not a popular secretary of state in Ramallah, and she was perceived as adopting pro-Israel positions on all permanent status issues. Yet she is well-known by Palestinian President Mahmoud Abbas and his team and so is her potential Middle East team, which will probably include diplomats and experts who worked in the past with President Bill Clinton. Trump is seen in Ramallah as hostile to Palestinians and Muslims. Trump has spoken out against a Palestinian state and in favor of the settlements.

The Palestinian official told Al-Monitor that the Palestinian Authority is envisaging for 2017 two alternative diplomatic strategies.

In case of a Clinton presidency, the PLO negotiation team headed by Erekat will focus on advancing new terms of reference for a two-state solution based on the 2002 Arab Peace Initiative. In the case of Clinton, they believe the EU will have influence on US policymakers.

In case of a Trump administration, the plan is to rely on Saudi Arabia, Egypt and the Arab League to impress on the new administration the critical importance, in terms of US-Arab relations, of Palestinian statehood — especially in the context of the fight against the Islamic State.

The official claimed that 2017 will be devoted to the launching of an aggressive campaign on “50 years of the occupation.” All Palestinian diplomatic delegations around the world have been instructed to launch campaigns vis-a-vis governments and public opinion, encouraging the world to act in order to bring an end to the occupation.

All this should lead in the second half of 2017 to the convening of special UN General Assembly and Security Council meetings dedicated to Palestinian statehood. The official said that “especially given the transition in the US, our aim is to create a global consensus on a Palestinian state on the 1967 lines with East Jerusalem as its capital.” He added with despair that 2017 may very well become a year of an armed intifada.

Asked about all this, an Israeli Foreign Ministry official told Al-Monitor on condition of anonymity that Israel will reject any internationally monitored peace process and all Palestinian preconditions. He expects Israeli policies in 2017 not to change. Both Clinton and Trump have expressed interest in inviting Netanyahu to Washington immediately after taking office. Israel will continue to propose bilateral and unconditional negotiations, and the official believes that 2017 will be another year of missed Palestinian opportunities.

Both officials may be right.