The Italian ambassador to Baghdad official meets with the secretary-general of the League of the Righteous movement, Qais al-Khazali, which reads as clear support for Shiite militias in Iraq. 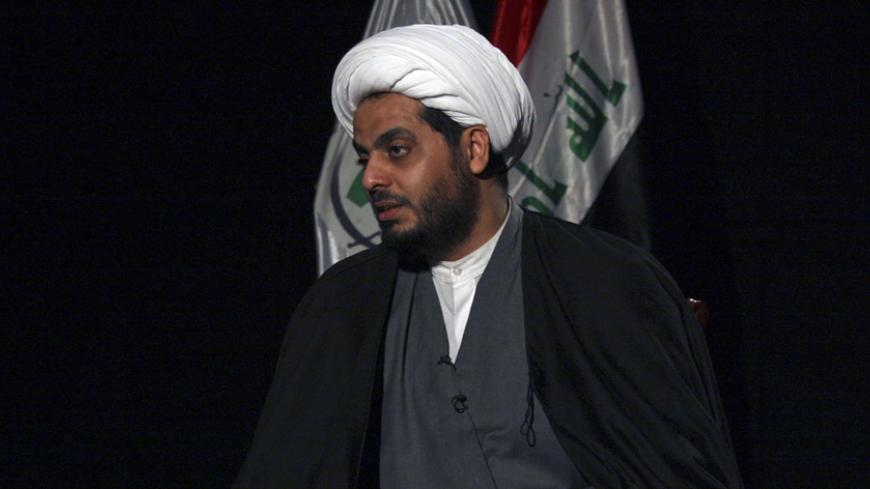 Iraqi Shiite militia leader Qais al-Khazali, the secretary-general of the League of the Righteous, speaks during an interview with Reuters in Baghdad, Jan. 4, 2012. - REUTERS/Kareem Raheem

BAGHDAD — The official website of the League of the Righteous movement (Asaib Ahl al-Haq) reported Aug. 14 a visit by the Italian ambassador to Baghdad, Marco Carnelos, to league Secretary-General Qais al-Khazali. The article stated that Khazali received Carnelos in his office in Baghdad and discussed with him the ongoing preparations for the liberation of the city of Mosul. For his part, Carnelos published a photo of his meeting with Khazali on his embassy Twitter account with the caption “The ambassador acknowledges the significant role of the PMU in fighting IS.”

According to the movement’s website, Carnelos “praised the positions of the Popular Mobilization Units [PMU] and stressed that without the PMU, Iraq would have been in a bad situation.” He emphasized “the unity of the Iraqi territory.”

This is not the first time that Khazali has received an ambassador of an important state. On April 15, he received Russian Ambassador to Baghdad Elijah Morgunov to discuss the latest political developments. However, this was the first official visit paid by a European Union ambassador to a prominent leader of the PMU.

The Iraqi media did not focus on the visit and the points that might have been discussed; it only focused on Carnelos’ tribute to the PMU and the importance of these units taking part in the battle of Mosul. The two parties settled for a brief statement issued by the information league's office.

Italy, which was part of the coalition that overthrew the regime of Iraqi President Saddam Hussein in 2003, is now taking part in the protection of the Mosul Dam; it has deployed its troops there as part of efforts by the US-led international coalition to eliminate the Islamic State (IS).

Also, the war on IS has seen the beefing up of the presence of Italian forces in Iraq. Italian Defense Minister Roberta Pinotti paid a sudden visit to the country May 10 to discuss the deployment of a new batch of Italian forces in Iraq. Italy had deployed 750 soldiers in Iraq before Pinotti’s visit, but this figure increased after 450 more soldiers were deployed to protect the Mosul Dam.

The statement issued by the League of the Righteous movement following the meeting between Khazali and Carnelos on Aug. 14 made no mention of the Italian military presence in Iraq, and whether or not this matter was discussed.

Mahmoud al-Rubaie, the spokesman for the political bureau of the movement, told Al-Monitor, “This is not the first visit by a diplomat from an important country to Khazali, as Russian Ambassador to Baghdad Elijah Morgunov and the representative of the UN secretary-general in Iraq, Jan Kubis, had previously visited Khazali. These visits come within the framework of strengthening Iraq's relations with the countries of the world.”

He said, “We are trying to show and convey a message to the whole world whereby we only carry arms to combat terrorism because we are an Islamic nationalist movement. In this context, the Italian ambassador’s visit to the secretary-general of the League of the Righteous movement confirms our desire to establish positive and strong relations with the countries of the world."

Rubaie added, “This visit came in response to an earlier visit by members of the political bureau of the League of the Righteous movement to the Italian Embassy. This shows that we are a movement that looks for peaceful coexistence, which neither threatens embassies nor companies and does not assault the interests of any country that does not harm Iraq and the Iraqis. The Italian ambassador to Baghdad tackled during the meeting the Italian military presence in northern Iraq and said that the Italian forces in Mosul are defensive. … The Italian ambassador spoke highly of the role of the PMU and stressed the need for all of the parties to cooperate in order to eliminate IS and all kinds of terrorism.”

While Rubaie stated that the meeting came in response to an earlier visit by the political bureau members to the Italian Embassy, Carnelos said, “The date of the meeting was set upon the request of the League of the Righteous. We believe that a serious reconciliation must take place in Iraq and that there should be efforts to convince the actors on the ground to be committed to and promote such reconciliation.”

The PMU troops incorporated into the Iraqi security forces following a governmental decision and therefore declared legitimate by the Iraqi authorities. Also, the PMU was established based on a fatwa from Grand Ayatollah Ali al-Sistani and participated in combatting IS terrorism.

Based on that, Rubaie said, “If this force commits violations, then the government should open an investigation to reveal the truth and prosecute those responsible for the crimes as in a normal democracy.”

The aspects of the meeting that took place between the pro-Iranian League of the Righteous movement leader and the Italian ambassador to Baghdad reveal Western efforts to safeguard Western interests in Iraq in the post-IS period and protect Western troops that would be stationed in Mosul.