Popular Mobilization Units leaders are meeting with Western politicians and diplomats regularly, trying to improve the group's reputation in the West. 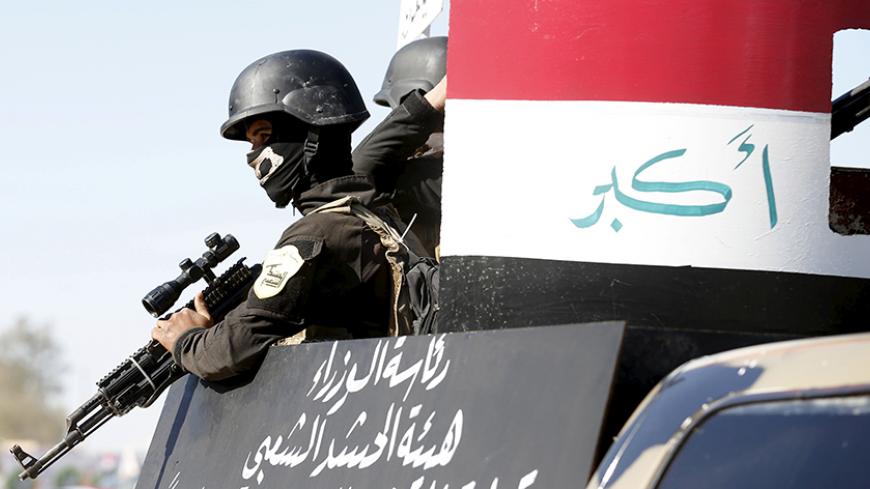 BAGHDAD — Iraq's parliament plans to vote Nov. 26 on a proposal to integrate the militias that operate under the Popular Mobilization Units (PMU). The proposal follows a July 27 order by Prime Minister Haider al-Abadi to make the PMU militias a united governmental force under his direct supervision.

The PMU, a state-sponsored umbrella organization for dozens of mostly Shiite militias, has been lobbying to improve its image in the eyes of the international community by meeting with Western leaders, politicians and diplomats. PMU leaders hope their efforts will help dispel its image as a group of outlawed militias and repair its reputation with the international human rights community. Since its inception in June 2014, the PMU has been accused of human rights violations against civilians in the areas where it has been involved in fighting the Islamic State (IS).

According to Sadr’s website, Sadr and Samonet discussed the humanitarian situation in Iraq and the battle to liberate Mosul, as well as the EU's role in supporting Iraq at the humanitarian level.

Hadi al-Amiri, the secretary-general of the Iraqi Badr Organization, which has a Shiite military wing, has been a busy ambassador recently for the PMU. He also met with Samonet on Oct. 10 to discuss the war against terrorism and the need to provide humanitarian support for the displaced. During the meeting, Samonet said, “The PMU capabilities and victories are no secret to anyone. Iraq does not need any more ground troops, and we believe that PMU participation in the battles is an internal Iraqi matter.”

On Oct. 4, Amiri met with British Ambassador to Baghdad Frank Baker, whom he told, "The PMU obeys the orders of the commander in chief of the armed forces and will participate in the battle to liberate Mosul alongside other security forces and armed factions to eliminate IS there.”

On Sept. 29, the official website of the French Embassy in Baghdad carried the news about a meeting between Amiri and French Ambassador Marc Barety. According to the website, the men discussed the fight against terrorism, preparations for the battle of Mosul and the city's future after liberation with regard to politics and the humanitarian and security situations. The meeting also touched on the time frame of the upcoming Iraqi elections and the security status quo.

In a video posted on YouTube, the Badr Organization quoted Barety as saying, “France supports the unity and sovereignty of Iraq and we are well-aware of the great [war] efforts" made by the PMU.

On Sept. 26, the secretary-general of the League of the Righteous movement, Qais al-Khazali, received Spanish Ambassador to Baghdad Jose Maria Ferre to discuss the PMU's image in the media. Just last year, Khazali was known by some in the West as "Iraq's most fearsome Shia militia leader." The movement’s website said Ferre has promised to address his government regarding the PMU's efforts.

Something that stands out about these meetings, however, is that they did not include the American ambassador or ambassadors of the Arab and Gulf countries that consider the PMU to be a militia affiliated with Iran and say the PMU cannot be part of the Iraqi security institution.

Yet pro-Iraqi government PMU leaders say the meetings demonstrate they have realized the importance of making overtures to the international community, instead of limiting themselves to the political environment of Baghdad and Tehran.

Iraqi Ambassador to Switzerland Majid Abdul Redha has been lobbying in international forums to rebut allegations against the PMU, considering them to be accusations against the security forces of the Iraqi state. On Sept. 21, a PMU delegation headed by Ahmed al-Asadi, a member of parliament and a PMU spokesman, visited the Human Rights Council in Geneva to deny reports about PMU involvement in abuses against civilians.

Asadi told Al-Monitor, “There are some who are seeking to distort the PMU image in the eyes of the international community. Our role now is to relay the true image of the PMU, especially to the West, because we will not allow inaccurate information and reports about our national forces to make the rounds in the media.”

He added, “We are here in Geneva to break this stereotyped image. We have met with Western diplomats and media outlets. We will not stop at this point."

In his Sept. 23 speech during a seminar in one of the Human Rights Council halls in Geneva, Rayan al-Kaldani, a Christian PMU leader, said, “We ask the international community not to comply with the [long-running] Saudi incitement against the PMU, not to harm any of its members and to release our heroes who are detained in Austria. If Europe has failed to pay tribute or honor those who are defending it against IS, the enemy of humanity, it can at least refrain from abusing or mistreating them.”