Environmental deterioration in Iraq has reached a critical point due to a lack of awareness among citizens, the destructive impact of consecutive wars and the absence of effective rehabilitation plans. 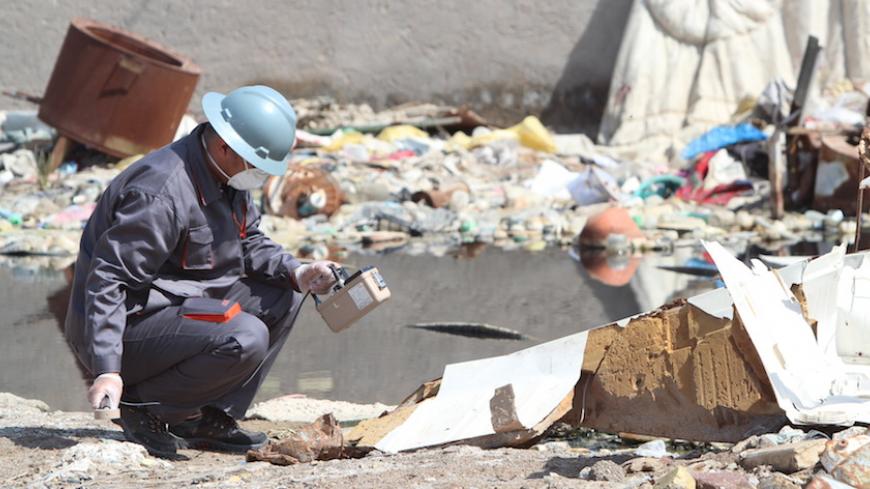 A member of a counter-radiation team uses a Geiger counter to search for missing radioactive material in Basra, Iraq, Feb. 21, 2016. - REUTERS/Essam Al-Sudani

BAGHDAD — Iraq has been involved in many wars, but soon it will have to turn its attention to yet another front or risk being overwhelmed by an environmental crisis.

Two coinciding events recently highlighted the gravity of Iraq's ecological situation. On Aug. 7, Islamic State (IS) militants ran a pipe from the Kiyara refinery to the banks of the Tigris River. After pumping oil into the river, they set it on fire to destroy a military pontoon bridge Iraqi forces built recently as they prepared to reclaim Mosul.

On Aug. 6, Baghdad's city administration announced that the capital produces nearly 11,000 tons of waste every day. The administration said state corruption is hindering any progress toward a solution.

Many factors threaten Iraq's environment, from the irresponsible behavior of some Iraqis who are used to littering rivers and public squares, to the ammunition and equipment remnants from consecutive wars, to the use of radioactive substance in battles.

Another threat, experts say, is the government's negligence and poor execution of projects.

The latter was illustrated when Diyala provincial council's environmental committee revealed in a July 29 press conference that “urban afforestation programs have constantly failed since 2003, as urbanization wiped out 30% of greenbelts.” This is just one example of several failed environmental projects in Iraq.

Urbanization has withered green spaces across Iraq. Unlicensed building in farmlands and forests has eroded the soil of orchards. As a result, sandstorms have intensified, causing sand and dirt to pile up over the roofs of houses and in the streets and aggravating health problems for people with respiratory diseases. Not only that, but sandstorms are being blamed in part for a rise in temperature levels, which now reach 50 degrees Celsius (122 degrees Fahrenheit) during the summer. In a July 29 press statement, Abdullah al-Jabbouri, a member of the parliamentary health and environment committee, urged the government “to come up with an environmental plan to face heatwaves.”

Saleh Abbas, an expert in crop protection at the agricultural directorate in Babil in central Iraq, told Al-Monitor, “The environment in Iraq is victim to the lack of environmental awareness, weak laws and an absence of accountability and government follow-up, which made it easier to abuse natural resources. For instance, the number of palm trees has decreased to a point that raises concern, as housing and industrial projects are being carried out in orchards.”

Other sources of pollution include the piles of rubble and garbage scattered across cities and highways. As an example, Diwaniyah province suffers from a large-scale waste problem, but the provincial council on July 27 held the Finance Ministry responsible for not allocating enough funds to deal with the crisis.

On the highway from Baghdad to Babil, Al-Monitor noticed a number of burned vehicles. The number increases over time because the vehicles are left out in the open and there are no apparent plans to remove them or dispose of them in scrapyards.

After thieves removed its side fences, this vital road turned into a cemetery for wild animals run over by fast-moving cars. In recent years, a burned tanker truck has been sitting about 10 miles from the ruins of Kish city, near the ancient city of Babylon, with no attempts to remove it. Like dozens of other damaged vehicles left out in the open, dogs and wild animals now inhabit this corroded truck.

Military operations carried out intermittently by the Iraqi army against IS since 2003 significantly damaged this highway, which links southern and central Iraq. Bombs have melted the asphalt and destroyed bridges.

During the Iraq-Iran War (1980-1988), military equipment and reinforcements polluted the environment when many large farming and forest areas were used for military purposes. Land mines, cluster bombs and buried bodies still resurface after rainfalls.

Such abuses of nature led Iraqi researcher Souad al-Azzawi to conclude, “The prevalence of cancer and birth defects among Iraqis is a result of increasing pollution levels.”

To back her claims, Azzawi mentioned the systematic incineration of tons of medical waste, some of which contain not only polluting and hazardous substances, but human remains found in the outskirts of Erbil, Kurdistan’s capital. Azzawi has also blamed the presence of depleted uranium for cancer and birth defects in the country.

The merger of the ministries of health and environment a year ago dealt a severe blow to environmental activism. Feeling the imminent threat to their environment, Iraqis created a Facebook page called “The Friends of Nature in Iraq” in a bid to protect the environment.

Ahmad Abd, an environmental studies professor at the University of Al-Qadisiyah, told Al-Monitor in Babil, “The key to finding solutions for the environmental crisis in Iraq lies in taking advantage of the experiences of developed countries in this field by establishing eco-friendly landfill sites, as well as treating and recycling waste using modern technology.”

He added, “Garbage is still piling up in the outskirts of cities, forming large hills. Sometimes the waste is incinerated, resulting in hazardous health effects."

However, local resources are not only available, but critical, agricultural studies professor Amer Habib from the Technical College in al-Mussaib told Al-Monitor.

“Environmental rehabilitation requires the help of local universities and academic experts, especially since most projects are handled by inexperienced and unqualified contractors,” Mussaib said.