Have Egypt-Hamas relations reached point of no return?

Already-tenuous relations between Egypt and Hamas recently worsened with the release of a photo showing two of Hamas’ men who were abducted in Sinai a year ago in an Egyptian cell. 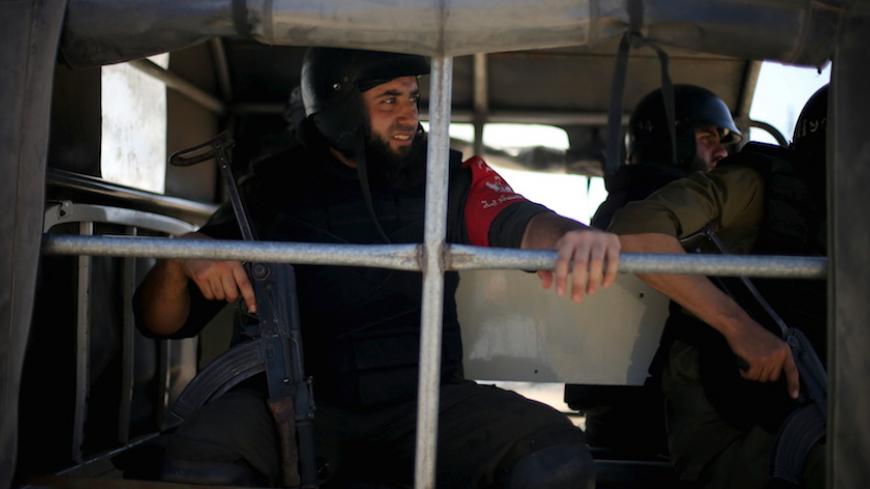 Members of Palestinian security forces loyal to Hamas ride a pickup truck as they are deployed to maintain security on the border of the southern Gaza Strip with Egypt, April 21, 2016. - REUTERS/Ibraheem Abu Mustafa

Hamas-Egypt relations are hanging by a thread amid the instability and tension between them, which some fear could result in a complete severing of ties.

The latest flare ignited Aug. 22 when Al Jazeera broadcast a photo of Hamas members who had been abducted a year ago by unknown armed men in the Sinai Peninsula after passing through the Rafah crossing.

Hamas said the men — Yasser Zanoun, Hussein al-Zabda, Abdullah Abu al-Jabin and Abdel Dayem Abu Labda — were traveling to Turkey to seek medical treatment or to pursue their studies. Egypt claimed the men were members of Hamas' military wing, Izz ad-Din al-Qassam Brigades, and were on their way to Iran for military training.

The photo shows two of the four men locked up, along with many others, at the headquarters of the Egyptian State Security Intelligence. In the photo, all the men were shown in their underwear and seemed to be in a miserable state. Some of them were emaciated.

Al Jazeera would not reveal the source of the photo, although Huffington Post Arabi cited its own anonymous source as saying the photo is a still from prison camera footage that Palestinian leaders obtained a few months ago “through intermediaries.” It appears the photo was leaked to Hamas, which eventually allowed Al Jazeera to publish it, perhaps in an effort to reignite the abduction issue because of pressure from families to get their sons released.

Al Jazeera released the photo just days after dozens of Palestinians participated in an Aug. 18 protest in front of the Red Cross headquarters in Gaza to demand that Egypt reveal the fate of the four men. There has been no word since their abduction. The day before the photo was broadcast, Abu Obeida, spokesman for al-Qassam Brigades, announced the brigades have been following up on the case and making constant efforts to bring the men back.

Mohammad Abu Labda, a member of the Popular Assembly for Solidarity with the Palestinians Kidnapped in Egypt, expressed that group's frustration with the lack of progress.

“A year after the abduction of our four youths while on their way to the Egyptian territories, we are still living on the hope that they are fine. We have asked Egypt to take action quickly to reveal their fate,” he told Al-Monitor. Abu Labda is an uncle of one of the abducted men, Abdel Dayem Abu Labda.

Hamas spokesman and leader Salah Bardawil told Al-Monitor the young men had been abducted "in front of the Egyptian authorities in the security zone of the checkpoints of the Rafah crossing.”

“Therefore, Egypt is held accountable, and it should reveal their detention place. But, so far, it has refused to disclose any information about their whereabouts and their fate," he added.

Hamas sources told Al-Monitor on condition of anonymity, “Egypt is putting tough conditions on Hamas in return for revealing the fate of the abducted men. Egypt wants Hamas to cooperate with it to control the security situation in Sinai, but Hamas has repeatedly refused this demand because it does not want to meddle with the affairs of any Arab state, mainly Egypt.”

Hamas-affiliated al-Resalah newspaper revealed Aug. 25 more of Egypt’s demands: First, Hamas should intervene in Sinai to fight the Islamic State and deploy additional security forces along the Rafah-Sinai borders. Hamas should hand over to Egypt Palestinians who are allegedly involved in Sinai violence. And, finally, the movement should turn over certain men in Gaza who are wanted by Egyptian security forces.

Also fueling tension between Hamas and Egypt is a statement Egyptian Foreign Minister Sameh Shoukry issued Aug. 21, saying he doesn't consider Israeli military operations against Palestinians to be acts of terrorism. The statement obviously was not well-received.

“Whoever does not see the Zionist crimes as acts of terrorism must be blind," Husam Badrana, a Hamas spokesman who lives in Qatar, told Al-Monitor in response to Shoukry's statement, which coincided with Israel's shelling of Gaza on Aug. 21. Shoukry's comments infuriated Palestinians and Arabs, who took to social media to express their anger. It is noteworthy that Shoukry had said May 15 that Hamas-Egypt relations had not seen any progress recently, and he denied claims about Saudi endeavors to alleviate tension between them.

Hani al-Masri, the director of the Palestinian Center for Policy Research and Strategic Studies (Masarat) in Ramallah, told Al-Monitor, “Hamas-Egypt relations are heading downhill, and nothing on the horizon indicates imminent improvement. Egypt has also been trying to instill internal reconciliation in Fatah between Palestinian Authority head Mahmoud Abbas and dismissed Fatah leader Mohammed Dahlan, who have been at odds since 2011. Consequently, Egypt is not interested at the moment in rectifying relations with Hamas, although it does not want to reach a point of no return with the movement. So it is trying to control the situation, even if that means pressuring Hamas.”

Also deteriorating the relationship is Egypt's continued blocking of the Rafah crossing, which has been closed since July 5. This has worsened the humanitarian crisis in Gaza, especially among the increasing number of people who urgently need to travel. The Ministry of Interior in Gaza announced Aug. 27 that Egypt does not intend to open the crossing soon, although the ministry hopes that Egypt will ultimately open it permanently without impediments.

Mushir al-Masri, spokesman for Hamas’ parliamentary bloc in the Palestinian Legislative Council, briefed Al-Monitor on relations between Hamas and Egypt and their future. "Hamas wants to build a strategic relationship with Egypt … by directing their efforts against their common enemy — Israel. Although Egypt and Hamas are still in contact, relations deteriorated because of Egypt. The recent events, including the abduction of the four men [a year ago], Shoukry’s statements and the ongoing closing of Rafah crossing have added insult to injury, although Hamas wants to mend its relations with Egypt, but not as a result of blackmail and pressure.”

It's no longer a secret that Hamas-Egypt relations are closer to disintegration than repair. As long as the reasons behind the crisis — including a worsening rivalry between Hamas and Fatah — remain unaddressed, the relations are unlikely to reach the hoped-for detente. Egypt and Hamas could enter a vicious circle of pressure from Egypt and condemnation from Hamas, with both sides ignoring the potential outcome.