What does de-Baathification mean for Iraq's Kurds?

Given the Baath regime crimes against the Kurds, the Kurdish street is angered at the several scandals, including that the KRG did not react to the law to ban the Baath Party. 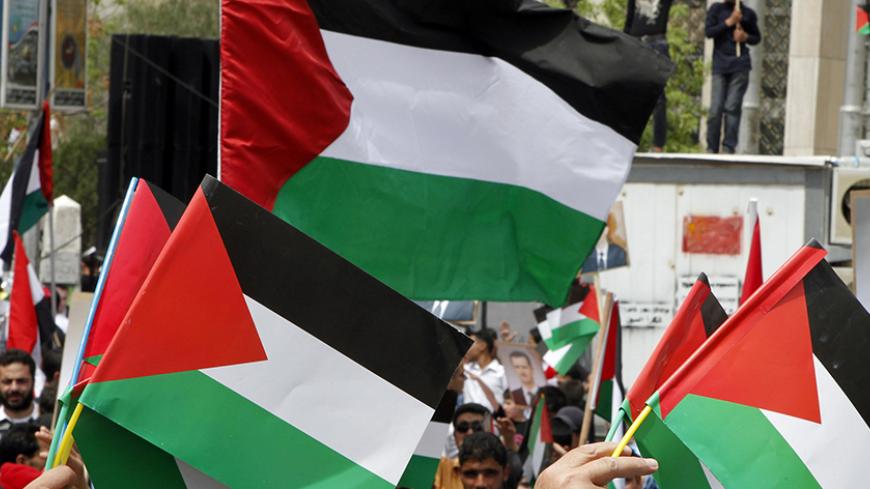 People hold up Baath Party flags during a rally at al-Sabaa Bahrat Square in Damascus, April 7, 2012. There has been anger in Iraqi Kurdistan at a perceived lack of governmental response to the Iraqi parliament's recent decision to outlaw the party. - REUTERS/Khaled al-Hariri

State of Law Coalition parliamentarian Adnan Chahmani said Aug. 6, "The [Shiite] National Alliance is determined to pass the Accountability Law next Tuesday [Aug. 9] to turn the page of the Baath [Party] once and for all at the doctrinal and political levels." He accused the majority of the Sunni Iraqi Forces Alliance's members of supporting "the Baath [Party]."

In the Iraqi Kurdish arena, there were no worthwhile reactions, as the Kurdish people had the lion's share of the oppression and genocide at the hands of the Baath authorities. Although some Iraqi segments still deny crimes committed against the Kurds by the Baath regime — such as the Anfal campaigns that killed more than 180,000 Kurdish people — a law criminalizing this denial has not been passed yet in the Kurdistan Region, similar to the law criminalizing Holocaust denial adopted in Germany and elsewhere.

Not only does the Kurdistan Regional Government (KRG) seem uninterested in the matter of Baath crimes against the Kurdish people, but it is also accused of harboring former Baathists and collaborators in their crimes. Armed Kurdish groups consisting of tens of thousands of fighters, known as the Light Regiments, joined the Baath regime in its numerous crimes against the Kurdish people in the 1970s and 1980s.

All Kurdish armed collaborators of the Baath regime were granted amnesty in 1992 under the amnesty law by the Kurdish parties at the time. They were allowed to have access to key administrative and political posts in the country, and were awarded high military ranks. This had caused resentment among human rights activists who viewed the integration and access of defendants to senior posts in the Kurdish administration as a wrong decision, particularly since some of them are still wanted by the Iraqi High Tribunal.

Websites close to former Prime Minister Nouri al-Maliki accused the KRG of harboring a large number of Baathists persecuted in Baghdad and of using this as leverage during negotiations on contentious matters, leading to objections among the Kurds. Sot Kurdistan newspaper said in this regard that Erbil has turned into "a hotbed for the former and new Baathists."

Yet, the Kurdish street is sharply divided over the presence and integration of Baathists in the Kurdistan Region. A human rights activist who spoke to Al-Monitor on condition of anonymity said, "Dozens of former advisers to the Light Regiments are present within the rank of the three key Kurdish political parties; some were even candidates in the last elections, while others have retired and are obtaining their pension from taxpayers." Even worse, the writer of songs supporting Saddam Hussein, including the famous song titled "Saddam Zera," retired with the rank of brigadier general on July 29, and he ended up enjoying his retirement and leading a prosperous life in the Kurdistan Region.

The activists did not forget the scandal where Tariq Ramadan al-Azzawi, a pilot accused of bombarding the city of Halabja with chemical weapons and who is still wanted by the Iraqi High Tribunal, was smuggled out of or released from his prison cell in Sulaimaniyah on Oct. 28, 2007, under mysterious circumstances.

Activist Najih Gulpy, a member of Chak, was reported as saying in an interview with the al-Ittihad al-Islami newspaper that he still has a letter by senior officials in the Kurdistan Region sent to the authorities of Denmark to release Nizar al-Khazraji, the former regime's army chief of staff, when he was arrested on charges of involvement in the Anfal massacres.

Contrary to Kurdish officials' point of view, Awara Hussein, a professor of genocide studies at Halabja University, said, "There are officials in the Kurdistan Region who were involved or collaborated with the Baathists in the 1980s genocide campaigns. Had the law to ban the Baath Party been implemented, many of them would be forced out."

In this regard, author and journalist Aref Qorbani said, "The authority in the Kurdistan Region is negligent in this regard, and Kurdish parties are protecting some of them due to partisan competition and to gain votes."

Writer and civil activist Ali Mahmoud told Al-Monitor, "Former Baathists are being used as a war machine in the internal battles and in the elections. The war over power is more important than the amassed skulls of the victims" for the Kurdish parties.

As the Kurdish street is preoccupied with political crises and divisions, officials in the KRG have no interest in giving attention to the law banning the Baath Party and to legally prosecute those who collaborated with it in its major crimes.