Misreading of a coup attempt

The amateurism of the attempted coup on the night of July 15 raises questions. 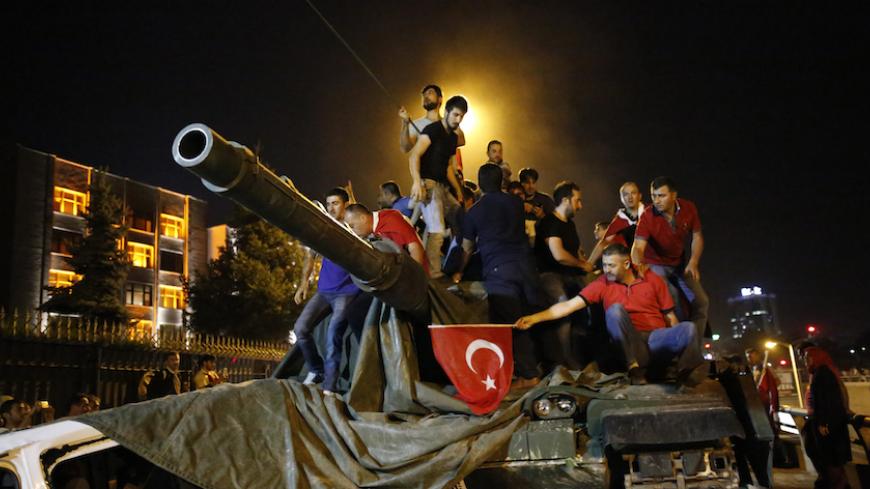 While the Turkish coup was underway, The New York Times was asking me whether I was surprised, expecting my answer to be, “Of course I am.”

I bluntly wanted to respond “No” and remind New York Times correspondent Sabrina Tavernise that only two weeks ago, in our lengthy chat in Istanbul, I had told her of the “Faustian bargain President [Recep Tayyip] Erdogan made with the military, which therefore, in my opinion, opened the way for a coup or a coup attempt to take place in Turkey within the upcoming two years.”

But I conceded and told her, “Yes, I’m surprised. I did not expect that to happen in two weeks.”

More surprising for me is the amateurishness of the attempted coup on the night of July 15. As a veteran observer of military coups and coup attempts in Turkey, I have never seen any with this magnitude of such inexplicable sloppiness.

The first coup occurred on May 27, 1960; the most ferocious one was on Sept. 12, 1980. Another military intervention occurred March 12, 1971 — I was one of its victims — and came to be known as the “postmodern coup.” I was given the reputation of coining this name thanks to a title I had used in one of my articles about the two aborted coup attempts in February 1962 and May 1963 that led to exchanges of fire in my neighborhood in Ankara, as our house was overlooking the premises of the War Academy, whose cadets had taken part in the failed attempts. Neither one of those occasions seemed so unprofessionally executed and really bizarre as this one.

Everyone observing the last attempt could not help but ask, “What is this? Who is behind this? What are they doing? Why?”

In no previous military coup or coup attempt in Turkey’s history has parliament been bombed by military helicopters and fighter jets.

Why did the coup attempt begin with blocking one side of Istanbul's Bosporus Bridge? Why was the passage from the Asian side to Europe blocked while the passage from Europe to Asia was allowed to flow?

Why did the putschists — knowing that Erdogan was neither in Ankara nor Istanbul but instead spending his vacation in the Mediterranean seaside town of Marmaris — not move to detain him? They let him travel from Marmaris to the nearby Dalaman airport and then fly to Istanbul on a flight that took over an hour.

Why did the putschists not seize the main TV news channels and instead waste precious time taking over the least-watched state TV channel, TRT, allowing their targets to regroup and use more popular channels and social media effectively to challenge the coup attempt?

Prime Minister Binali Yildirim spoke first on the NTV channel, alleging that it was not a coup but a rebellion perpetrated by a small faction in the military. Erdogan then spoke through CNN-Turk via FaceTime and called on his supporters to take to the streets.

Seemingly a headless and disoriented coup attempt crumbled after a few hours, leaving 265 dead, some 1,440 wounded and at least 2,839 military personnel in custody.

The failed attempt left more questions behind rather than plausible answers as to who perpetrated it and why it was executed so sloppily and poorly.

Although the coup attempt foundered, the damages inflicted are grave. First, the reputation of Turkey as the bastion of stability in a volatile region where military takeovers are a relic of the past is over. The country’s image is tarnished, and nobody can assure impossibility of a coup or a coup attempt in the future.

Erdogan and Yildirim unhesitatingly pointed to Fethullah Gulen, a cleric and former ally who has lived in self-imposed exile in Pennsylvania for the last 18 years. The Turkish leaders implied that they would seek his extradition from Washington.

I read a tweet from AFP's White House correspondent Andrew Beatty that Kerry offered US help in investigating the coup and urged Erdogan to present evidence against Gulen.

It is a challenging task indeed. It is not very convincing that key positions in the military of Turkey — a NATO force second only to the United States in terms of its numbers and believed to be a formidable institution — are controlled by an Islamic faction.

Over 40 generals are among some 3,000 putschists arrested. One of them is a four-star general who commands the second army responsible for the regions next to Syria and Iraq. Dozens of brigadiers and major generals commanding mainly combat troops of land forces, gendarmerie units fighting Kurdish insurgents, and combat units of the navy and air force can hardly be classified as Gulenists. Another four-star general — a commander of the third army — was also arrested yesterday. The first army commander, who is in charge of defending Istanbul and had declared his allegiance to the government on the night of the coup, asked Erdogan to come to Istanbul where his safety would be assured, thereby playing a decisive role in the collapse of the attempt.

Twenty-four hours had not passed after the collapse of the coup attempt when 140 judges — judges of the Court of Appeals and 48 judges of the Council of State, two of the highest judiciary institutions — were taken into custody. Summarily purged from the judiciary apparatus were another 2,475 judges. A member of the Constitutional Court, the highest institution of the judiciary, was arrested and charged with association with the putschists.

The swiftness and scope of the action of the executive branch was remarkable. It gave the impression that Erdogan and the government were prepared for a coup attempt and had ample intelligence as to who in the state system would be associated with it.

Looking at the 2,839 military personnel under arrest, including scores of generals who commanded the combat units of a NATO army, it is quite bizarre that no security bureaucracy from the military intelligence to the National Intelligence Organization, the General Directorate of Security and Special Forces Command had a clue that a coup was being hatched at such a magnitude.

Such matters awaiting convincing answers naturally aroused conspiracy theories. A particular interesting one is this: "The way you launch a coup is pretty straightforward. First you grab the leader, then the media outlets, then you exhibit the humiliated leader in the media. Instead, these people decided to throw the coup while Erdogan was on vacation and apparently didn’t even attempt to secure him. By the time the coup began, he was already taken to a secret location. Then the whole thing went straight to hell very quickly. The coup told people to go home, while Erdogan told his people to go to the streets. So the coup supporters were at home, while the Erdogan supporters were out on the streets. The coup also reportedly fired on civilians, which is also something you definitely do not want to do. That makes even people who were inclined to support it turn against it. In short, the whole thing could not have been better arranged for Erdogan himself, who now looks like a hero of the people. As such, it seems to me the most likely possibility is that Erdogan — presumably with the blessing of Western forces — worked with some of his own people in the military to arrange a coup hoax."

It sounds outrageous to everybody who is in a mood to celebrate the victory of democracy over a military coup, the victory of the people over a “handful of traitors,” to suggest that the attempted Turkish coup actually was an arranged coup hoax.

As long as more questions than convincing answers remain and until the dust clears, an abundance of such conspiracy theories should not be surprising.